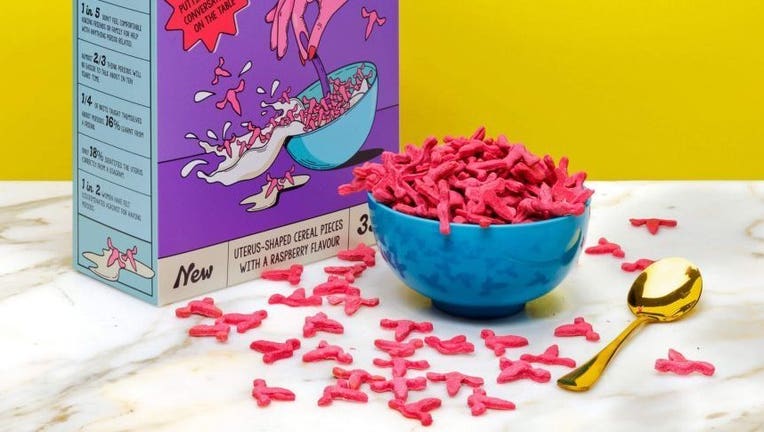 LOS ANGELES - One company is hoping to kill the social stigma surrounding the intimate topic of female menstruation by discussing it in another intimate location, the kitchen.

Intimina, a company that provides "a comprehensive collection of products and information for women," according to its website, has just unveiled its newest line of uterus-shaped "Period Crunch" cereal.

The company says the product was created out of a necessity to normalize the very normal and regular act of menstruation that millions of women experience every month.

"In order to fight the stigma around menstruation, it’s important to talk about it! A unique menstrual-themed breakfast cereal called Period Crunch has been created to raise awareness of the lack of conversations about periods in the home," the company wrote on their website.

According to Intimina, nearly half of all people are too embarrassed to talk openly about menstrual topics.

Additionally, the company notes that 82% of people cannot correctly identify the location of the uterus on the body.

Luckily now for those people, the raspberry-flavored cereal "accurately resembles" the structure of a uterus. Milk even turns red when mixed with the breakfast food.

The company hopes the new product will make the taboo topic a more palatable one.

"The cereal has been uniquely designed to act as a conversation starter for people of all ages and put the spotlight on the ongoing social barriers around period conversations," the company writes.

Consumers can register to receive a box of "Period Crunch" cereal by emailing the company at periodcrunch@thisiscow.com.