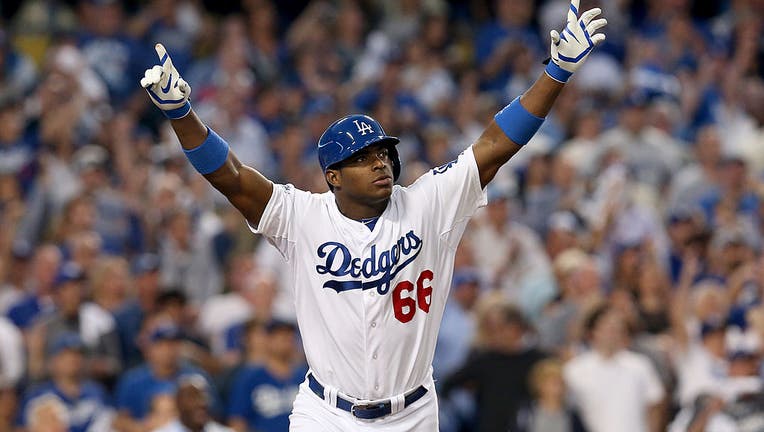 LOS ANGELES, CA - OCTOBER 14: Yasiel Puig #66 of the Los Angeles Dodgers reacts as he hits a RBI triple in the fourth inning against the St. Louis Cardinals in Game Three of the National League Championship Series at Dodger Stadium on October 14, 201

A representative for Puig, who is now a free agent, could not be immediately reached.

The alleged attack happened during a Laker game at Staples Center on Oct. 31, 2018. The plaintiff did not know Puig and met him briefly while watching the basketball contest in the VIP lounge, according to the suit.

Roe alleges Puig grabbed her and forced her into a bathroom in the Chairman's Room lounge. Puig tried to pull off her clothes, touched her inappropriately and pinned her with one arm while he committed a lewd act, the suit alleges.

"The defendant is a professional athlete who used his celebrity status to intimidate and sexually assault a stranger,'' plaintiff's attorney Taylor Rayfield said. "His brazen attack has caused emotional and psychological injuries to our client which have severely impacted her life.''

Roe said she is coming forward and filing the lawsuit because she believes she is not Puig's only such victim, and suspects more women have suffered from similar assaults.

"I was in complete shock because it all happened so fast,'' said Roe.

"It was terrifying and humiliating and I don't want anyone else to have to suffer the same kind of trauma that I'm experiencing.''

The 29-year-old Puig signed a seven-year, $42 million contract to play for the Dodgers in 2013. Most recently, the outfielder played for the Cincinnati Reds and Cleveland Indians.