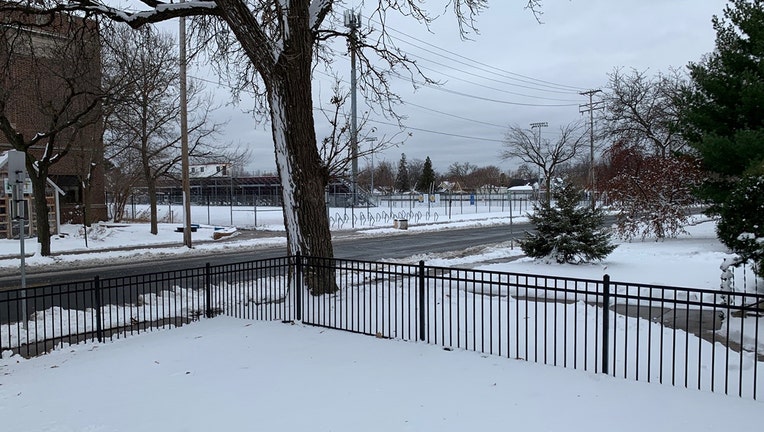 MINNEAPOLIS - A day after bringing havoc to the Rocky Mountains, a powerful winter storm rolled across the Midwest on Wednesday, threatening to scramble Thanksgiving plans for millions of people during one of the busiest travel weeks of the year.

The storm, which was blamed for one death and hundreds of canceled flights, pushed east into South Dakota, Iowa, Michigan, Minnesota and Wisconsin. But the West was not free of heavy weather. A "bomb cyclone" phenomenon was expected to topple trees and knock out power in California and Oregon.

"It's one of those things, you couldn't make it up if you tried," National Weather Service meteorologist Brent Hewett said of back-to-back storms forming around the holiday.

The bomb cyclone — a system that brings a rapid drop in air pressure —brought snow to the mountains and wind and rain along the California and Oregon coasts. Snow and downed trees and power lines closed multiple roads in southern Oregon. Others were reduced to a single lane, the state Department of Transportation said. 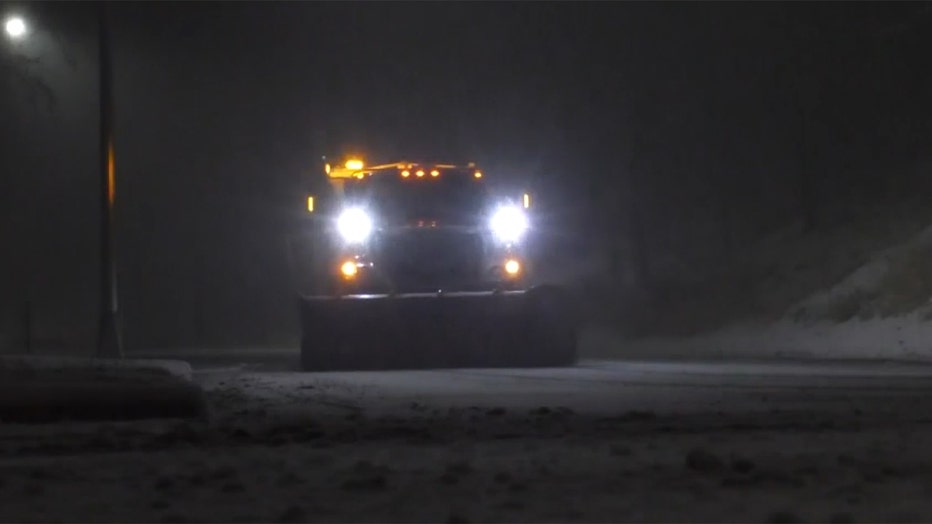 A vehicle plows snow on a street in Minneapolis.

Meanwhile, parts of the Midwest expected more than a foot of wind-whipped snow. The one-two punch made travel difficult or impossible in some places. Even those who left early were confronted with icy and snow-covered roads.

By mid-morning, Dell Rapids had already received 6 inches of snow. Many areas around Sioux Falls had about 4 inches, the National Weather Service said.

Stranded travelers took shelter at hotels. In Minnesota, officials warned drivers to stay off the roads at least until the winds died down.

Children from South Dakota to Wisconsin got an early start on their holiday weekend, waking up to the news that dozens of school districts canceled classes. The University of Minnesota campus in the Twin Cities also called off classes starting late Tuesday.

The storm could dump 6 inches (15 centimeters) of snow in central and southern Minnesota. Some areas could see a foot (30.5 centimeters) or more, Hewett said.

In neighboring Wisconsin, as much as 20 inches (51 centimeters) was possible in the far northern reaches of the state.

At the Minneapolis airport, Delta Air Lines prepared by filling de-icing tanks, calling in extra flight dispatchers and assigning some of its 20 in-house meteorologists to focus on the Minneapolis forecast. 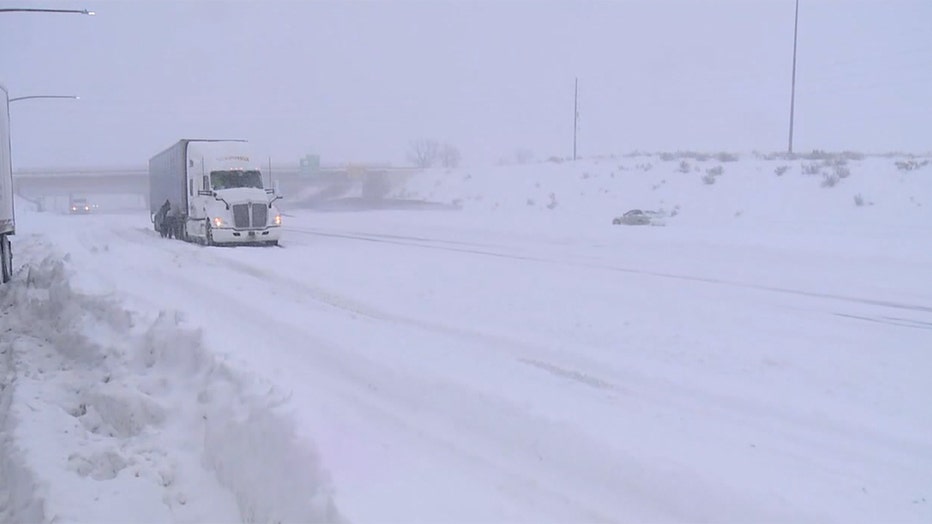 To the south, in the Milwaukee area, where the temperature climbed to 50 degrees (10 degrees Celsius), the storm brought rain and winds up to 35 mph (56 kph). Forecasters said another storm could arrive this weekend, just as people are returning from Thanksgiving.

On Tuesday, weather-related damage was widespread. Authorities on both sides of the California-Oregon border reported numerous vehicle crashes and closed roads.

At Denver's main airport, about 10 inches (25 centimeters) of snow mixed with winds that limited visibility and canceled about 30% of the airport's 1,600 average daily flights.

Southwest Airlines canceled about 200 flights. Spokesman Brad Hawkins said it would take a couple of days to rebook stranded passengers on other flights because there are few empty seats during the pre-Thanksgiving travel crush.

About 1,100 people spent the night at the airport, including many cadets from the Air Force Academy near Colorado Springs who either missed flights or wanted to get to the airport before road conditions deteriorated, airport spokeswoman Alex Renteria said. 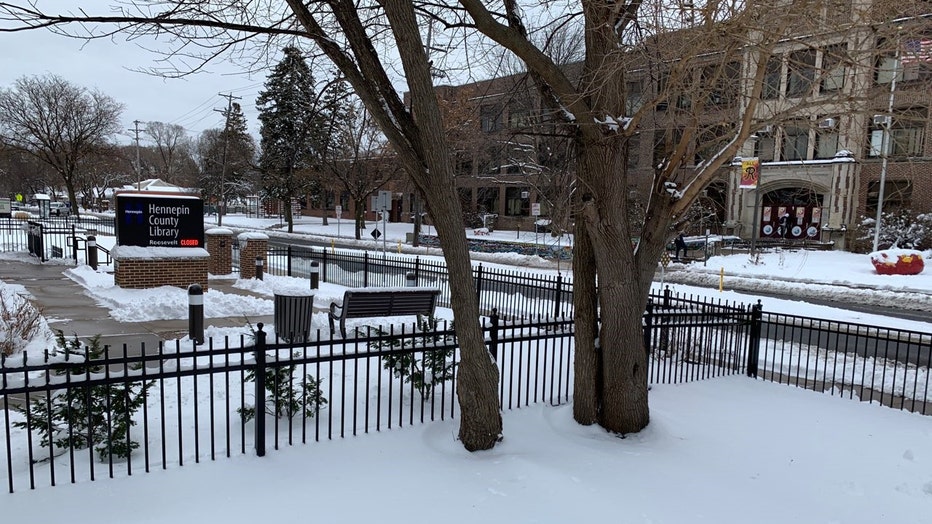 A snow-covered street in Minneapolis, Nov. 27, 2019. (Courtesy of Lisa Pomarico)

Airport workers handed out blankets, diapers, baby formula, toothbrushes and toothpaste to passengers who camped out on floors and in chairs.

The storm dumped nearly 3 feet (1 meter) of snow in parts of northern Colorado and closed long stretches of highways there and in Wyoming. One person was killed, when a tractor-trailer jackknifed and was hit by two other trucks on Interstate 70 near the ski town of Vail.

Before it's over, the storm's effects could extend to New England, where a chance of snow was possible over the weekend, said Alex Lamers, a National Weather Service meteorologist.

"That could be a coast-to-coast storm," he said.

In New York, the system could mean disappointment for fans of the larger-than-life balloons flown at Macy's Thanksgiving Day Parade.

Organizers prepared for the possibility of grounding the iconic balloon characters because of 40 to 50 mph (64 to 81 kph) wind gusts in the forecast. Rules adopted after several people were injured by a balloon years ago require the balloons to be flown lower or not at all if sustained winds exceed 23 mph (37 kph) and gusts exceed 34 mph (54 kph). The decision will be made on parade day. 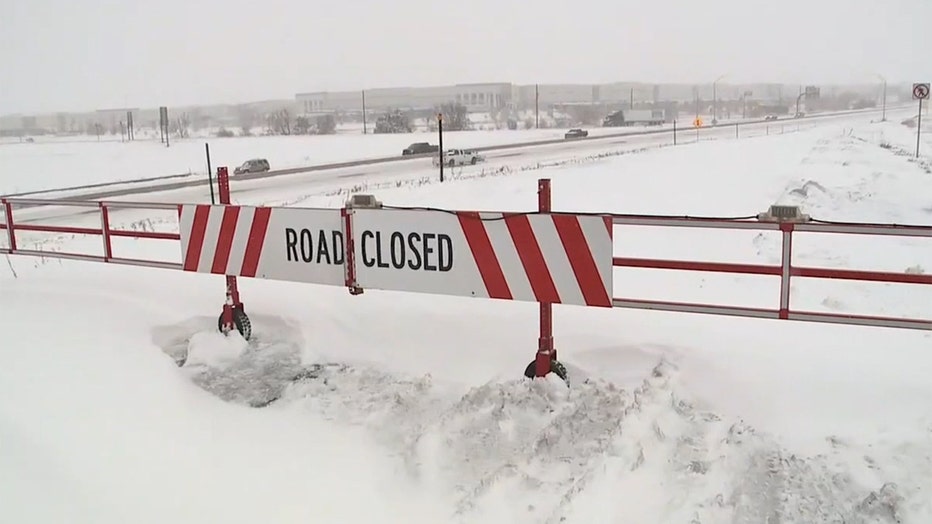