Another winter storm is set to bring heavy snow and ice to parts of the Mid-South and Northeast U.S. beginning Thursday and into Friday, just days after a previous storm dumped snow and even stranded many along a portion of Interstate 95 in Virginia.

Forecasters with the National Weather Service said several inches of snow and any ice could result in "widespread hazardous travel."

Virginia Gov. Ralph Northam declared a state of emergency in advance of the next storm, as the state is still dealing with the impacts of Monday’s blizzard.

"While we typically have ample resources for snowstorms, these back-to-back events will generate landmark winter weather that requires extra flexibility," Northam said in a statement shared Wednesday. "I am grateful to the hundreds of first responders and emergency personnel who continue to work around the clock to keep Virginians safe."

Snow or a wintry mix will start by Thursday morning over the Mid-South from northeastern Arkansas into West Tennessee and northern Mississippi, including the Memphis, Tennessee, metro area, according to FOX Weather. Untreated roads, particularly bridges and overpasses, could turn slippery during the morning commute in these areas.

Rain is expected in the Deep South, though some snow, sleet or freezing rain could mix in as far south as northern Alabama and northern Georgia, FOX Weather says.

Earlier this week, parts of the Florida Panhandle saw flurries.

By Thursday night, snow will continue in the central and southern Appalachians while also spreading into the mid-Atlantic and southern and central New England, meteorologists say. This includes the entire Interstate 95 corridor from Boston to New York City, Philadelphia, Baltimore, Washington and Richmond, Virginia.

The snow could turn heavy at times as the low-pressure system responsible for it strengthens near the East Coast, according to FOX Weather.

Travel conditions will be hazardous throughout this region from Thursday night into Friday morning. Drivers heading to work on Friday will likely face falling snow and snow-covered roads along the I-95 corridor between Boston and Washington, FOX Weather says.

Snow will gradually taper off in the mid-Atlantic through Friday morning, but it may linger much of the day in New England before ending Friday evening. The storm will dissipate in the Northeast by Friday night. 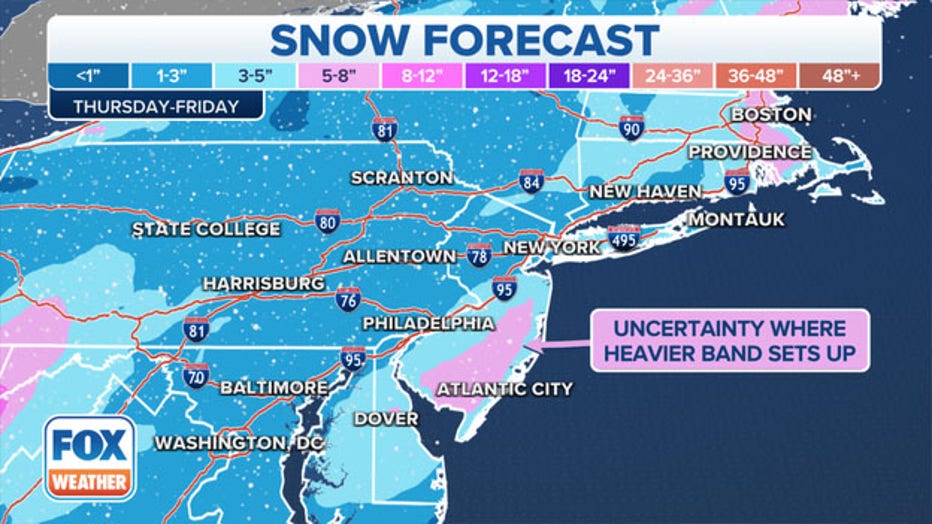 Predicted snowfall amounts for parts of the U.S. East Coast on Thursday and into Friday. (FOX Weather)

How much snow will there be?

Between 1 and 3 inches of snow is forecast for many areas of Tennessee and Kentucky, including Nashville, Knoxville and Louisville, FOX Weather meteorologists say. Less than 1 inch is expected in Memphis.

The higher elevations of the central and southern Appalachians could see snowfall totals on the order of 3 to 6 inches, with some spots in eastern Kentucky, West Virginia and the Great Smoky Mountains picking up more than 6 inches of snow.

At least 1 to 3 inches is expected along much of the I-95 corridor from New York City to Philadelphia and Washington, FOX Weather says.

Parts of coastal New England, including the Boston metro area, could see 3 to 6 inches of snow or more, depending on the exact track of the storm in relation to the East Coast.

"As the low moves off the Mid-Atlantic coast Friday morning and rapidly deepens offshore, accumulating snow will also spread into the Mid-Atlantic and the Northeast, where a few inches are possible," the National Weather Service said. "Higher amounts may be realized across eastern portions of New England, but exact amounts remain uncertain and highly dependent on the exact track of the low off the coast.

If at least 1 inch of snowfall is recorded in New York and Boston, it will be the first 1-inch snow event of the season for both cities, FOX Weather noted.

Snowfall pelted down over Buffalo, New York, on the morning of Jan. 6, 2022. Credit: Chris Luft via Storyful

Pack an emergency kit for the car

Incidents like the I-95 freeway shutdown, where some drivers were left stranded in their vehicles for hours, are exactly why everyone should keep an emergency kit in their car at all times.

Emergency supply kits should be checked every six months and expired items should be replaced regularly, says the National Safety Council, a U.S. nonprofit safety advocate.

RELATED: How are roads pre-treated? A look at winter storm prep after Virginia's I-95 shutdown