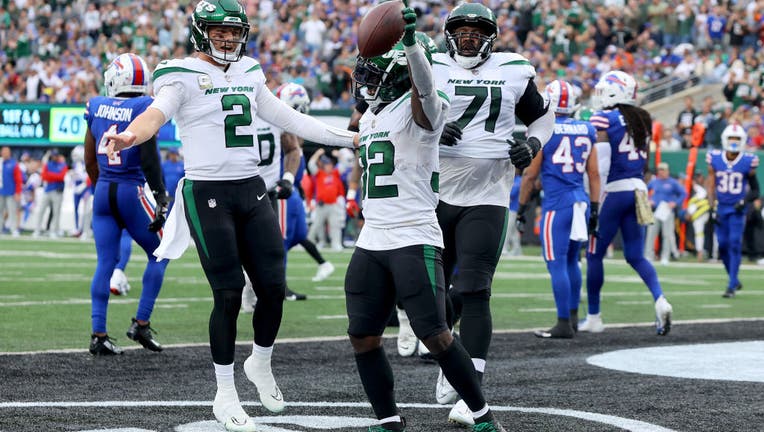 EAST RUTHERFORD, NEW JERSEY - NOVEMBER 06: Michael Carter #32 of the New York Jets celebrates a rushing touchdown in the first half of a game against the Buffalo Bills at MetLife Stadium on November 06, 2022 in East Rutherford, New Jersey. (Photo by

After marching downfield to the Bills 18 on eight straight running plays against a weary Buffalo defense, Wilson connected with Denzel Mims for 12 yards on third-and-5. But the drive stalled when Wilson was sacked by Damar Hamlin on third down and the Jets settled for Zuerlein’s field goal.

Allen got the ball with a chance to tie or win, but couldn't manage much against the Jets (6-3). A holding call on Dion Dawkins wiped out a long pas to Stefon Diggs. Two plays later, Bryce Huff had a strip-sack of Allen that Buffalo recovered at its 14. 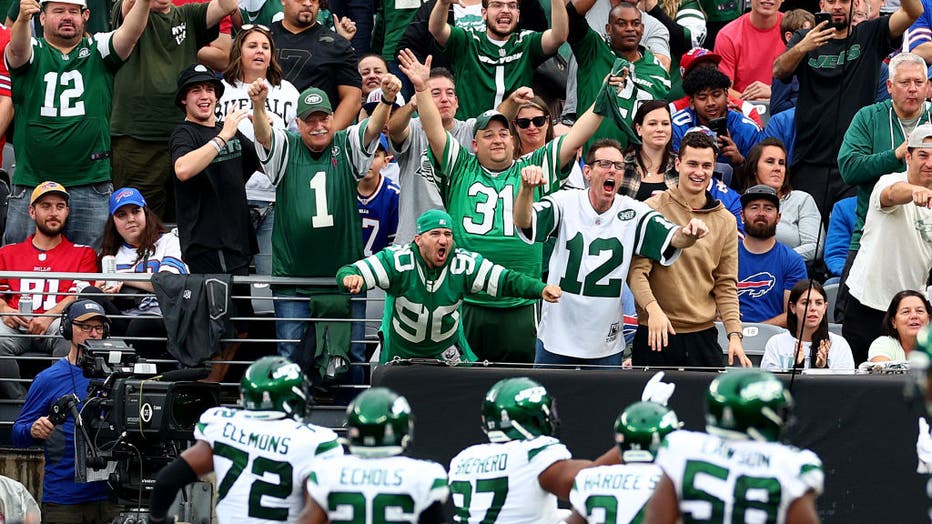 After an incompletion to Diggs, Allen launched a deep desperation pass to Gabe Davis — but rookie Sauce Gardner knocked the ball away and sealed the unlikely victory for the Jets. It also ended the Bills' four-game winning streak.

New York heads into its bye-week break just a half-game behind AFC East-leading Buffalo (6-2). The Jets even overcame a brief delay in the second half when an overhead camera malfunctioned.

"It only happens to the Jets," a smiling coach Robert Saleh said. 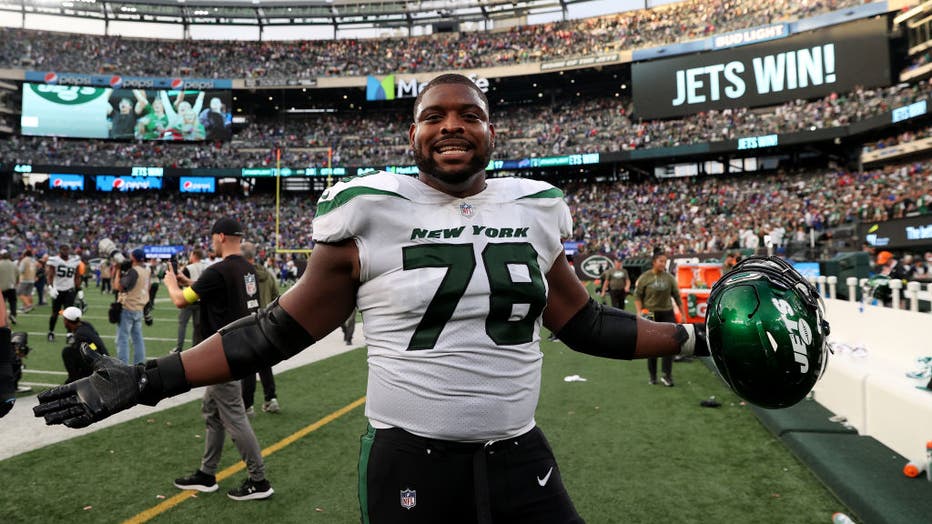 Wilson finished 18 of 25 for 154 yards and a TD pass to James Robinson, who scored for the first time since being acquired last week from Jacksonville. Michael Carter had a 6-yard touchdown run.

But the defense did its job against Allen, intercepting him twice and sacking him five times. Allen was 18 of 34 for 205 and the INTs by Gardner and Jordan Whitehead. He also ran for two touchdowns.

Wilson and the Jets’ offense were marching downfield on their opening drive of the second half when a SkyCam camera whirled out of control and delayed the play on the field for 12 minutes until a camera operator was able to corral it. 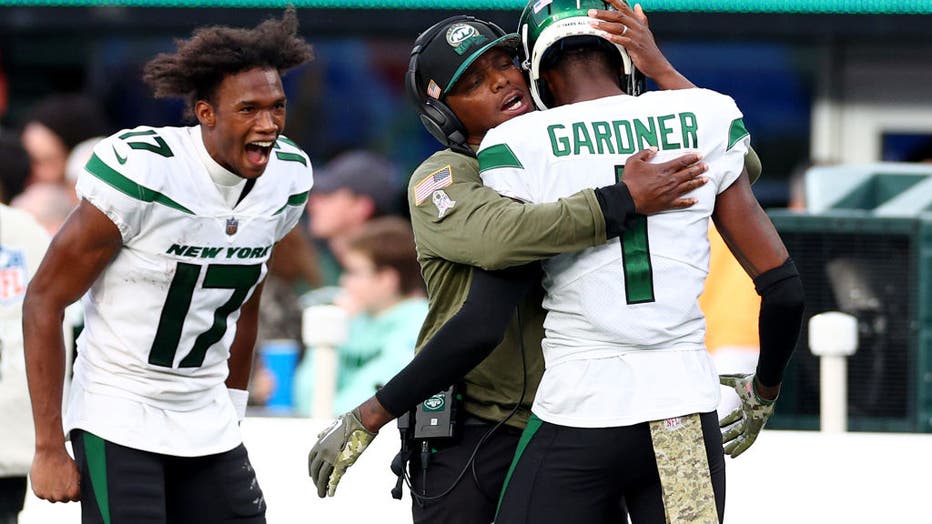 EAST RUTHERFORD, NEW JERSEY - NOVEMBER 06: Sauce Gardner #1 of the New York Jets celebrates with coaches and teammates in the second half of a game against the Buffalo Bills at MetLife Stadium on November 06, 2022 in East Rutherford, New Jersey. (Pho

The teams resumed play, but the Jets were immediately called for a false start penalty. Three plays later, Wilson was sacked by Von Miller and his fumble was recovered by A.J. Epenesa to give Buffalo the ball.

But then New York's defense stiffened, with Quinnen Williams sacking Allen and then Gardner coming up with an interception to give the Jets the ball back at the Bills 19. Wilson's 7-yard pass to Robinson put the Jets ahead 17-14 with 4:03 left in the third quarter.

After Allen was intercepted by Whitehead on the Bills' third play from scrimmage, Buffalo converted three third-down plays on its next drive, including an 11-yard run by Allen that was initially ruled a touchdown before video review showed he was just short of the goal line. On the next play, the Bills quarterback pushed forward to give Buffalo a 7-0 lead. 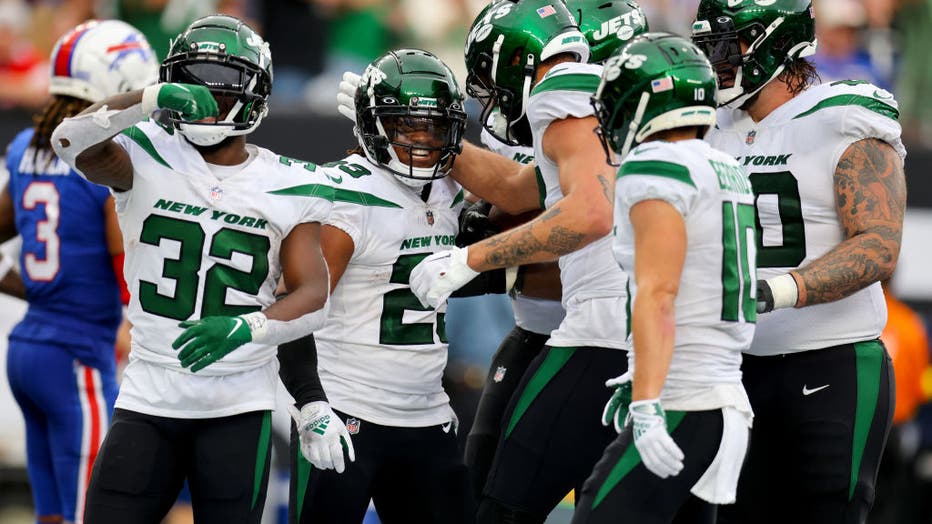 Allen's second touchdown run came with 6:30 left in the first half on a 36-yard scamper — the longest TD run of his career.

Coming out of the two-minute warning, Wilson hit C.J. Uzomah for 5 yards on fourth-and-1 to put the Jets at the Bills 27. Three plays later, Carter had a 10-yard catch and followed with a 6-yard run up the middle to cut New York's deficit to 14-10.

The Bills had a chance to add to their lead, but Bass' 55-yard attempt was wide right as time expired in the half.

Bills: Edge rusher Greg Rousseau left in the first half with an ankle injury. ... CB Kaiir Elam injured an ankle in the third quarter. ... CB Tre’Davious White was activated from injured reserve this week and didn't appear on Buffalo's injury report, but was inactive. ... LB Matt Milano (oblique) sat out after being questionable.

Bills: Return home to take on the Minnesota Vikings next Sunday.

Jets: Head into their bye-week break before a rematch with the AFC East rival Patriots in New England on Nov. 20.