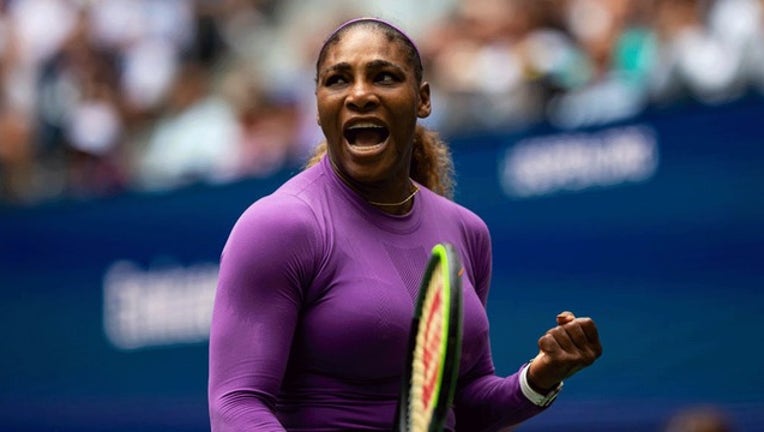 NEW YORK, NEW YORK - SEPTEMBER 01: Serena Williams celebrates during her match against Petra Martic of Croatia in the third round on Arthur Ashe Stadium at the USTA Billie Jean King National Tennis Center.(Photo by TPN/Getty Images)

NEW YORK (AP) -- Serena Williams was in pain -- "acceptable" pain, her coach called it -- after rolling her right ankle during the second set of a U.S. Open victory.

That was the bad news.

The good news for Williams as she pursues a seventh championship at Flushing Meadows and 24th Grand Slam singles title overall is that, while she reached the quarterfinals by beating No. 22 seed Petra Martic 6-3, 6-4 despite the ankle issue, No. 2 Ash Barty and No. 3 Karolina Pliskova both exited her side of the bracket Sunday.

Not that Williams seemed to care all that much about being one of only three of the top 12 seeded women who will still be around Monday.

"I can't afford to look at it that way. Every single match I have played, people come and they play their best.

The women that I play are not generally playing at this level against other players in the locker room, so for me, I have to be the greatest, whether it's against the second seed, the No. 1 seed, or the No. 80th player in the world," said Williams, who faces No. 18 Wang Qiang next. "I have to show up or else I'm going to go home."

Williams, who turns 38 this month, appeared to be cruising along to a straightforward victory when she took an awkward step while up at the net for a volley.

She tumbled to the ground and sat there, cross-legged, right in the middle of Arthur Ashe Stadium for a few moments.

Williams has dealt with various health issues all season, including one that ended her stay at the Australian Open. Might that sort of thing be happening again?

Williams immediately asked for a trainer, who added tape to her lower right leg and foot during a medical timeout at the ensuing changeover. Still, Martic thought Williams' play might actually have improved the rest of the way.

"She started going for even more, I think. She felt like maybe she couldn't move that well anymore," Martic said. "Her shots were really precise. Serve was unbelievable. And when she hits those backhands and those first serves that well, it's not easy to play against her."

Williams ended things by raising both arms after smacking an ace at 118 mph, her fastest of the afternoon, punctuating an overpowering performance that included 38 winners to Martic's 11. "I didn't know what to expect from her ball. I knew she (hits it) hard," Martic said, "but until you feel it on your own racket, you just don't know what to expect." The scene Sunday brought back memories of Williams' Australian Open quarterfinal in January against Pliskova.

From there, Williams was no longer, well, Williams, dropping every point she served the rest of the way. She failed to convert four match points in all that day, ceded six games in a row and lost 7-5 in the third.

That time, Williams didn't call for a trainer, which surprised many. Didn't make that mistake this time. And a couple of hours later, she was walking without any apparent hitch in her step. She figured she'd know more about the ankle based on how it responds Monday; she plays Wang on Tuesday.

Williams has not managed to complete a non-Slam tournament in 2019, withdrawing from each with one ailment or another, including a viral illness, a hurt left knee and, most recently, back spasms.

She hasn't won a title since returning to the tour after having a baby; her daughter, Olympia, was born exactly two years ago Sunday.

This is the only Grand Slam tournament where Konta has yet to reach the semifinals; she'll now meet No. 5 Elina Svitolina of Ukraine, who got past 2017 runner-up Madison Keys of the U.S. 7-5, 6-4 Sunday night.

That was followed by defending champion Novak Djokovic against Stan Wawrinka in Sunday's last singles match, with the winner to face Daniil Medvedev. Reprising his trolling role at Louis Armstrong Stadium, the No. 5-seeded Russian again begged the crowd to boo him even more after he beat qualifier Dominik Koepfer 3-6, 6-3, 6-2, 7-6 (2).

"You give me so much energy to win. Thank you!" he said, similar to his interaction with jeering spectators after his third-round win. "You are the best!" Earlier Sunday, Roger Federer kept up his recent surge, dominating No. 15 seed David Goffin 6-2, 6-2, 6-0 in just 79 minutes. That's one fewer minute than it took him to put together a 6-2, 6-2, 6-1 win against Dan Evans in the previous round. "I mean, look, sometimes these scores just happen. You catch a good day, the opponent doesn't, then things happen very quickly," said Federer, who lost in the fourth round a year ago in New York but also earned five of his 20 major championships at this hard-court tournament.

"Maybe he struggled a bit early on. But I found my groove after a while and was able to roll, really. Never looked back." Goffin's perspective? "You don't know why you're missing everything, easy balls," Goffin said. "All of a sudden, he's playing well."

Federer next takes on Grigor Dimitrov, a two-time major semifinalist who is unseeded at Flushing Meadows. Currently coached by Andre Agassi and Radek Stepanek, Dimitrov eliminated Alex de Minaur 7-5, 6-3, 6-4 to reach his first U.S. Open quarterfinal. Federer is 7-0 against Dimitrov.

"Given the history of me and Roger, how we've played the past years," Dimitrov said, "nothing (favors) me."