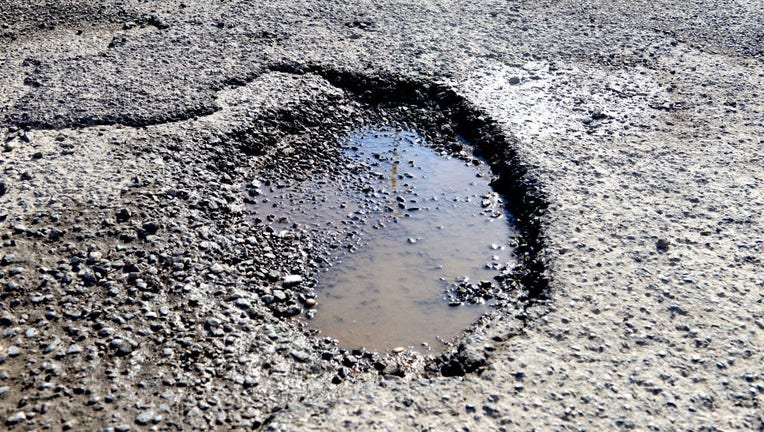 FILE - A pothole filled with water in a road on June 10, 2022, in London, England. (Photo by Peter Dazeley/Getty Images)

Happy National Pothole Day – it turns out there is a day for everything. Sunday January 15, some celebrated, or more realistically, loved to hate potholes. Those road craters cost car owners $26.5 billion in car repair costs for 2021, according to AAA. But did you know you might not be on the hook for all of it?

What can a pothole do to my car?

"When a vehicle hits a pothole with any kind of force, the tires, wheels and suspension get the brunt of the impact and fixing any of those items is pricey," Greg Brannon, AAA’s director of automotive engineering, said in a statement.

The auto club estimates drivers pay an average of around $600 per for repair work. They also estimated one out of every ten drivers in 2021 sustained vehicle damage significant enough they needed immediate repairs after hitting a pothole.

"I have multiple customers come in with dented wheels that are beyond repair or tires that are definitely blown out caused by potholes," tire shop owner Zach Leeper told FOX Weather’s Will Nunley.

Even minor damage at the time can eventually result in a dangerous tire blow-out.

"There are internal belts inside your tire and when you hit that pothole, of course it breaks those belts because those belts are made out of steel and nylon, and it severs them immediately or a little ways down the road," said Leeper of the sharp strands digging holes into your tire as you continue to drive. "That tire may completely blow out then, or if you hit the pothole in just the right spot and hard enough, it can blow out instantly." 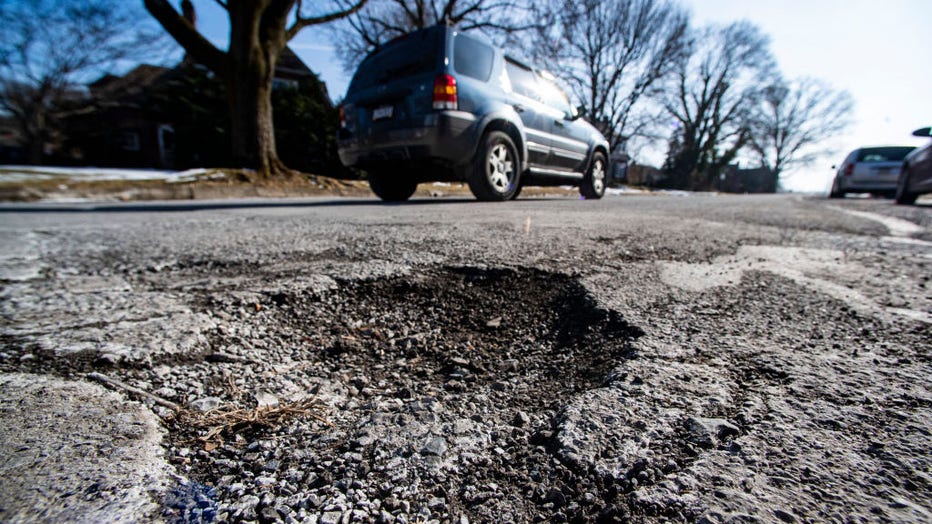 FILE - A pothole in the street on Feb. 2, 2022, in Spring Township, PA. (Photo by Ben Hasty/MediaNews Group/Reading Eagle via Getty Images)

Most vehicles are built to hold up to the worst road conditions. But State Farm advises checking out your car after hitting a very large or deep pothole. The hole can also damage your car’s steering, suspension and alignment.

"Some signs of pothole damage might include a pulling sensation in one direction, dents in your tires or rims, or low tire pressure," said Heather Paul, State Farm Public Affairs Specialist in a statement.

After you hit a pothole, Leeper suggests checking your tire.

"Make sure there are no bulges on the actual tire itself or dents in the wheel," Leeper said. "And then it's best, when you get the chance, to get your vehicle realigned to keep from damaging your tire even further."

Who pays for pothole damage?

Collision insurance usually covers pothole damage after you pay the deductible. But, do your homework, it may not be worth putting in the claim.

"Since the pothole damage your vehicle may incur could fall below the amount of your deductible, typically $500 or $1,000, it may not always be practical to file a claim," said Paul.

Some cities, counties or states may pay for the pothole damage.

HOW TO WATCH FOX WEATHER

"A driver who has had pothole damage needs to determine which jurisdiction is responsible for the road and inquire about compensation for pothole damage," said Paul. "The driver may need photos of the damage and the pothole plus an estimate or two for the claim. Be aware there may be a time limit for compensation so don’t wait to file a claim."

A man from Kansas City who had been complaining about a pothole in his neighborhood for several months finally figured it wasn’t going away anytime soon, so he decided to throw it a birthday party.

For example, Tennessee’s Department of Transportation has a hotline for reporting potholes. Drivers can also go online to fill out a maintenance request for road repair. You will need the route, mile marker and nearby cross streets or interchanges to complete the form.

Owners of the damaged cars can file a claim, online through the Tennessee Department of Treasury. An investigator will review your proof that the damage resulted from the state’s negligence in inspection, maintenance or construction of state-maintained highways or bridges.

GETTING YOUR TIRES READY FOR WINTER

You will also need to show proof that the state officials had prior notice and the time and ability to fix the issue before you hit the hole.

You can help others recoup dollars by "paying it forward" advises State Farm.

"If you notice a road that has potholes, you can report the roadway hazard to your local city or county transportation department, so they are aware of the issue," stated State Farm. 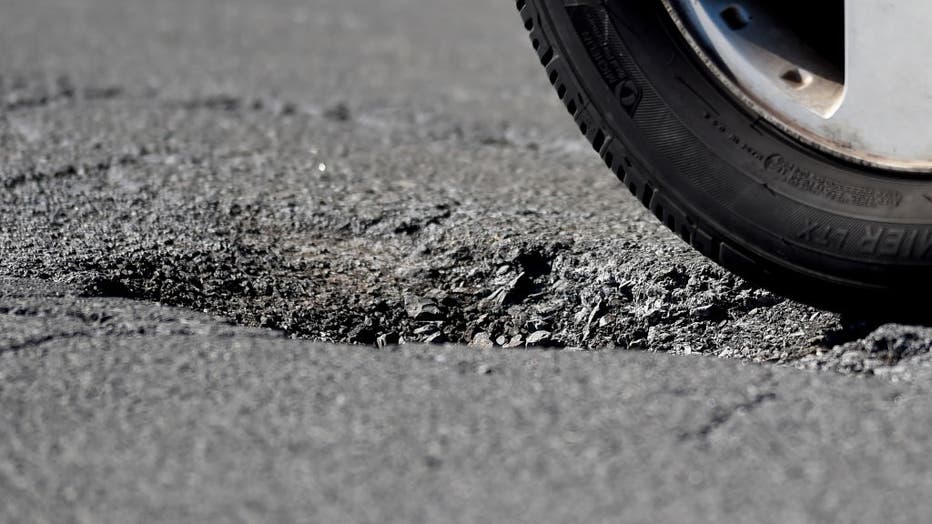 FILE - A pothole in the street in Reading, PA, on Feb. 25, 2021. (Photo by Ben Hasty/MediaNews Group/Reading Eagle via Getty Images)

Finally, hang on to warranties when you replace tires. Most standard tires come with a warranty. Tire stores may offer an additional warrantee as well. Look into adding tire and wheel insurance which may also come as an option with roadside assistance policies.

DRIVING ON THE ICE AND SNOW: WEATHER DRIVING TIPS FOR INCLEMENT WEATHER

Why are there so many potholes?

Potholes form when constant traffic wears down the road. Water seeps into the cracks and pools under the asphalt. Water expands when it freezes, further weakening the road. Ice melts and the water flows away leaving a gap under the surface. More traffic continues to breakdown the road in that area and the pothole forms.

The recent Report Card for America’s Infrastructure stated that 43% of the country’s public roadways are in poor or mediocre condition. The report estimates that Americans travel on roads in poor condition 17% of the time.

And the pothole population will no doubt grow after the extreme weather the U.S. has seen so far this winter. The holiday snowstorm and arctic blast sent freezing temperatures all the way south into Florida. Just as quickly a spring-like thaw took over resulting in rushing floodwaters eroding road foundations.

Atmospheric river-fueled storms in the west are also beating up on roads. Several cities across California have seen over a foot of rain in just 3 weeks. Pavement is cracking and in some cases actually sliding down hillsides. Sinkholes caused by runoff start small but eventually swallow cars. The pictures and videos have been astounding. 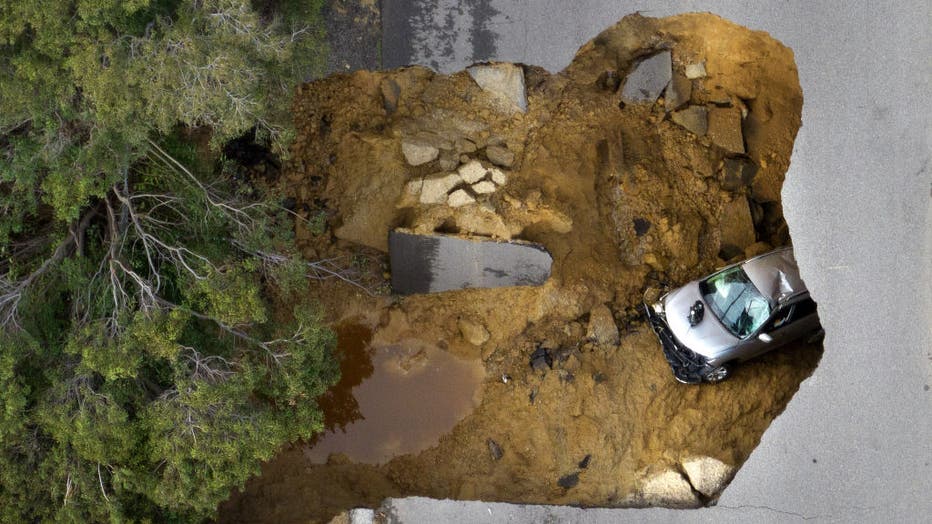 State Farm has a few tips to avoid pothole damage:

The word pothole was coined well before cars were invented. In the 15th and 16th centuries in England, potters would dig into the holes and gouges made by wagons and coaches for clay to make pots. Teamsters driving wagons called the holes potholes, according to the American Public Works Association.