The rules of a self-quarantine are quite strict.

WASHINGTON - Can any American who is sick get tested for the worrisome new coronavirus? That's been a complicated question, one that's left doctors, patients and some health experts frustrated and concerned.

U.S. health officials say more and more public and private laboratories are now able to test for the virus. But some experts have wondered why it's taken so long, and what that means to efforts to spot and stop the outbreak's spread.

Here's a look at the state of U.S. testing:

WHO CAN GET THE TEST?

Not everyone. For now, tests are limited to people with fever, cough and other flu-like symptoms. Priority goes to people who have had close contact with someone confirmed to have the virus or those who traveled to an outbreak area outside the U.S. But recently, doctors have been encouraged to request a test if a patient's symptoms just seem suspicious.

For weeks, doctors had to consult local or federal health officials for a decision on testing. But as commercial laboratories are beginning to come online, doctors are getting more leeway to make testing decisions.

Patients should get tested first for the seasonal flu and other common infections to rule those out, officials say.

HOW DOES THE TEST WORK?

The test uses samples taken from the patient with swabs. The Centers for Disease Control and Prevention recommends at least two swabs, one from the throat and the other from the nose. That's where the virus tends to enter and cause an infection. 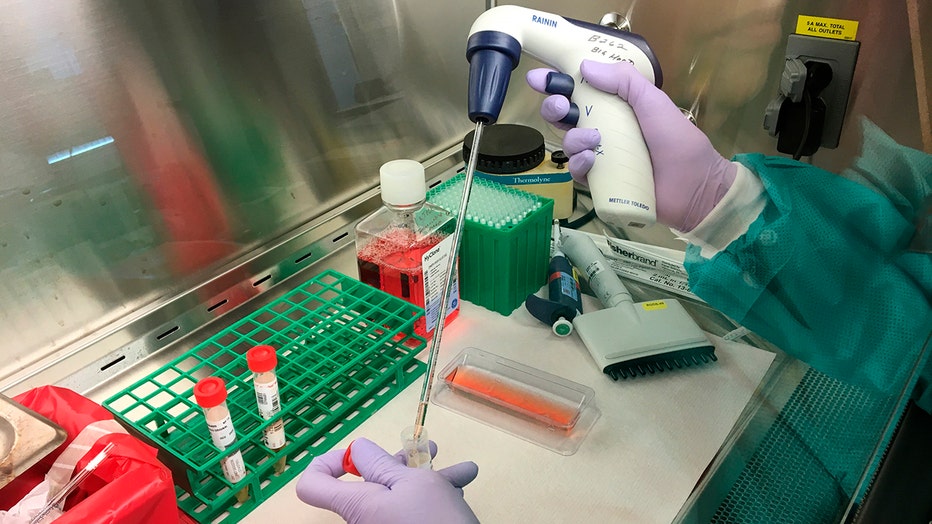 The samples are then sent off to a limited number of government, academic and private labs that can run the test.

The test uses a laboratory technique called polymerase chain reaction, or PCR, to find tiny traces of the virus' genetic material and, in just a few hours, make billions and billions of copies of it – enough that a computer can detect it.

The lab process can take roughly 4 to 6 hours. Altogether, it can take several days to ship a sample and receive the results back.

HOW MANY TESTS CAN BE DONE?

Federal officials have touted the shipment of more than 1 million tests to U.S. health labs. But the actual number of people who can be tested is much lower. One reason is that it takes multiple samples and tests to confirm a single result.

But testing capacity is also being squeezed by a number of other factors, including the limited number of labs and the time it takes to set up and run the tests.

Flaws in the CDC's original test also delayed the rollout to other labs. In early February, the CDC started sending out tests to state and local public health labs. But before they were put into use, some tests proved to be faulty and unreliable.

The labs have now gotten the tests going, with facilities in all 50 states capable of running about a total of 75,000 tests over the next days or weeks, the CDC's Dr. Nancy Messonnier said Monday.

The Food and Drug Administration granted private and academic labs permission to develop and use their own tests late last month. But Harvard University's Dr. Michael Mina says it can take labs days or weeks to fine-tune their testing methods, much like a restaurant trying out a new recipe.

National testing chains, including Quest Diagnostics and LabCorp, began offering tests Monday. That will result in a "dramatic increase in the availability of testing," Vice President Mike Pence said.

So far, the CDC has done tests for 1,700 people, but that doesn't include tests done by other government or private labs. More than 600 Americans have tested positive.

HOW ARE OTHER COUNTRIES HANDLING TESTING?

The first outbreak was identified in China, and in January, China shared genetic information that allowed labs in the U.S. and other countries to develop tests.

Germany used a dense network of independent labs to help speed testing of potential cases, and has the ability to run around 15,000 tests a day. South Korea reportedly can run roughly 15,000 tests a day, too, thanks to a quickly established collaboration between health officials and biotech companies there.

Experts note that looking for a virus, through testing, is an important way to know how much it's spreading. That means health officials in some other countries got more of a head start to prepare for spread of the virus, they say.

WHO IS PAYING FOR TESTING IN THE U.S?

Federal health plans like Medicare and Medicaid along with major private insurers say they will cover the cost of the lab test. Additionally, many insurers are waiving copayments, deductibles and other out-of-pocket costs to encourage people to seek help. But some patients may still face a bill if other tests or X-rays are done, or they seek care in an emergency room instead of a doctor's office.