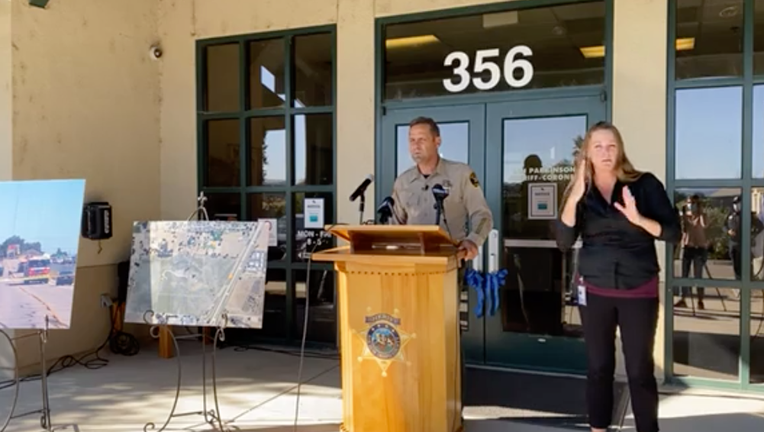 PASO ROBLES, Calif. - A man killed by sheriff’s deputies after he shot and wounded a deputy in a central California cemetery on Thursday has been identified as a convicted felon and white supremacist gang member, authorities said.

The man opened fire on deputies while hiding behind bushes after he ran from his car in Paso Robles, San Luis Obispo County’s Sheriff Ian Parkinson said at an afternoon news conference.

Shortly before 10:30 a.m., a deputy on patrol noticed the suspect’s vehicle parked on a downtown street in the city of about 30,000 residents in a wine region on California’s central coast.

The suspect was spotted walking nearby and when the deputy asked to speak with him, the man sprinted into Templeton Cemetery and hid behind thick shrubbery, Parkinson said.

Additional deputies arrived and when they approached, the suspect ambushed them, the sheriff said.

“The suspect shot multiple rounds at the deputy, striking one deputy in the lower leg. And the deputies returned fire,” Parkinson said.

By that time more deputies arrived and they “engaged in a gun battle where the suspect was struck and pronounced dead at the scene,” Parkinson said.

The deputy was in stable condition at a hospital, Parkinson said.

The suspect is a convicted felon with an outstanding felony warrant, a history of weapons charges and a member of a white supremacist gang, Parkinson said. A handgun was recovered at the scene.

The man’s name was not immediately released. “He was known by us, he was wanted by us and he was considered armed and dangerous,” Parkinson said.