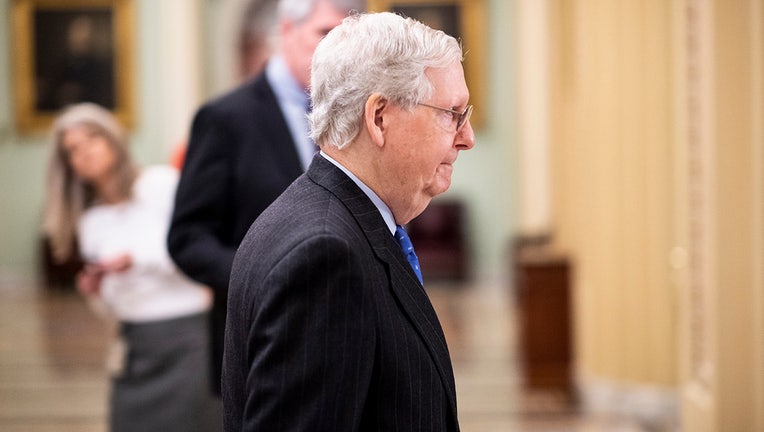 WASHINGTON (FOX NEWS) - The White House and Senate leaders reached a deal shortly after midnight Wednesday on a massive $2 trillion coronavirus relief package, capping off days of heated negotiations that had nearly been derailed by last-minute demands from House Democrats.

“Ladies and gentleman, we are done," White House legislative affairs director Eric Ueland announced as he left the office of Senate Majority Leader Mitch McConnell, R-Ky., near midnight. "We have a deal."

McConnell was set to announce the deal on the Senate floor early Wednesday morning.

The deal came hours after President Trump's top economic adviser said Congress was close to agreeing on an unprecedented $6 trillion stimulus plan. But, tensions abruptly ratcheted back up again on Capitol Hill Tuesday night -- with Republican Sens. Lindsey Graham and Steve Daines taking to the Senate floor and calling for an end to negotiations because, as Graham put it, Democrats were "nickel-and-diming at a time when people are dying -- literally dying."

Graham and Daines' late-night push for an immediate vote on a stimulus bill came after tensions seemingly had cooled in Congress during the day, sending the Dow Jones Industrial Average to its highest point gain in its history as leaders from both parties signaled that an agreement could be within reach.

Shares advanced in Asia on Wednesday after the Dow Jones Industrial Average surged to its best day since 1933 as Congress and the White House neared a deal. Japan's Nikkei 225 index jumped 5.3 percent, while Hong Kong added 3 percent and Sydney climbed 3.6 percent. Markets across Asia were all up more than 2 percent.

"In case you're watching," Graham said in reference to the president, his voice rising, "tell [Treasury Secretary] Steven Mnuchin to come back to the White House and end negotiations. I think I understand the give-and-take of life and politics, but I've been called by two good friends on the Democratic side in the last five or six hours wanting more money. End the negotiations."

He added: "This bill is $2 trillion. There's a ton of money in this bill for people who need it, but what we're doing now is, every special-interest group in town is trying to get a little bit more."

“Listen, we were told we are at the one-yard line last night to get this done," Daines, who led the colloquy with Graham, said from the Senate floor. "All I’ve got to say is, the Senate may think it’s at the one-yard line right now, but Montanans are getting sacked. In fact, our unemployment claims in Montana since march 17th, we just looked it up 15 minutes ago, 14,350 Montanans have filed for unemployment in the last week.”

Monday had been marked with furious debate on the Senate floor, as Republicans accused House Democrats of proposing an alternative stimulus bill that was full of unnecessary progressive wishlist items. Senate Democrats in the meantime repeatedly blocked the Republican stimulus bill, which would require 60 votes to survive.

"There is a whole concern in our country that if we're giving tens of billions of dollars to the airlines, that we could at least have a shared value about what happens to the environment," Pelosi said Tuesday.

Republicans, including the president, have called the measures irrelevant "nonsense" and total nonstarters. After Democrats signaled they might be willing to negotiate away some of their proposals, though, the Dow surged and lawmakers appeared optimistic.

Democrats have argued the GOP package would do too much for large corporations and not enough for workers, and inaccurately suggested that the treasury secretary would have unilateral control over a massive "slush fund."

Get updates on this story at FoxNews.com.