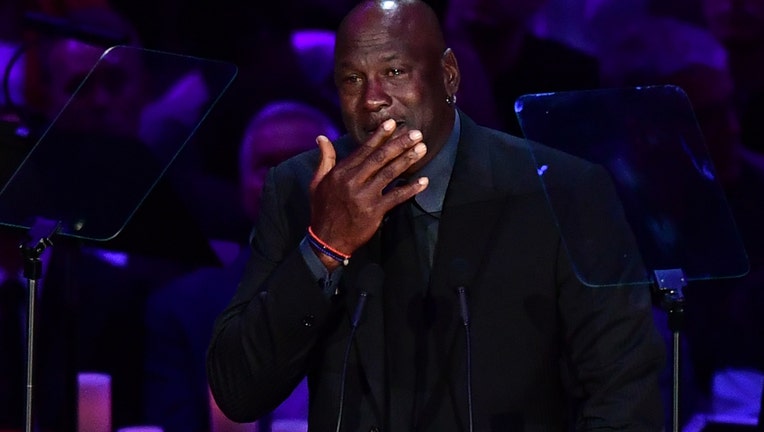 Retired US basketball player Michael Jordan cries as he speaks during the "Celebration of Life for Kobe and Gianna Bryant" service at Staples Center in Downtown Los Angeles on February 24, 2020. - Kobe Bryant, 41, and 13-year-old Gianna were among ni

LOS ANGELES - Basketball legend Michael Jordan took the stage during “Celebration of Life for Kobe and Gianna Bryant” with a tearful tribute to Kobe, thanking his widow Vanessa Bryant for the opportunity to speak, saying, “I’m grateful to honor Gigi and celebrate the gift that Kobe gave us all.”

“This kid had passion like you would never know," said Jordan, reflecting on the long and close relationship he had with the late Lakers champion.

RELATED: ‘This was one of his favorite songs’: Beyonce opens Kobe Memorial with emotional performance

Calling him a dear friend and “like a little brother,” Jordan shared memories with the thousands in attendance of how Bryant looked up to him, recalling Bryant’s love and commitment to the game of basketball.

Jordan joked that like little brothers, Kobe Bryant peppered him with questions about what to expect as his career with the Los Angeles Lakers started taking off. Jordan’s fond remembrances drew laughter from the crowd at the Staples Center.

The former Chicago Bulls superstar said he received calls from Bryant at all hours, eager to talk about the game, business and family.

Jordan said Bryant was eager to become the best basketball player, and it made him want to be the best big brother he could be.