Students in Florida staged walkouts on Thursday to protest what has been labeled by critics as the "Don’t Say Gay" bill that prohibits LGBTQ-related topics in kindergarten to third-grade curricula.

TALLAHASSEE, Fla. - A fiercely-debated, Republican-led education reform bill in Florida that would forbid instruction on sexual orientation and gender identity in kindergarten through third grade — among other reforms in public schools — is headed to the governor's desk.

Florida’s House Bill 1557, officially called the "Parental Rights in Education" bill, has received a wave of criticism from Democrats and LGBTQ advocates — who have often referred to it as the "Don’t Say Gay" bill. Statewide, the bill has sparked a swell of protests and student walkouts.

The measure passed 22-17 in the state Senate on Tuesday with all Democrats and two Republicans voting against it. The House voted 69-47 to pass the measure last month.

Here’s a look at what the Florida bill says and the surrounding debate:

The Florida House Bill 1557 specifies several reforms for Florida public school districts in relation to parents. This includes a requirement that schools must notify parents of changes to a student’s health or well-being and prohibits schools from encouraging students to withhold information from parents.

The measure also allows parents to access their child’s education and health records used by the district, lets parents refuse any school healthcare services offered by the school, and requires that districts get permission from parents before administering a health screening form or well-being questionnaire.

One part of the bill is particularly what sparked the "Don’t Say Gay" nickname. It states: "Classroom instruction by school personnel or third parties on sexual orientation or gender identity may not occur in kindergarten through grade 3, or in a manner that is not age-appropriate or developmentally appropriate for students in accordance with state standards."

The bill also forces schools to respond to parent concerns within seven days. Schools must either resolve those issues or "provide a statement of the reasons for not resolving" them within 30 days. If the district doesn’t, parents can escalate those concerns by suing or seeking a resolution through a special magistrate.

Republican Rep. Joe Harding, who sponsored the measure, last month described meeting a server at a restaurant who was visibly upset, who told him about how her fourth-grade daughter was being bullied at school.

"She told me about how she couldn't get a call back [from the school]. She couldn't understand why they weren't doing something. She didn't have time to keep chasing and chasing to get a meeting," Harding recalled on Feb. 24. "And so within one text message, I connected her with a principal directly. Not every parent is going to have the ability to have a politician build a bridge between the parent and the school district."

What supporters of House Bill 1557 say

Harding and other GOP lawmakers in Florida have argued that parents should be broaching subjects like sexual orientation and gender identity with their children, rather than educators. They say it would also not bar spontaneous discussions of sexual orientation and gender identity in schools but instead is intended to prevent districts from integrating the subjects into the official curriculum.

"I know how important it is to empower parents in this relationship. I want to encourage parents across Florida to own it," said Sen. Dennis Baxley, a Republican who carried the bill in the Senate. "They’re your kids, and it is tough — it’s tough to figure out what influences will be on them and what kinds of decisions they will make and how that all comes out."

In the bill’s early stages, Harding filed an amendment that would have effectively required a school to inform parents if a student came out as LGBTQ to a teacher, renewing condemnation of the measure. Harding withdrew the amendment as it picked up attention in media and online, according to the Associated Press.

"Nothing in the amendment was about outing a student. Rather than battle misinformation related to the amendment, I decided to focus on the primary bill that empowers parents to be engaged in their children’s lives," Harding later said in a statement.

Republican Gov. Ron DeSantis, who is currently running for reelection and is often considered a presidential contender, has chafed at calling the proposal the "Don’t Say Gay" bill because he said it would apply to instruction on any gender identity or sexual orientation. He said it was inappropriate for teachers to discuss those issues with children in kindergarten through third grade.

"We’re going to make sure that parents are able to send their kid to kindergarten without some of this stuff injected into their school curriculum," the governor said Monday.

If signed by DeSantis, the measure would go into effect in July, according to FOX 13 Tampa.

Critics have often said the bill’s language, particularly the phrases "classroom instruction" and "age-appropriate," could be interpreted broadly enough that discussion in any grade could trigger lawsuits from parents — and therefore could create a classroom atmosphere where teachers would avoid the subjects. 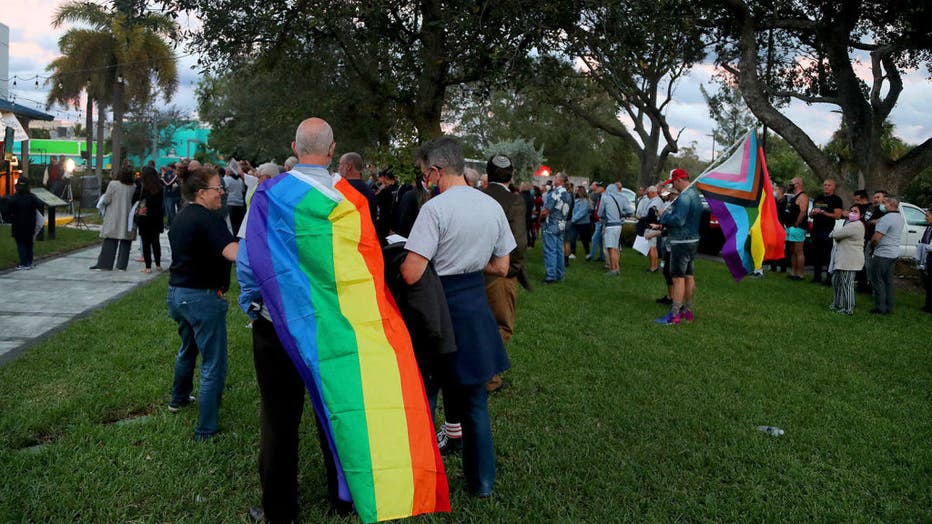 Supporters gather for a Safe Schools South Florida Friends rally to push back against the so-called "Don’t Say Gay" bill (HB 1557) at the Pride Center in Wilton Manors, Florida, on Feb. 2, 2022. (Mike Stocker/Sun Sentinel/Tribune News Service via Get

Opponents have also hammered part of the legislation that would allow parents to sue districts over violations. Democrat Sen. Loranne Ausley said the bill "opens the floodgate for vigilante justice."

"Parents who don’t like a teacher, don’t like a principal, don't like a school or something that their child came home with. They can register their concern with the school district. If not satisfied with the outcomes, they can keep going and file suit without fear of consequences if their claim is without merit or even outrageous," Ausley said.

On Tuesday, shortly after the measure passed the statehouse, U.S. Secretary of Education Miguel Cardona issued a statement that read "leaders in Florida are prioritizing hateful bills that hurt some of the students most in need."

"The Department of Education has made clear that all schools receiving federal funding must follow federal civil rights law, including Title IX’s protections against discrimination based on sexual orientation and gender identity," Cardona wrote. "We stand with our LGBTQ+ students in Florida and across the country, and urge Florida leaders to make sure all their students are protected and supported."