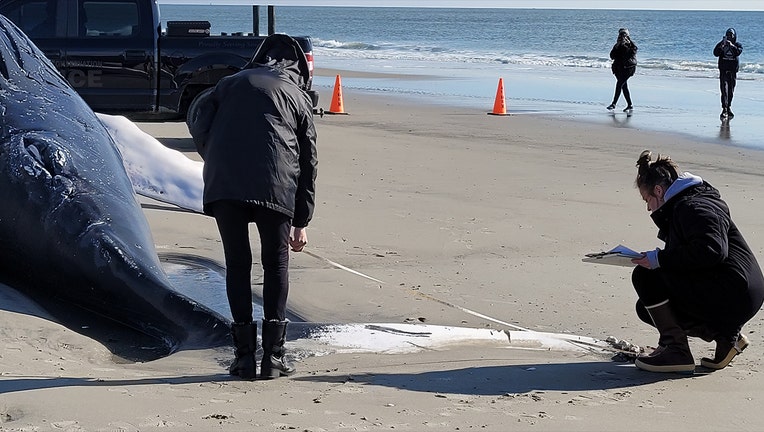 A dead whale sits on an Atlantic City beach.

ATLANTIC CITY, N.J. - As the stench of a dead whale hung in the air, environmentalists and opponents of offshore wind stood on a beach where the marine mammal lay buried Monday and called for a federal probe into a spate of whale deaths in New Jersey and New York.

Groups from the two states wrote President Joe Biden requesting a probe of the deaths of six whales that washed ashore over the last 33 days in areas being prepared for large-scale offshore wind farms. They also are asking for a halt to site work until the causes are determined.

RELATED: Dead whale washes up on beach in Queens

She said survey boats explore the ocean floor using focused pulses of low-frequency sound in the same frequency that whales hear and communicate, which could potentially harm or disorient the animals.

The news conference was held on the beach in Atlantic City atop the buried carcass of a whale that washed ashore over the weekend in front of the Boardwalk arena that used to house the Miss America competition. The stench from the decaying animal remained powerful, even through a heavy layer of sand.

A prominent marine mammal stranding expert said that while the cause of the deaths is unknown, it could be a simple function of a larger-than-normal number of whales in the area this winter, with the number of deaths rising proportionately.

And a federal agency, the National Oceanic and Atmospheric Administration, said that to date, no humpback whale — the species accounting for most of the recent whale deaths in New Jersey and New York — has been found to have been killed due to offshore wind activities.

New Jersey is striving to be the East Coast leader in the burgeoning offshore wind energy. The state has approved three offshore wind farms and is soliciting more during the first quarter of this year. Additional projects are planned off the New York coast.

Orsted, the Danish wind power developer that will build two of those three approved projects, said its current work off the New Jersey coast does not involve using sounds or other actions that could disturb whales.

"As the world’s most sustainable energy company, we prioritize coexistence with our communities and marine wildlife," said Maddy Urbish, the company's head of government affairs for New Jersey. "When offshore, we combine human surveillance and state-of-the-art technical equipment to avoid any impact on marine wildlife as we build projects to advance New Jersey’s clean energy ambitions.

The Marine Mammal Stranding Center, located just north of Atlantic City in Brigantine, responded to the city's two recent whale deaths. Sheila Dean, the center's director, said it is not yet known what caused the deaths, pending post-mortem tests. But she noted that many variables could be in play, including underwater sonar use by the military, the prevalence of plastic pollution in the ocean, and the ever-present danger of collisions with ships.

She also said there is a larger-than-normal number of whales in the region right now because their food sources are still in the area. That could simply mean that with a larger total population, a corresponding number of deaths could be taking place, she hypothesized.

About 40% showed evidence of having been struck by a ship or having become entangled in ropes, lines or fishing gear, she added.

At Monday's news conference, the groups said offshore wind developers have applied for authorization to harass, harm or even kill as many as 157,000 marine mammals off the two states.

Scientists are searching for answers about why humpback whales are dying at an unprecedented rate along the Atlantic Coast. Since the beginning of the year, five juvenile humpback whales have washed ashore in New York alone. Two in Breezy Point (in February and June), one in Long Beach, one in Reynolds Channel, and one on Fire Island. A sperm whale was also found in Gardiner's Bay.