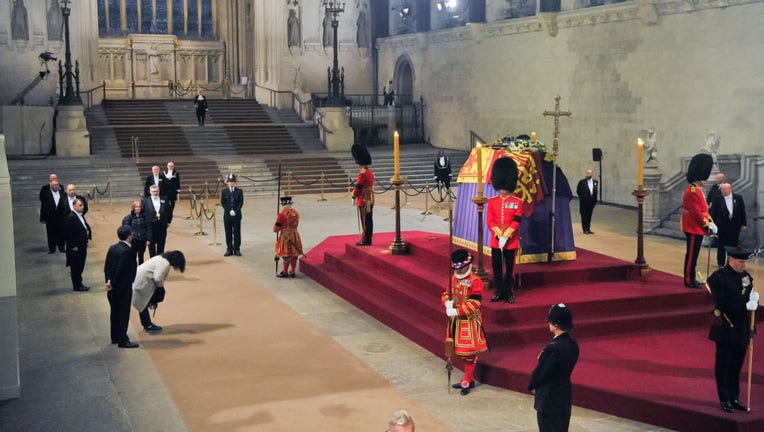 LONDON - The world is preparing to say its last goodbyes to Queen Elizabeth II as her state funeral is set for Monday.

Events surrounding Queen Elizabeth II's state funeral on Monday cap 10 days of national mourning and are expected to be watched by hundreds of thousands of people packed onto the streets of London and millions around the world.

Mourners have spent the last few days lining up for hours, sometimes in chilly weather, to view the queen’s coffin at Westminster Hall.

The numbers of mourners have grown steadily since the public was first admitted on Wednesday, with a queue that snakes around Southwark Park and stretches for at least 5 miles.

Overnight, volunteers distributed blankets and cups of tea to people in line as temperatures fell to 6 degrees Celsius (43 degrees Fahrenheit). Despite the weather, mourners described the warmth of a shared experience.

"It was cold overnight, but we had wonderful companions, met new friends. The camaraderie was wonderful,″ Chris Harman of London said. "It was worth it. I would do it again and again and again. I would walk to the end of the earth for my queen."

Honoring their patience, King Charles III and his eldest son Prince William made an unannounced visit Saturday to greet people waiting to file past Elizabeth’s coffin, shaking hands and thanking mourners in the queue near Lambeth Bridge.

How to watch the queen’s funeral?

Coverage will start at 3:30 a.m. ET on LiveNOW from FOX. You can watch live in the video player above, on your browser, or on your Tubi app on your smart TV or phone.

With the advent of streaming services in addition to regular broadcast television, experts say a staggering 4.1 billion viewers could tune in to the funeral, according to multiple news reports.

What is the schedule for the queen’s funeral?

After that, there will be a short 10-minute procession from Westminster Hall to Westminster Abbey. Doors will open at 8 a.m. for funeral attendees.

Her funeral at Westminster Abbey will begin at 11 a.m. British local time, or 6 a.m. ET. in the United States.

RELATED: Which places in the world care about the queen’s death the most, according to Google

According to Buckingham Palace officials, the service will be conducted by the Dean of Westminster. The sermon will be given by the Archbishop of Canterbury.

Prayers will be said by the Archbishop of York, the Cardinal Archbishop of Westminster, the Moderator of the General Assembly of the Church of Scotland, and the Free Churches Moderator.

The funeral is expected to last about an hour.

Two minutes of silence will be observed Monday across the United Kingdom at the end of the funeral service.

London’s Heathrow Airport announced it will halt all flights for 15 minutes before the two-minute national silence on Monday, until 15 minutes after it has finished "to avoid noise disruption."

Who is attending the queen’s funeral?

The guest list for the state funeral is a roll call of power and pomp, from Japan’s Emperor Naruhito and King Felipe VI of Spain to U.S. President Joe Biden, French President Emmanuel Macron and the prime ministers of Canada, Australia and New Zealand.

Biden remembered the words of comfort that the late monarch had provided to the United States following the Sept. 11 attacks more than two decades ago.

"Grief is the price we pay for love," said Biden, quoting part of the queen’s message to America during remarks on the 21st anniversary of the attacks.

Canadian Prime Minister Justin Trudeau — who first met the queen when he was a child and his father Pierre Trudeau was Canada’s leader — said the queen was "one of my favorite people in the world."

Nearly 6,000 Military personnel were deployed throughout the meticulously choreographed operation that began with the queen's death on Sept. 8 at her Balmoral Estate in the Scottish Highlands. That number comprises 4,416 from the army, 847 from the navy and 686 from the air force. In addition, around 175 armed forces personnel from Commonwealth nations have been involved.

What will happen after the queen’s funeral?

After the state funeral, attended by 2,000 guests, Elizabeth’s coffin will be carried through the historic heart of London, from Westminster Abbey to Wellington Arch near Buckingham Palace on a horse-drawn gun carriage with Charles and other royals walking behind.

From London, the queen’s coffin will then be driven in the state hearse to Windsor for a committal service at St. George’s Chapel near Windsor Castle, attended by 800 people, including members of the queen’s household and Windsor estate staff.

RELATED: Queen's funeral day will be a holiday for federal workers in Canada

More than 1,600 military personnel will be involved in the pomp-filled procession of the queen's coffin from Westminster Abbey to Wellington Arch after her funeral. A further 1,000 will line the streets along the procession route When the coffin reaches Windsor, 410 military personnel will take part in the procession, 480 will line the streets, 150 will be in a guard of honor and line steps and 130 more will fulfill other ceremonial duties.

At the end of the service, the coffin will be lowered into the Royal Vault and the sovereign’s piper will play a lament. The Archbishop of Canterbury, Justin Welby, will pronounce the blessing and the congregation will sing "God Save The King."

Members of the royal family will then hold a private burial service at the King George VI Memorial Chapel, where the queen will be interred with her late husband, Prince Philip, who died last year at 99.