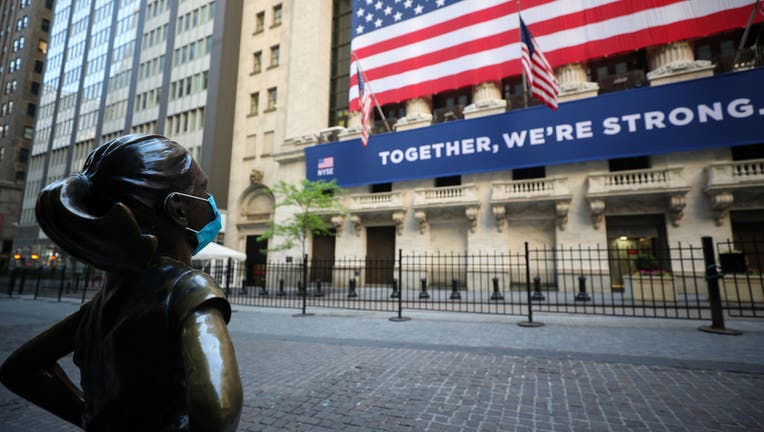 NEW YORK - The big U.S. banks have a message for many of their New York City workers: Don’t hold your breath about coming back to the office.

FOX Business has learned brokers at UBS are under the impression they won’t have to return to work until April 2021, while Morgan Stanley, Goldman Sachs and the nation’s largest bank JPMorgan, are alerting roughly half their workforces that they may not be coming back to their Manhattan offices until possibly well into next year.

Spokespeople from Morgan Stanley, JPMorgan and UBS declined to comment. A spokeswoman for Goldman said the company’s Manhattan headquarters is at 15% capacity now and does not expect to be at more than 50% this fall. The company does not have a date for all employees to return.

At Bank of America, a spokesman said the company will give employees 30 days notice of any official word about returning to the office sometime after Labor Day, and a Citigroup spokeswoman said a decision about bringing personnel back will be made around the same time frame.

The return to the city for people who hold jobs considered “nonessential” or work that isn’t necessary to do in the office have been put on indefinite hold, according to bank executives who spoke on the condition of anonymity.

These positions include people who work in public relations, human resources, and even financial advisors who deal with smaller investors -- jobs that can be done from home instead of traveling into Manhattan via train, bus or subway.

The Big Apple remains only partially open amid the COVID-19 pandemic as health officials still worry a second wave could hit the densely populated city in the fall. Restaurants remain closed for indoor dining.

As banks weigh final decisions, some executives are hearing from city personnel that they desperately want to return to the office.

While many employees are able to make the drastic lifestyle-work change, it has become an emotional burden for many others to work from home all the time.

“We want to get as many people back as soon as possible,” one senior bank executive tells FOX Business. “Or we may see a lot of employees getting divorced.”

Nearly half a million people work in the New York financial services industry, and  nearly all the nation’s big banks have headquarters in Manhattan, according to the New York State Comptroller's office.

Keeping workers away from the city could reduce the spread of coronavirus, but it could also mean an even deeper economic recession as the city grapples with the virus-induced recession and high unemployment, particularly in the service industry of food and hospitality that catered to financial industry employees.

Top executives at the big banks said, even in the best-case scenario, they’ll have roughly 50% of workers back in their Manhattan offices by the end of the year. These jobs are considered essential by the banks and include positions such as trading, which relies on sophisticated software, and computer programmers, which keeps the "plumbing" of the big banks working.

These workers are already filtering into Manhattan offices of the big banks, albeit in small numbers. Even that presents a difficulty because they still need to finalize plans to comply with new health orders that mandate social distancing, masks and other measures such as limiting the number of people in elevators and sanitizing office space frequently.

“I don’t see any downside to banks keeping people home. There’s no evidence it will harm the companies,” said Dick Bove, a senior research analyst at Odeon Capital Group LLC.

Bove believes that eventually more financial industry people will be working from home permanently and the big banks will use the move to downsize office space and save on expensive Manhattan real estate.

“It’s a cost-saving measure," Bove said. "The ultimate result of keeping people home is they can get rid of real estate."