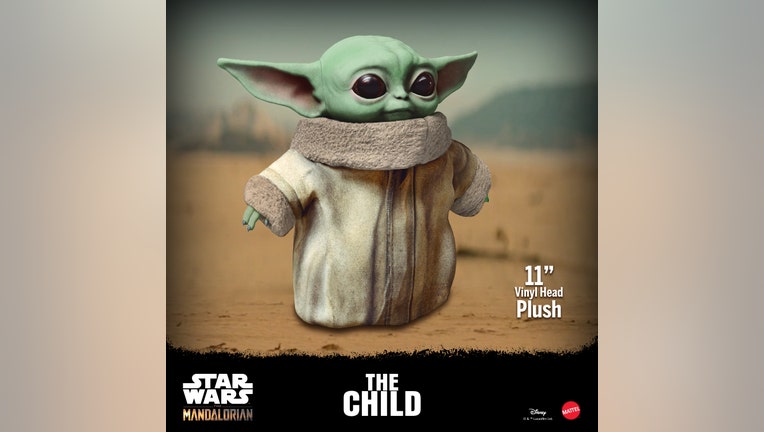 Plush toy of Baby Yoda made by Mattel.

NEW YORK (AP) — From Baby Yoda to eco-friendly stacking rings, toymakers displayed an array of goods last week that they hope will be on kids' wish lists for the holiday 2020 season.

The four-day Toy Fair, which ended last Tuesday, comes as the U.S. toy industry has been whipsawed by a number of obstacles. The liquidation of Toys R Us in 2018 has hurt impulse buying of toys. Then the escalating trade war between the U.S. and China has added costs to manufacturers' supply network. And now, a spreading new virus is threatening to delay product launches and may result in some shortages of seasonal toys starting in May.

Such challenges are on top of the pressures that toymakers face to create playthings that will excite kids who increasingly favor smartphones and other electronics.

Toy companies are hoping for a better year. U.S. toy sales fell 4% to approximately $20.9 billion in 2019 from the year before, according to NPD Group Inc., a market research firm. That followed a 1% drop from the previous year.

Many toymakers are counting on a slew of little Baby Yodas — the breakout character of the Disney+ streaming series “The Mandalorian." Hasbro Inc., Lego Group Inc., Mattel Inc. and Funko are among the toy companies highlighting various versions of the doll, from plush to animatronic.

Here's a primer for parents on toy shopping:

HOW WILL COVID-19 IMPACT TOY SHOPPING: The new virus has caused factories in China to remain mostly idle and shut down design and development offices. Just about 30% of the workers needed are at the toy factories in China, according to Steve Pasierb, CEO of the trade group Toy Association. And many companies, from Basic Fun to MGA Entertainment, the maker of the popular L.O.L. dolls, warn there could be fewer seasonal toys on shelves starting in May.

Zuru Toys Inc., the maker of the hit toy Mini Brands, said it's been forced to postpone the fall launch of a key plush toy. Get ready for delayed launches from other toymakers, analysts say.

China represented 84% of U.S. toy imports in 2019, says Panjiva, a global trade research company. And many executives say there aren't many alternatives outside of China that can offer the same kind of expertise.

"This is the crisis of the day for toymakers,'' said Marc Rosenberg, an independent toy consultant. He believes that Hasbro will fare better than others since it has been moving beyond toys into entertainment with its purchase last year of Entertainment One Ltd., a British entertainment company that produces “Peppa Pig,” and other animated shows for preschoolers.

''There are going to be plenty of toys," Silver said. "Some things will be sold out, and a child may not get one of the hottest toys he or she wants, but they can pivot to something else.''

GREEN TOYS: Up until now, parents had limited options when it came to buying eco-friendly toys. But now major companies including MGA, Mattel, and Hasbro are jumping into the green trend, following smaller toy rivals that specialize in eco-friendly toys like Green Toys and Wish Bone Inc.

Mattel's Fisher-Price's Rock-a-Stack is made from sugarcane-based plastics and packed in 100% recycled material. It's part of the company's goal to have 100% recycled, recyclable or bio-based materials in both its products and packaging by 2030.

Privately-held MGA Entertainment unveiled a biodegradable ball as part of its L.O.L Surprise! Doll line. MGA also unveiled a new product line from Little Tikes which is made from a blend of recycled resins. Founder and CEO Isaac Larian said that the resin compound has been in development for two years, and he hopes to patent it and share the technology with other toymakers.

Both Mattel and MGA said the green toys will cost similar to previous, non-green versions. For example, Fisher-Price's Rock-a-Stack will retail for $6.99.

SURPRISE TOYS FOR BOYS?: When the L.O.L. Surprise! doll was launched in 2016, it became one of the industry's biggest hits for girls and has so far amassed several billions of dollars in sales. The toy is a glittery, half-sphere container that includes plastic charms and L.O.L. Surprise! dolls that are revealed when kids peel off layers of packages. It spurred a big industry trend where girls unwrap an item to find all sorts of surprises. Zuru's Tiny Brands, which is a package of surprise realistic miniatures of iconic brands like Dove, Skippy and Airheads, proved to be a holiday 2019 hit.

Now toy companies are trying to come up with a collectibles hit for boys who haven't flocked to anything similar since Pokemon trading cards in the mid-1990s, says Rosenberg.

One company, Super Impulse, is trying with Wacky Packages Minis, inspired by Topps baseball stickers. They're humorous fake product packages like Dr. Pooper and Weaklies that come in a box of five that are revealed only when opened.