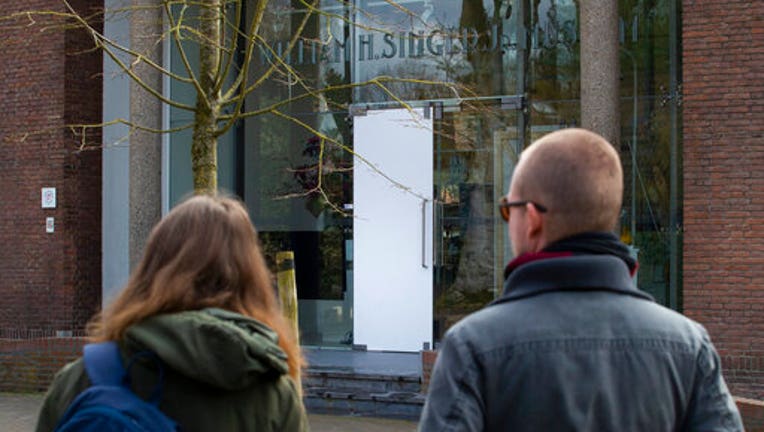 Two people look at the glass door which was smashed during a break-in at the Singer Museum in Laren, Netherlands, Monday March 30, 2020. (AP Photo/Peter Dejong)

THE HAGUE, Netherlands (AP) — A Dutch museum says that a painting by Vincent van Gogh was stolen in a raid overnight.

The Singer Laren museum east of Amsterdam says “Spring Garden” by the Dutch master was stolen in the early hours of Monday.

THIS IS A BREAKING NEWS UPDATE. AP’s earlier story follows below.

Police are investigating a break-in at a Dutch art museum that is currently closed because of restrictions aimed at slowing the spread of the coronavirus, the museum and police said Monday.

It wasn't immediately clear whether any paintings or other artworks were stolen in the heist in the early hours of Monday morning at the Singer Laren museum east of Amsterdam.

The museum did not release any details. It scheduled a news conference for Monday afternoon.

Before the closure, the museum was hosting an exhibition titled “Mirror of the Soul" with works by artists ranging from Toorop to Mondrian, in cooperation with Amsterdam’s Rijksmuseum.

The museum houses the collection of American couple William and Anna Singer, with a focus on modernism such as neo-impressionism, pointillism, expressionism and cubism.