KREMENCHUK, Ukraine - The Ukrainian government released a video of a missile hitting a mall on Monday.

"As of the evening of June 28, the total number of Russian missiles that have hit Ukrainian cities are estimated at 2,811," the Defense of Ukraine posted on Twitter.

President Volodymyr Zelenskyy called the attack an "unimaginable" number of victims in "one of the most daring terrorist attacks in European history."

Zelenskky said that many of the more than 1,000 afternoon shoppers and staff inside the mall managed to escape. Giant plumes of black smoke, dust and orange flames emanated from the wreckage, with emergency crews rushing in to search broken metal and concrete for victims and put out fires. Onlookers watched in distress at the sight of how an everyday activity such as shopping could turn into a horror.

The casualty figures were changing as rescuers searched the smoldering rubble into early Tuesday. Ukraine’s emergency services reported late Monday that at least 16 people were dead and about 60 wounded. 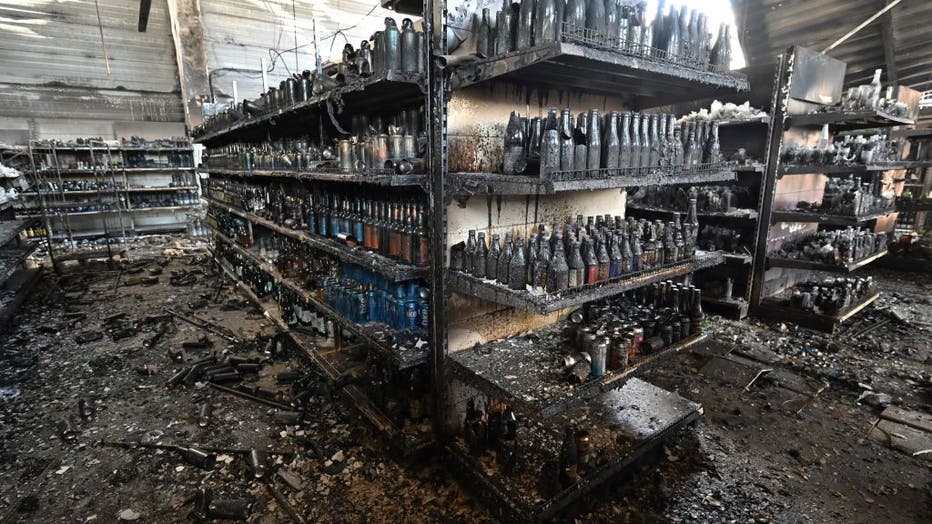 Soldiers worked into the night to lug sheets of twisted metal and broken concrete, as one drilled into what remained of the shopping center’s roof. Drones whirred above, clouds of dark smoke still emanating from the ruins several hours after the fire had been put out.

"We are working to dismantle the construction so that it is possible to get machinery in there since the metal elements are very heavy and big, and disassembling them by hand is impossible," said Volodymyr Hychkan, an emergency services official.

At Ukraine’s request, the U.N. Security Council scheduled an emergency meeting in New York on Tuesday to discuss the attack.

In the first Russian government comment on the missile strike, the country’s first deputy permanent representative to the United Nations, Dmitry Polyansky, alleged multiple inconsistencies that he didn’t specify, claiming on Twitter that the incident was a provocation by Ukraine. Russia has repeatedly denied it targets civilian infrastructure, even though Russian attacks have hit other shopping malls, theaters, hospitals, kindergartens and apartment buildings.

The missile strike unfolded as Western leaders pledged continued support for Ukraine, and the world’s major economies prepared new sanctions against Russia, including a price cap on oil and higher tariffs on goods. Meanwhile, the U.S. appeared ready to respond to Zelenskyy’s call for more air defense systems, and NATO planned to increase the size of its rapid-reaction forces nearly eightfold — to 300,000 troops.

Zelenskyy said the mall presented "no threat to the Russian army" and had "no strategic value." He accused Russia of sabotaging "people’s attempts to live a normal life, which make the occupiers so angry."

In his nightly address, he said it appeared Russian forces had intentionally targeted the shopping center and added, "Today’s Russian strike at a shopping mall in Kremenchuk is one of the most daring terrorist attacks in European history." He said Russia "has become the largest terrorist organization in the world." 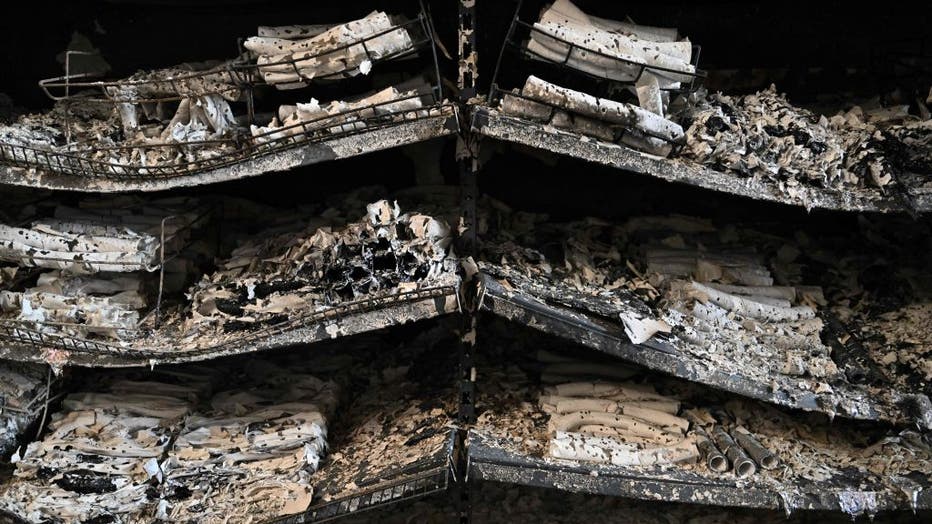 Russia has increasingly used long-range bombers in the war. Ukrainian officials said Russian Tu-22M3 long-range bombers flying over Russia’s western Kursk region fired the missile that hit the shopping center, as well as another that hit a sports arena in Kremenchuk.

The Russian strike echoed attacks earlier in the war that caused large numbers of civilian casualties — such as one in March on a Mariupol theater where many civilians had holed up, killing an estimated 600, and another in April on a train station in eastern Kramatorsk that left at least 59 people dead.

"Russia continues to take out its impotence on ordinary civilians. It is useless to hope for decency and humanity on its part," Zelenskyy said.

Kremenchuk Mayor Vitaliy Maletskiy wrote on Facebook that the attack "hit a very crowded area, which is 100% certain not to have any links to the armed forces."

The United Nations called the strike "deplorable," stressing that civilian infrastructure "should never ever be targeted," U.N. spokesman Stephane Dujarric said. Group of Seven leaders issued a statement late Monday condemning the attack and saying that "indiscriminate attacks on innocent civilians constitute a war crime. Russian President Putin and those responsible will be held to account."

The attack coincided with Russia’s all-out assault on the last Ukrainian stronghold in eastern Ukraine’s Luhansk province, "pouring fire" on the city of Lysychansk from the ground and air, according to the local governor. At least eight people were killed and more than 20 wounded in Lysychansk when Russian rockets hit an area where a crowd gathered to obtain water from a tank, Luhansk Gov. Serhiy Haidai said. 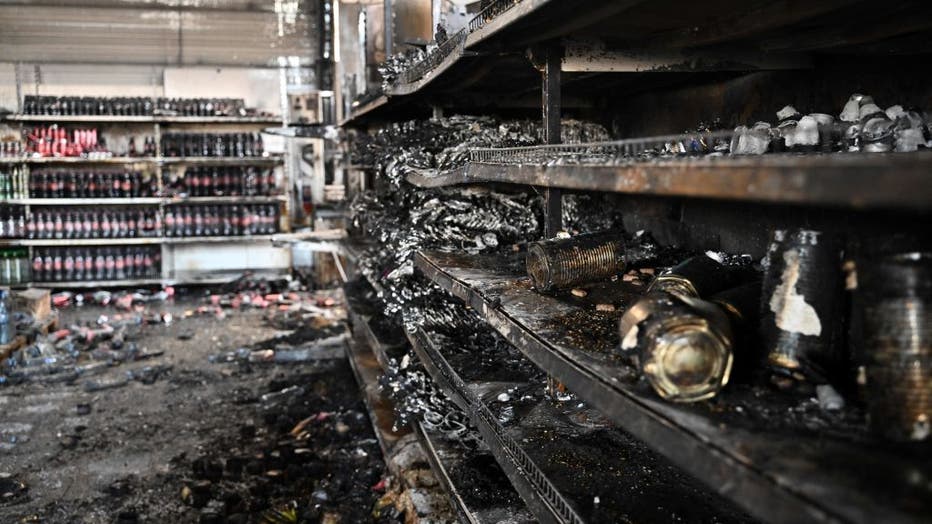 The eastern barrage was part of Russian forces’ intensified offensive aimed at wresting the eastern Donbas region from Ukraine. Over the weekend, the Russian military and their local separatist allies forced Ukrainian government troops out of Lysychansk’s neighboring city, Sievierodonetsk.

To the west of Lysychansk on Monday, the mayor of the city of Sloviansk — potentially the next major battleground — said Russian forces fired cluster munitions, including one that hit a residential neighborhood. Authorities said the number of victims had yet to be confirmed. The Associated Press saw one fatality: A man’s body lay hunched over a car door frame, his blood pooling onto the ground from chest and head wounds. The blast blew out most windows in the surrounding apartment blocks and the cars parked below, littering the ground with broken glass.

"Everything is now destroyed," said resident Valentina Vitkovska, in tears as she spoke about the blast. "We are the only people left living in this part of the building. There is no power. I can’t even call to tell others what had happened to us."

Before Monday’s attacks, at least six civilians were killed and 31 others wounded as part of intense Russian shelling against various Ukrainian cities over the past 24 hours — including Kyiv and major cities in the country’s south and east, according to Zelenskyy’s office. Shelling on Monday in Kharkiv, Ukraine’s second-largest city, killed at least five people and wounded 15.

One non-profit organization is providing urgent medical supplies and prosthetics to Ukrainian refugees and war victims. LiveNOW from FOX talks with Courage Ukraine about the life-changing work they are doing.

In Lysychansk, at least five high-rise buildings and the last road bridge were damaged over the past day, Haidai said. A crucial highway linking the city to government-held territory to the south was rendered impassable. The city’s prewar population of around 100,000 has dwindled to fewer than 10,000.

Analysts say that Lysychansk’s location high on the banks of the Siverskiy Donets River gives a major advantage to Ukrainian defenders.

"It’s a very hard nut to crack. The Russians could spend many months and much effort storming Lysychansk," said military analyst Oleh Zhdanov.