A tower of Masai giraffes caught a case of the zoomies at a zoo in Cincinnati, Ohio, on World Giraffe Day, June 21.

CINCINNATI - Video captured adorable footage of some giraffes at the Cincinnati Zoo catching a case of the "zoomies."

World Giraffe Day was June 21 and to celebrate, the Cincinnati Zoo in Ohio showed their giraffes, Cece, Zoey, Theo and Fenn galloping throughout their enclosure while the eldest giraffe, Tessa, ate peacefully.

"Today we celebrate the longest-necked animal in the world, on the longest day of the year," the zoo wrote in a statement. 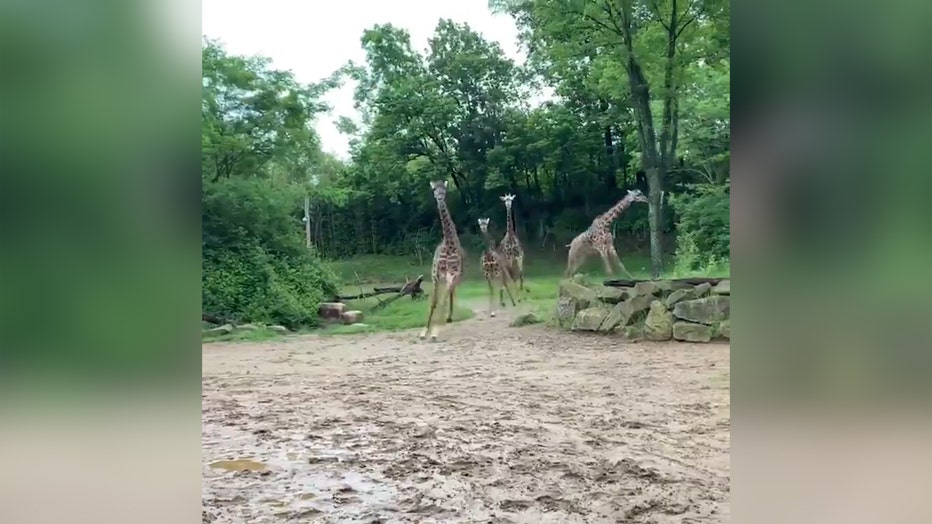 Freeze frame of video showing giraffes catching a case of the "zoomies."

The zoo houses Masai giraffes which are also known as the Kilimanjaro giraffe, according to the zoo’s website.

Masai giraffes are an endangered species and only 45,400 of them remain in the wild today, according to the Giraffe Conservation Foundation.

"The giraffe is one of the most charismatic and popular animals on Earth. Surprisingly, we actually know very little about their natural history and ecology in the wild. We do, however, know that over the past 30 years, wild giraffe populations have plummeted by 40% due to habitat loss and hunting," according to the Cincinnati Zoo.