Puffin uses a stick as a tool

Researchers have released videos of puffins they studied in Iceland. One video shows a puffin scratching its chest with a stick. (Credit: Annette Fayet, Erpur Snær Hansen, Dora Biro via Storyful)

GRIMSEY ISLAND, Iceland - A video showing a puffin picking up a stick to scratch its chest may be the first evidence of tool use by a seabird, researchers observing puffins in Iceland said.

Similar behavior has been observed in captive parrots, which scratch themselves with sticks. In wild birds, the only previous known use of tools for physical maintenance was the practice of "anting," where birds deposit ants in plumage to kill insects or bacteria.

The puffins' use of a stick to scratch with represented not just a new use of a tool for physical maintenance but new evidence of true tool use in an "avian order previously thought to lack the ability," according to the researchers, who are based at Oxford University and the South Iceland Nature Research Centre.

The video footage was taken in July 2018 by motion-activated cameras placed near puffins' nests on Grimsey Island, Iceland. The first clip shows the puffin scratching itself with the stick. The other clips show puffins carrying soft material to line their nests, which is not considered tool use by academics.

A similar instance of the tool use was observed in a puffin using a stick to scratch its back on Skomer Island in Wales. That the two instances spanned a distance of more than 1,700 km suggested, researchers said, "that occasional tool use may be widespread in this group." 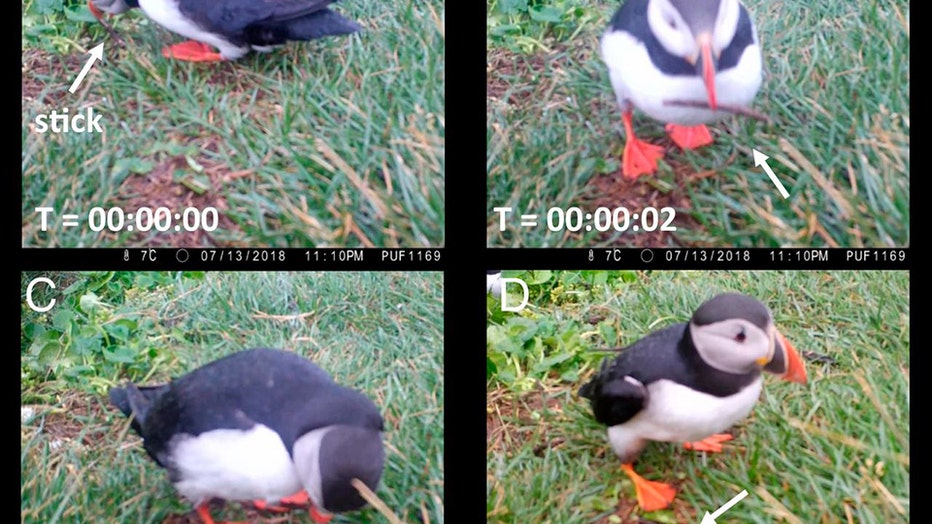 Screenshots of a puffin scratching with a stick. A. Puffin picking up the stick. B. Puffin holding the stick. C. Puffin scratching its chest with the stick. D. Nine hours later, the stick is still visible on the ground. (The arrows indicate the locat (Courtesy of Annette Fayet, Erpur Snær Hansen, Dora Biro)