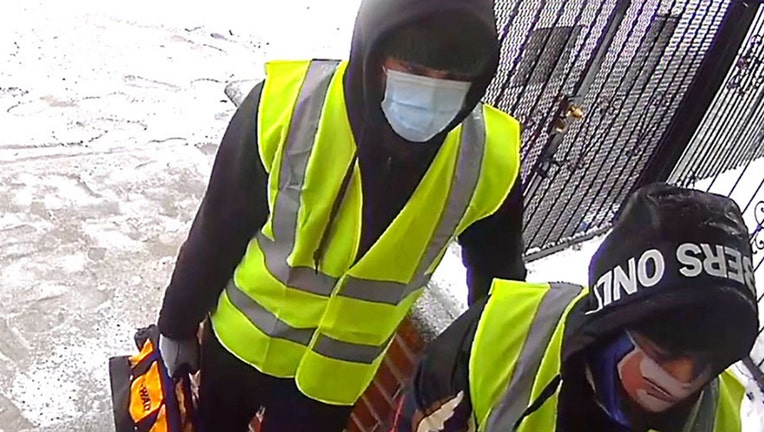 Two men posing as plumbers were behind a horrifying hours-long home invasion where the victims were tied-up and one was burned with an iron, said police. (NYPD)

NEW YORK - Two men posing as plumbers were behind a horrifying, hours-long home invasion in the Bronx where the victims were tied up and one was burned with an iron, according to police.

The men knocked on the door of an apartment on East 227 Street and Barnes Avenue in the Williamsbridge section at about 3 p.m. on Feb. 22 and said they were there to fix the plumbing. When they entered the apartment, they pulled out a gun, tied up a 28-year-old man and a 35-year-old man, and demanded money.

The victims were assaulted throughout the night and at one point one of the suspects used a hot clothing iron on the 28-year-old man's back causing burns, according to cops.

At about 6:41 a.m. the following day,  after the suspects had fallen asleep, the burned victim was able to set himself free and report the incident to police.

Cops arrived at the apartment and the other victim and the suspects had disappeared.

The man with burns to his back was treated at Montefiore Medical Center. A phone and $2,000 cash were reported stolen.

Anyone with information regarding this incident is asked to call the NYPD's Crime Stoppers Hotline at 1-800-577-TIPS (8477).

The public can also submit their tips by logging onto the CrimeStoppers website at WWW.NYPDCRIMESTOPPERS.COM, on Twitter @NYPDTips.