BURLINGTON, Vt. - In-person learning has been a challenge for many schools since the COVID-19 pandemic ushered in virtual learning last year.

But it has been especially challenging for Burlington High School in Vermont. Last August, toxic chemicals found in the school and in the very soil forced it to shut its doors indefinitely.

Even so, students began attending classes in their new home last month: an old Macy’s department store that had been closed since 2018.

"Downtown Burlington High School" welcomed students for the first time on March 4. Administrators greeted the masked children with a temperature check at the front door.

The state funded a $3.5-million renovation that turned the retail center into a learning center — though some Macy’s remnants remain intact.

The escalators that once ushered customers between floors now haul students to the upper and lower levels. White tiles and bright red carpet still cover the floors.

And the parts of the school still hold signs for brands like Michael Kors, Calvin Klein and Levi’s. 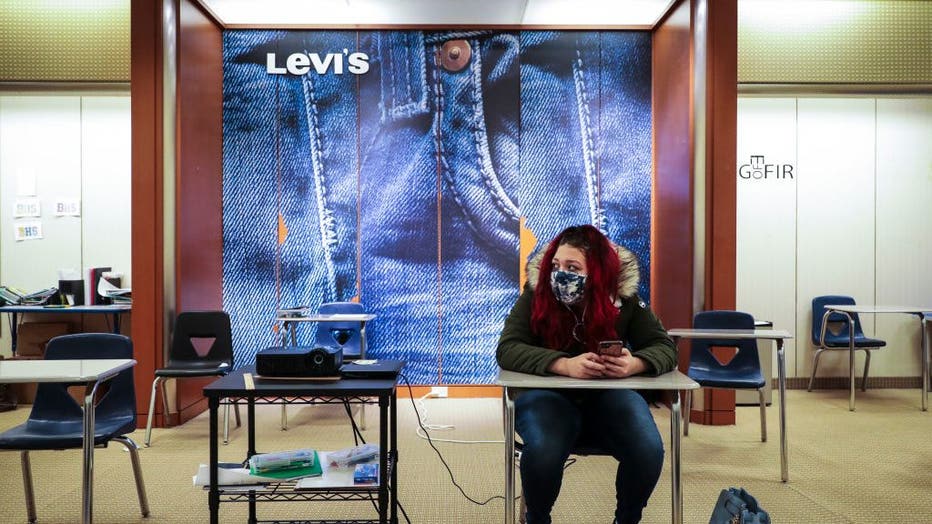 "Downtown BHS" opened its doors to students on March 4, with the campus having been transformed from an old Macy's department store into a school. (Photo by Erin Clark/The Boston Globe via Getty Images)

Due to the pandemic and spacing issues caused by smaller classrooms, the makeshift school only allows about half of its 1,000 students to attend at a time.

Students told the Associated Press there’s a bit of a noise problem. Renovators installed partial walls that don’t reach the ceiling, allowing sound to easily carry from one room to another.

"I have to say even though everyone complains that it’s loud and crowded, I just am so much happier being around people. It’s way better than being stuck at home on your computer all day long," 18-year-old Lila Iyengar Lehman said. "And although the situation’s weird, I think, you know, everyone’s doing the best with the circumstances so I think it’s pretty great overall."

The district has rented the building for the next 3.5 years while it investigates the toxins at the high school.