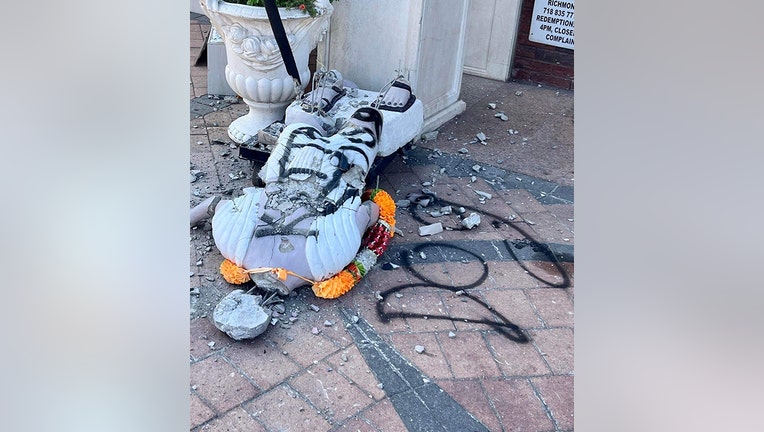 NEW YORK - The NYPD is hunting for six men they say destroyed a statue of famed Indian leader Mahatma Gandhi outside a Hindu temple in Queens on Tuesday morning.

Authorities say the incident happened at around 1:30 a.m. when the suspects took a sledgehammer to the statue which stood outside the Shri Tulsi Mandir in South Richmond Hill.

After smashing the statue, police say the suspects then ran away toward Liberty Avenue and got into two vehicles, a white Mercedes Benz and a dark-colored car, possibly a Toyota Camry with possible taxi/livery stickers on the back passenger window.

According to the New York Post, the suspects also spray-painted "kutta," meaning dog in Hindi, "Grandpi" and "Dog" on the road outside the temple.

This is reportedly the second time the statue has been damaged in just two weeks.

"The Gandhi statue at Tulsi Mandir was vandalized a second time, this time completely destroyed," New York State Assemblymember Jenifer Rajkumar, who represents the area, said in a tweet. "With the outpouring of support I’ve received from ppl all around Queens, the country & world, I’m more optimistic than ever that we will succeed in defeating these forces of hate."

The Hindu American Foundation claimed that the vandals were members of an Indian separatist movement that aims to create a theocratic state for Sikhs.