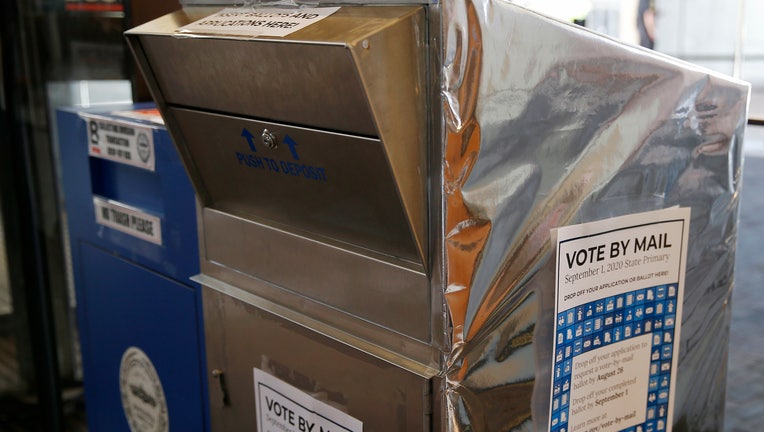 FILE - A ballot box inside Boston City Hall is available for residents to drop off their mail in ballots on Aug. 18, 2020. (Photo by Jessica Rinaldi/The Boston Globe via Getty Images)

The website’s August 21 launch comes as states across the country are looking to expand their mail-in voting options for the upcoming election amid the coronavirus pandemic. It also coincides with growing concern that the USPS will not be able to handle the anticipated surge in mail-in ballots.

Last week, the Postal Service warned states across the country that it cannot guarantee all ballots cast by mail for the November election will arrive in time to be counted, even if the ballots are mailed by state deadlines.

The USPS said in a news release on Friday that its new website will “serve both voting customers seeking information on how to use the mail to vote and election officials seeking resources to help make their administration of the upcoming elections a success.”

The USPS announcement of the website’s launch was followed shortly after Postmaster General Louis DeJoy’s congressional testimony in which he testified that he was unaware of recent mail operation changes until they sparked a public uproar.

DeJoy added that he and the agency are working to restore mailboxes and high-speed sorting machines that have reportedly been removed.

His testimony and the creation of the new mail-in ballot resource website add to an ongoing discussion about how the Postal Service will ensure timely delivery of ballots for the November election.

DeJoy told senators that election mail would be prioritized for delivery as in years past, but he said that blue curbside collection boxes and sorting equipment that have been removed are “not needed.”

The postmaster general distanced himself from President Donald Trump's complaints about mail-in ballots that are expected to surge in the coronavirus pandemic, but he told senators he could not yet provide a detailed plan about how he will ensure on-time election mail delivery.

DeJoy declared that the Postal Service, “is fully capable and committed to delivering the nation’s election mail securely and on-time.”

He added that it was a “sacred duty” and his "No. 1 priority between now and Election Day.”

“I think the American people should be able to vote by mail,” DeJoy testified.