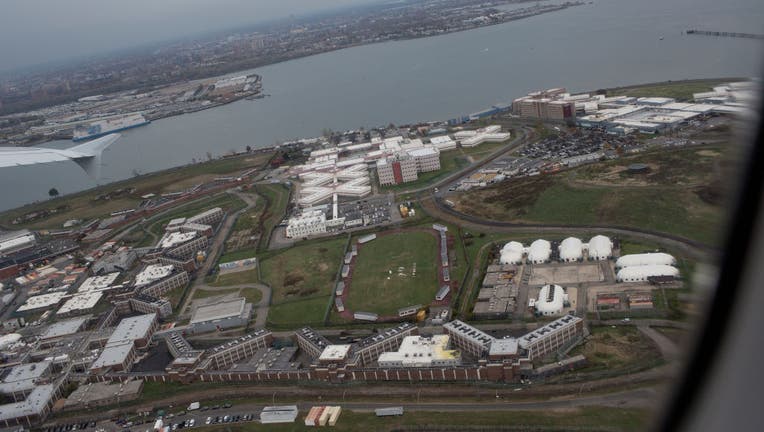 FILE- A view of several of the jails on Rikers Island as seen from a departing domestic flight leaving nearby Laguardia Airport on Nov. 7, 2019 in Queens, New York. (Photo by Andrew Lichtenstein/Corbis via Getty Images)

PHILADELPHIA - The nation’s jails and prisons are on high alert, stepping up inmate screenings, sanitizing jail cells and urging lawyers to scale back in-person visits to prevent the new coronavirus from spreading through their vast inmate populations.

There have been no reports of COVID-19 inside U.S. jails or prisons. But more people are incarcerated per capita here than in any other country in the world and prisons have become hot spots in other nations touched by the outbreak.

Coronavirus suddenly exploded in China’s prisons last week, with reports of more than 500 cases spreading across five facilities in three provinces. Earlier this week in Iran, 54,000 inmates were temporarily released back into the country amid virus fears.

Jail operators in the U.S. are coming to the growing realization that it’s only a matter of time before it strikes here.

“Jails are, you know, just prime opportunities for something like this to spread,” said Bossier Parish Sheriff Julian Whittington, the president of the Louisiana Sheriff’s Association. “I’m a realist and I suspect more than likely sometime it’s going to pop up in somebody’s jail.”

Health officials have been warning for more than a decade about the dangers of outbreaks in jails and prisons, which are ideal environments for virus outbreaks: Inmates share small cells with total strangers, use toilets just a few feet from their beds, and are herded into day rooms where they spend hours at a time together.

Practicing even the most simple hygiene, such as washing hands, is not a given in such environments. Hand sanitizer is often treated as contraband because it contains alcohol.

Inmates go in groups to court, where they wait together in cramped holding areas. Many are poor, meaning that when they're released they often must get on public buses or trains to get home.

Reports of illness spreading in a jail are fairly common, and occasionally outbreaks of influenza have required quarantine. Most often, the numbers of inmates who come down with the flu at the same time don’t climb higher than a couple of dozen, but there have been exceptions. In 2013, an outbreak of the stomach flu at Cook County Jail in Chicago, the largest single site jail in the U.S., prompted the quarantine of 700 inmates.

“We are used to dealing with this kind of thing like flu outbreaks that a lot of places aren’t," said Brad Curry, the chief of staff for the Cook County Sheriff’s Office, which operates the jail.

After the swine flu outbreak in 2009, which infected hundreds of prisoners across the country, most prison systems did create pandemic preparation plans.

Before worries of the coronavirus, the Philadelphia Prisons Department had a medical quarantine for inmates coming into its system, which houses about 4,600 inmates. New detainees go through a medical screening and are segregated for at least 10 to 14 days while they wait for the results of any medical tests, said James Garrow, a spokesman for the Philadelphia Department of Public Health.

The screening has since been updated to include COVID-19, not only in Philadelphia, but also in Dallas, Houston, Miami, Chicago and other cities. No prisons have yet obtained the medical kits to test for the virus, however.

The Federal Bureau of Prisons has instituted a new screening tool that includes question about whether inmates or staff members have traveled through any risk countries, had close contact with anyone diagnosed with COVID-19 or been deployed to areas with the virus within two weeks. The tool, obtained by The Associated Press, also looks to assess possible symptoms, including fever, cough and shortness of breath.

But only about 175,000 of the nation's more than 2 million incarcerated people are detained in federally run facilities. The rest are held in hundreds of prisons, jails and immigration detention centers around the country.

Local city and county correctional facilities bear the brunt of screening incoming prisoners because those facilities are often the first stop while someone awaits court hearings or arraignments on local, state or federal charges.

Local corrections officials realize they're on the front lines of possible outbreaks and are working on protective measures.

RELATED: Coronavirus: Here’s why it matters, and how it could affect you

In New York City, the Department of Correction is cleaning and sanitizing cells, common spaces, showers and transport buses more regularly. Anyone sick at Rikers Island, the notorious New York City jail where Harvey Weinstein is being held, is screened and could be sent to an area hospital or the department's communicable disease unit.

In Miami, any newly arrested person suspected of having the virus will be diverted to a hospital, said Corrections and Rehabilitation Department spokeswoman Dominique Moody. She said the department has also secured space for a medical quarantine for any of the 3,900 inmates already in custody if it becomes necessary.

Prison staff are being trained in many facilities on how to recognize symptoms and are being given supplies for protection, such as masks, gloves and eye protection. Officials in Philadelphia, meanwhile, are working to secure more money to cover costs if city employees, including jail guards, need to stay home sick.

The precautions have extended outside prison walls to the legal community. Throughout the country, criminal attorneys are meeting with clients via video conference and exercising caution over how they handle and exchange legal documents with inmates.

San Antonio-based attorney Joseph Hoelscher said several judges there have encouraged attorneys to postpone routine courthouse appearances for cases that are not nearing trial to avoid having to bring prisoners to the courthouse.

“We are not going to any jails,” he said. “That would be the first population where it would spread. And they would get the worst medical care.”

In New York City on Friday, U.S. District Court Judge Colleen McMahon quietly ordered all inmates at the nearby federal jail to be screened for fevers, and said they should not appear in court if they have a temperature of 100.4 degrees Fahrenheit or higher.