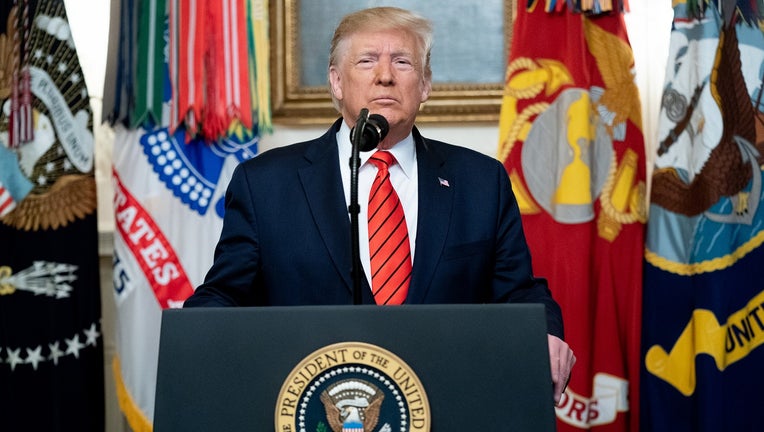 WASHINGTON - U.S. officials braced for Iran to respond to the killing of its most powerful general, noting heightened military readiness in the country and preparing for a possible “tit-for-tat” attempt on the life of an American military commander. They warned ships across Mideast waterways crucial to global energy supplies about the “possibility of Iranian action” against U.S. maritime interests in the region.

President Donald Trump ordered the Jan. 2 strike against Gen. Qassem Soleimani, the head of Iran’s elite Quds Force, after the death of an American contractor in Iraq. Now, amid massive demonstrations of Iran’s public mourning period for Soleimani and a state TV report of a deadly stampede at his funeral, officials believe the next steps by America’s longtime foe will determine the ultimate course of the latest crisis.

While officials say American intelligence isn’t clear on whether Iran’s latest military moves are designed to bolster Tehran’s defenses or prepare for an offensive strike, the U.S. is continuing to reinforce its own positions in the region, including repositioning some forces. One official said the U.S. anticipated a “major” attack of some type within the next day or two.

On Monday, Defense Secretary Mark Esper said no decision had been made about withdrawing troops from Iraq. Pro-Iranian factions in the Iraqi Parliament have pushed to oust American troops following Soleimani’s killing on Iraqi soil. Esper spoke to reporters after a letter from a U.S. Marine general circulated that seemed to suggest a withdrawal had been ordered in response to a vote by the Iraqi Parliament over the weekend. “There’s been no decision whatsoever to leave Iraq,” Esper said.

On Tuesday, the U.S. Maritime Administration put out the warning for ships, citing the rising threats after Soleimani’s killing. Oil tankers were targeted last year in mine attacks the U.S. blamed on Iran. Tehran denied being responsible though it did seize oil tankers around the crucial Strait of Hormuz, the narrow mouth of the Persian Gulf through which 20% of the world’s crude oil travels.

Soleimani’s death, which has sparked major protests, further nuclear development and new threats of violence, has raised the prospect of a wide and unpredictable conflict in the Middle East and escalated tensions between Iran and the U.S. 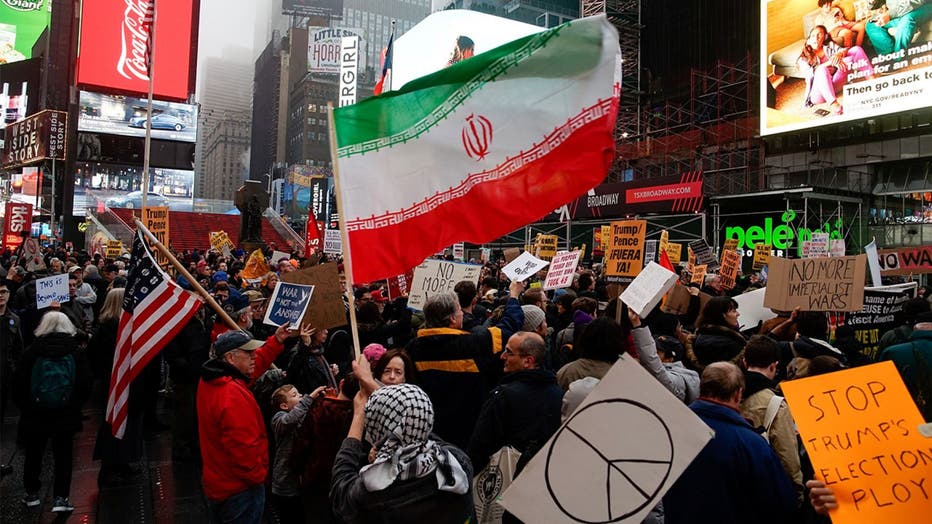 Demonstrators gathered Saturday to protest the Trump administration's killing of an Iranian general and decision to send thousands of additional soldiers to the Middle East. (REUTERS/Eduardo Munoz)

Meanwhile, the U.S. said it would not issue a visa to Iranian foreign minister Mohammed Javad Zarif to attend a U.N. meeting this week. The U.S., which has severely restricted the movements of Iranian diplomats in New York in the past, contends there was not enough time to process the visa request.

The two nations have careened from one flare-up to another since Trump began his “maximum pressure” campaign against Iran shortly after taking office. He abrogated the 2015 nuclear deal and reimposed crushing economic sanctions, both steps aimed at preventing Iran from getting a nuclear weapon and deterring the sort of regional aggression spearheaded by Soleimani.

Two U.S. officials, speaking on condition of anonymity to discuss internal discussions, said targeting Soleimani was not representative of a wholesale shift in American policy toward Iran, despite Secretary of State Mike Pompeo’s comments on Sunday that the U.S. was targeting Iran’s “actual decision-makers” rather than its network of proxy allies. Trump has repeatedly contended that he is not seeking “regime change” in Iran, as has been pushed by some of his more hawkish advisers.

Pompeo sought Tuesday to place the killing of Soleimani within the Trump administration’s campaign on Iran, noting there was a military component to the strategy as well as diplomatic and economic aspects.

“Our Iran policy is about protecting and defending the homeland and protecting and securing American lives,” he said in a State Department news conference. “I know that the efforts that we have taken, not only last week with the strike against Soleimani but the strategy we have employed, has saved American lives.” 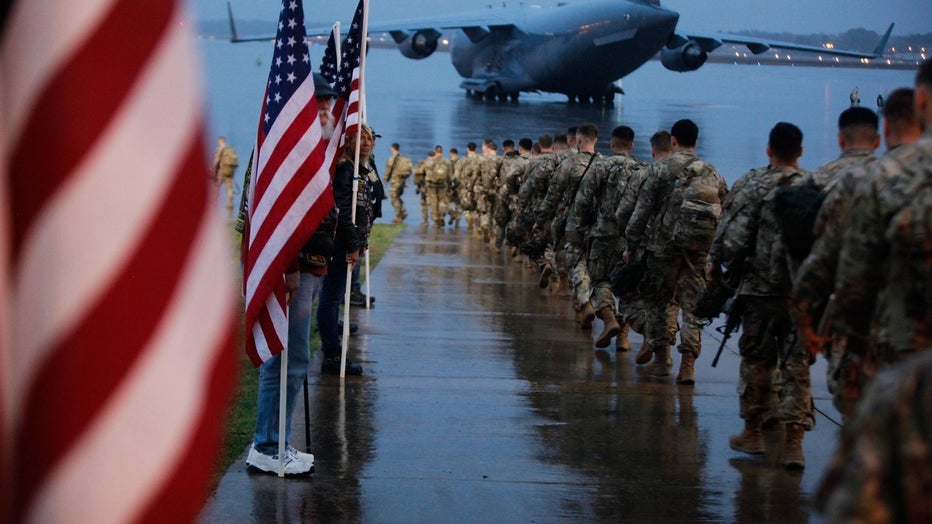 Still, Trump’s strike against Soleimani, a revered figure in Iran whose death sparked large displays of anger and grief, was a risky decision his Republican and Democratic predecessors opted not to take out of concern it would draw the U.S. and Iran closer to conflict.

U.S. officials are also aware that Iran could try to strike a high-level American leader in a “tit-for-tat” move, potentially a military commander.

One official said some Iranian ships have spread out, and while the intent isn’t immediately clear, they could move rapidly to attack.

The U.S. military has increased protection of its forces, particularly in Iraq. Officials said a number of the recently deployed soldiers from the 1st Brigade of the 82nd Airborne Division had moved into Iraq from Kuwait in order to increase security for Americans there. The U.S. military has stopped all training of Iraqi forces to focus on force protection, officials said.

As of Monday, officials said, there had not been a broadly distributed order or recommendation to increase security at military installations worldwide. Instead, decisions were being left up to the commanders.

The U.S. military’s concern about its vulnerability to Iranian attack in the Persian Gulf region has been at a heightened state since about May, when the administration reported it was getting intelligence indications that Iran was planning attacks on U.S. interests in Iraq and elsewhere in the region. The Pentagon sent additional forces to the Gulf at that point, and in July it worked out an arrangement with the government of Saudi Arabia to send U.S. forces to a large base deep in the Saudi desert, in less obvious range of Iranian missiles.

The main hub for American military air operations throughout the Middle East is located at al-Udeid air base in Qatar – within easy range of Iranian missiles. American forces also are stationed in the United Arab Emirates and Kuwait. The Navy’s 5th Fleet, which operates throughout the region, is based at Bahrain.

Meanwhile on Capitol Hill in the U.S., Democrats prepared largely symbolic resolutions under the War Powers Act to limit the president’s military actions regarding Iran. In a letter to House Democrats, Speaker Nancy Pelosi called the airstrike on Soleimani “provocative and disproportionate” and said it had “endangered our servicemembers, diplomats and others by risking a serious escalation of tensions with Iran.”

Congress, which has the sole power to declare war, has complained that Trump did not provide advance notice of his airstrike in Baghdad. Trump did meet the 48-hour deadline required by the War Powers Act to notify Congress after the deadly drone strike. The document was classified, and no public version was released.

Senators will receive a briefing Wednesday on the situation, according to a person familiar with the meeting. Pompeo, Esper, CIA Director Gina Haspel and Army Gen. Mark Milley, chairman of the Joint Chiefs of Staff, are expected to speak. The House is also expected to be briefed this week.

Milley insisted that the intelligence on which Trump based his decision to kill Soleimani called for urgent action.

“I’ll stand by the intelligence I saw,” he said, adding that details had not been made public because they are classified. He said the intelligence showed Soleimani was plotting attacks and that the U.S. would have been negligent not to act. “It was imminent,” he said, “and it was very, very clear in scale and scope. Did it exactly say who, what, when and where? No, but he was planning, coordinating and synchronizing significant operations against U.S. military forces in the region, and it was imminent.”

The stampede reportedly took place in the hometown of Revolutionary Guard Gen. Qassem Soleimani as the procession got underway.