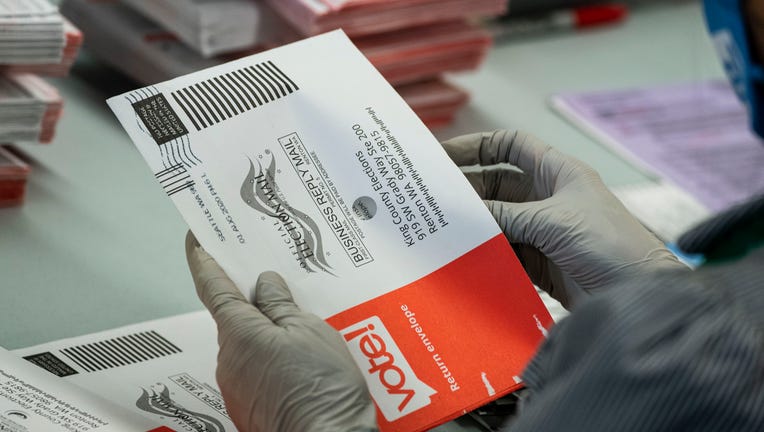 WASHINGTON (AP) - U.S. intelligence officials believe that Russia is using a variety of measures to denigrate Democratic presidential candidate Joe Biden ahead of the November election and that individuals linked to the Kremlin are boosting President Donald Trump's reelection bid, the country’s counterintelligence chief said Friday in the most specific warning to date about the threat of foreign interference.

U.S. officials also believe that China does not want Trump to win a second term and has accelerated its criticism of the White House, expanding its efforts to shape public policy in America and to pressure political figures seen as opposed to Beijing's interests.

The statement from William Evanina is believed to be the most pointed declaration by the U.S. intelligence community linking the Kremlin to efforts to get Trump reelected — a sensitive subject for a president who has rejected intelligence agency assessments that Russia tried to help him in 2016.

It also links Moscow's disapproval of Biden to his role in shaping Obama administration policies supporting Ukraine, an important U.S. ally, and opposing Russian leader Vladimir Putin. That assertion conflicts with the narrative advanced by Trump, who has made unsubstantiated claims that Biden’s actions in Ukraine were intended to help the business interests of his son, Hunter.

RELATED: Republicans aiding Kanye West's bid to get on ballot in several states ahead of 2020 election

Evanina's statement, three months before the election, comes amid criticism from House Speaker Nancy Pelosi and other congressional Democrats that the intelligence community has been withholding from the public specific intelligence information about the threat of foreign interference in American politics.

The latest intelligence assessment reflects concerns not only about Russia but China and Iran as well, warning that hostile foreign actors may seek to compromise election infrastructure, interfere with the voting process or call into question voting results. Despite those efforts, officials see it as unlikely that anyone could manipulate voting results in any meaningful way, Evanina said.

“Many foreign actors have a preference for who wins the election, which they express through a range of overt and private statements; covert influence efforts are rarer,” said Evanina, director of the National Counterintelligence Security Center. “We are primarily concerned about the ongoing and potential activity by China, Russia and Iran.”

What to know about mail voting

The ongoing COVID-19 pandemic is pushing states to ramp up their mail in voting efforts for the 2020 election, but the rules vary from state to state.

Concerns about election interference are especially acute following a wide-ranging effort by Russia to meddle in the 2016 election on Trump’s behalf through both the hacking of Democratic emails and a covert social media campaign aimed at sowing discord among U.S. voters. Trump has routinely resisted the idea that the Kremlin favored him in 2016, but the intelligence assessment released Friday indicates that unnamed Kremlin-linked actors are again working to boost his candidacy on social media and Russian television.

The White House responded to Friday's news with a statement saying “the United States will not tolerate foreign interference in our electoral processes and will respond to malicious foreign threats that target our democratic institutions."

“The United States is working to identify and disrupt foreign influence efforts targeting our political system, including efforts designed to suppress voter turnout or undermine public confidence in the integrity of our elections,” said the statement from National Security Council spokesman John Ullyot.

In a separate statement, the Trump campaign said it didn't want or need foreign assistance and said China and Iran were opposed to Trump because “he has held them accountable after years of coddling by politicians like Joe Biden."

Democrats in Congress who have participated in recent classified briefings on the election interference threat have expressed alarm at what they have heard. They have urged the U.S. intelligence community to make public some of their concerns, in part to avoid a repeat of 2016, when Obama administration officials were seen as slow and overly deliberate in their public discussion of active Russian measures in that year's election.

A bipartisan congressional report released by the Senate intelligence committee earlier this year said the Obama administration was ill-prepared to handle the interference and failed to respond effectively as officials feared getting caught up in a heavily politicized environment and undermining the election.

When it comes to Russia this year, U.S. intelligence officials assess that it is working to “denigrate” Biden and what it sees as an anti-Russia “establishment” among his supporters, Evanina said. U.S. officials believe that tracks Moscow’s criticism of Biden when he was vice president for his role in Ukraine policies and his support of opposition to Putin inside Russia.

The U.S. statement called out by name Andriy Derkach, a pro-Russia Ukrainian lawmaker who has been active in leveling unsubstantiated corruption allegations against Biden and his son concerning Burisma, the Ukrainian natural gas company on whose board Hunter Biden sat. That effort has included publicizing leaked phone calls.

Democrats, including members of the Senate intelligence panel, have voiced concerns that an ongoing Republican probe into Hunter Biden and his work in Ukraine would parallel Russian efforts and amplify Russian disinformation. That investigation is being led by Sen. Ron Johnson of Wisconsin, the chairman of Senate Homeland Security and Governmental Affairs committee. He has denied any wrongdoing.

Though U.S. officials allege that China has its own preference, the statement Friday did not directly accuse Beijing of election interference or taking action to prop up Biden.

Instead, the statement said, China views Trump as “unpredictable” and does not want to see him win reelection, Evanina said. China has been expanding its influence efforts ahead of the November election in an effort to shape U.S. policy and pressure political figures it sees as against Beijing. The Trump administration's relationship with China has taken a starkly more adversarial tone, including the closure last month of Beijing's consulate in Houston and an executive order Thursday that banned dealings with the Chinese owners of consumer apps TikTok and WeChat,

President Donald Trump has ordered an unspecified ban on transactions with the Chinese owners of the consumer apps TikTok and WeChat.

“Although China will continue to weigh the risks and benefits of aggressive action, its public rhetoric over the past few months has grown increasingly critical of the current administration’s COVID-19 response, closure of China’s Houston consulate and actions on other issues,” he wrote.

On Iran, the assessment said Tehran seeks to undermine U.S. democratic institutions as well as Trump and divide America before the election.

“Iran’s efforts along these lines probably will focus on online influence, such as spreading disinformation on social media and recirculating anti-U.S. content,” Evanina wrote. “Tehran’s motivation to conduct such activities is, in part, driven by a perception that President Trump’s re-election would result in a continuation of U.S. pressure on Iran in an effort to foment regime change.”