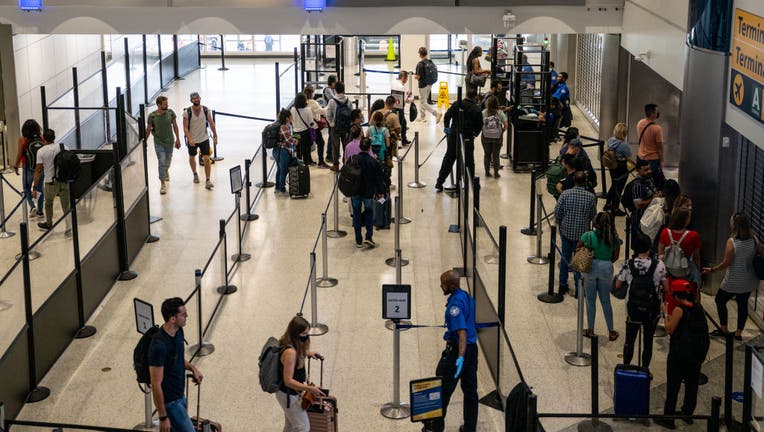 HOUSTON, TEXAS - SEPTEMBER 02: People check in for departure flights at the George Bush Intercontinental Airport on September 02, 2022 in Houston, Texas. Airports around the country are expecting large volumes of travelers ahead of this Labor Day wee

Hundreds of flights were delayed on major U.S. airlines ahead of the Labor Day holiday.

According to the cancellation tracker FlightAware, there have been 2,000 delays within, into or out of the U.S. on Saturday, as well as 118 cancellations.

These delays come as the American Automobile Association forecasts about 32% of Americans will travel this Labor Day weekend.

The federation predicts this will be the busiest Labor Day travel weekend in three years, reaching pre-pandemic status, according to Fox Weather.

After months of frustrating cancellations and delays, the Department of Transportation announced on Thursday that it had launched an airline customer service dashboard, resulting in "significant changes" from all but one of the ten largest U.S. airlines.

"Passengers deserve transparency and clarity on what to expect from an airline when there is a cancelation or disruption," Transportation Sec. Pete Buttigieg said in a statement. "This dashboard collects that information in one place so travelers can easily understand their rights, compare airline practices, and make informed decisions."

"The Department will continue to support passengers and to hold airlines responsible for adhering to their customer obligations," he pledged.

Previous summer cancellations have been blamed on staffing shortages, particularly among airline pilots.

While federal officials have blamed understaffing at airlines, airlines have pointed to staffing problems the Federal Aviation Administration.

The rate of cancellations is up about one-third from the same time in 2019.

The rate of delayed flights is up by nearly a fourth.

The Associated Press contributed to this report. Read more of this story on FOX Business.