Satellite imagery just released shows a mass burial site in Bucha, Ukraine, and bodies laying on the streets for weeks after Russian forces destroyed the area. Russia has previously claimed that the bodies were on the city streets only after their forces had left the area, but the satellite images completely contradicts those statements, showing images of bodies on the streets well before Russian soldiers had left Bucha.

KYIV, Ukraine - Ukraine’s intelligence unit on Saturday claimed that Ukrainian civilians in the Kharkiv region gave poisoned cakes to Russian soldiers, killing two of them and sickening 28 others.

The Ministry of Defense’s intelligence agency shared a Facebook post on April 2 stating that civilians in the city of Izium in eastern Ukraine baked poisoned cakes for troops from Russia’s 3rd Motor Rifle Division.

"As a result, two invaders were killed at once, another 28 went to intensive care," the Ukrainian Ministry of Defense’s intelligence unit said, according to the English translation.

It noted how the conditions of the hospitalized soldiers were unclear.

"Ukrainians resist the occupiers by all available means," the intelligence unit added. 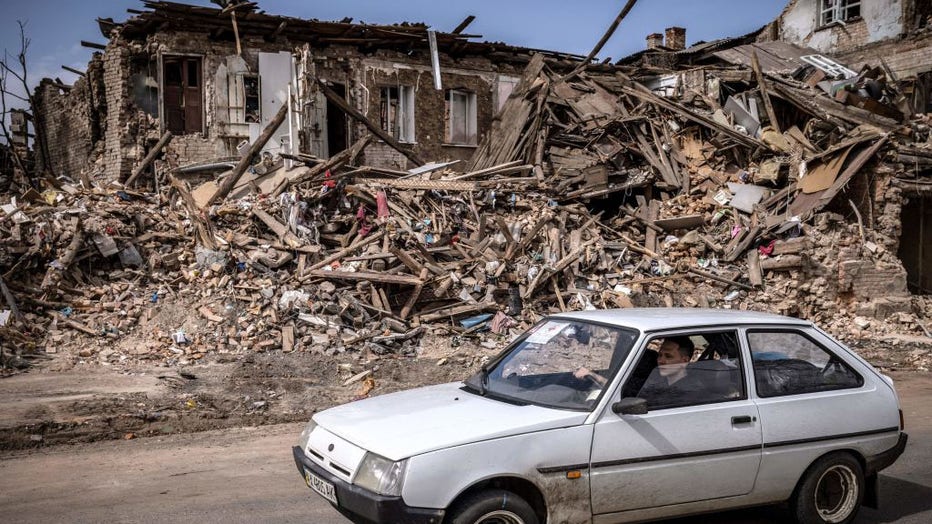 FILE IMAGE - A man drives a car past the rubble of a destroyed building in the eastern Ukraine city of Kharkiv on April 2, 2022. (Photo by FADEL SENNA/AFP via Getty Images)

The Ukrainian agency also claimed that about 500 more Russian soldiers were hospitalized "due to heavy alcohol poisoning of unknown origin." It said the Russian command had written off these cases as "not combat losses," according to the translation.

The claims come as grisly images of civilians apparently killed by Russian forces in towns on the outskirts of Kyiv before they withdrew have caused a global outcry. Ukrainian President Vladimir Zelenskyy said that civilians had been tortured, shot in the back of the head, thrown down wells, blown up with grenades in their apartments and crushed to death by tanks while in cars.

The head of the local council in Borodyanka surveyed extensive damage following the withdrawal of Russian forces from the Kyiv region in footage released on April 5, 2022. Credit: General Staff of the Armed Forces of Ukraine via Storyful

Zelenskyy told the U.N. Security Council on Tuesday that those responsible should immediately be brought up on war crimes charges in front of a tribunal like the one established at Nuremberg after World War II. Western governments were preparing to toughen sanctions against Russia and send more weapons to Ukraine in response.

Meanwhile, Moscow regrouped its forces for a new assault on Ukraine’s east and south at the end of the war's sixth week.