KYIV, Ukraine - Ukrainian President Volodymyr Zelenskyy on Friday claimed that his country's intelligence service has uncovered plans for a Russia-backed coup d'etat in the country set for next week that allegedly involves one of Ukraine's richest oligarchs.

Both the oligarch and the Russian government rejected the allegations. In Nantucket, Massachusetts, where he is spending a holiday weekend, U.S. President Joe Biden expressed concern at the coup talk and renewed U.S. support for Ukraine's sovereignty and self-government.

At a news conference in Kyiv, the Ukrainian capital, Zelenskyy said he received information that a coup was being planned for next Wednesday or Thursday. He did not give many details to back up his allegation, but pointed to a suspected role of Ukraine’s richest oligarch, Rinat Akhmetov.

The president said that Ukrainian intelligence has audio recordings of an alleged meeting between Russian and Ukrainian officials discussing a plan for a coup allegedly funded by Akhmetov, whose fortune is estimated at $7.5 billion.

Zelenskyy refused to disclose further details about the alleged coup, saying only that he doesn’t plan to flee the country. 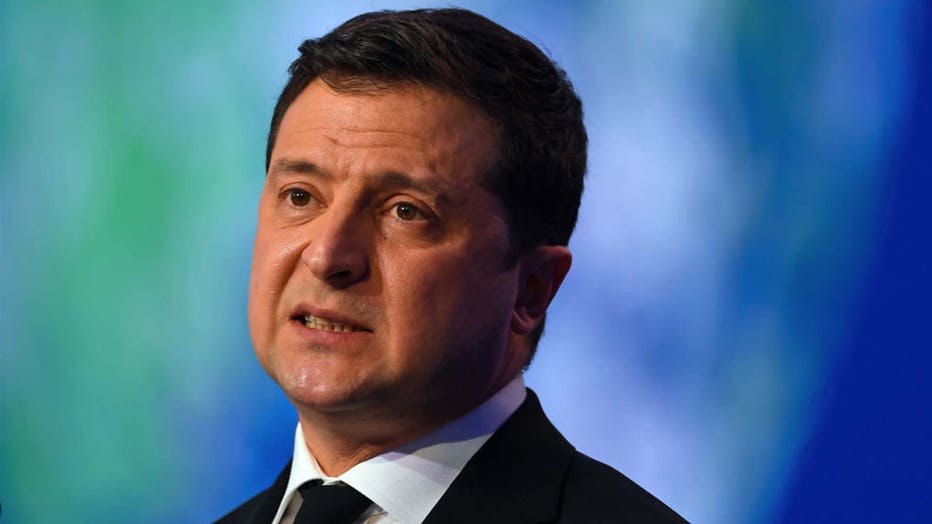 Kremlin spokesman Dmitry Peskov rejected the allegations in comments to journalists in Moscow on Friday.

"Russia had no plans to get involved," Peskov said. "Russia never does such things at all."

Akhmetov called Zelenskyy’s allegations "an absolute lie." "I am outraged by the spread of this lie, no matter what the President’s motives are," Akhmetov said in a statement, relayed to the Associated Press by his spokeswoman Anna Terekhova.

Asked about the alleged coup plans, the U.S. State Department’s top official for European and Eurasian affairs, Karen Donfried, said: "We are in touch with the Ukrainian government to discuss this further, and we’re working to obtain additional information."

Biden told U.S. reporters he expected to talk to Putin and Zelenskyy, "in all probability."

Volodymyr Fesenko, a Kyiv-based political analyst and head of the Penta Center think tank, told the AP that Zelenskyy targeted Akhmetov after a "proper information war" was waged against the president over the last two months on TV channels the oligarch owns.

A mass protest in front of the president's office is also being planned for Dec. 1.

The analyst pointed to great discontent among Ukrainian oligarchs, including Akhmetov, over a law pushed by Zelenskyy that limits their influence on politics.

Fesenko called Zelenskyy's reference to Akhmetov in connection with the alleged coup "a pre-emptive signal" for the oligarch not to get in involved in "risky political ventures, cross the ‘red lines' and negotiate with Moscow."

In recent weeks, Ukrainian and Western officials have expressed concern that a Russian military buildup near Ukraine could signal plans by Moscow to invade its ex-Soviet neighbor. The Kremlin insists it has no such intention and has accused Ukraine and its Western backers of making the claims to cover up their own allegedly aggressive designs.

RELATED: Iran-backed hackers accused of targeting US with ransomware, other cyber threats

Zelenskyy said Ukraine has full control of its borders and is ready for any escalation of the conflict with Russia. But he noted that the media are engaged in fearmongering over the possibility of such a conflict.

He also said that the head of his office, Andriy Yermak, will soon be in contact with the Russian authorities at the request of the European Council President Charles Michel and German Chancellor Angela Merkel.

"They want contacts between our administration and the Russian administration. I think that in the near future Yermak will contact them. We are absolutely not against" this, Zelenskyy said.