KYIV, Ukraine - Mariupol appeared on the verge of falling to the Russians on Tuesday as Ukraine moved to abandon the steel plant where hundreds of its fighters had held out for months under relentless bombardment in the last bastion of resistance in the devastated city.

The capture of Mariupol would make it the biggest city to be taken by Moscow's forces in the war yet and would give the Kremlin a badly needed victory, though the landscape has largely been reduced to rubble.

More than 260 Ukrainian fighters — some of them seriously wounded and taken out on stretchers — left the ruins of the Azovstal plant on Monday and turned themselves over to the Russian side in a deal negotiated by the warring parties. Ukrainian authorities said they were working to extract the remaining soldiers from the sprawling steel mill. They would not say how many were still there.

Russia called it a surrender. The Ukrainians avoided that word and instead said that the plant's garrison had completed its mission and that there was no way to rescue its members militarily in the otherwise Russian-held city.

"Ukraine needs Ukrainian heroes to be alive. It’s our principle," Ukrainian President Volodymyr Zelenskyy said in announcing that troops had begun leaving the mill and its labyrinth of tunnels and bunkers. 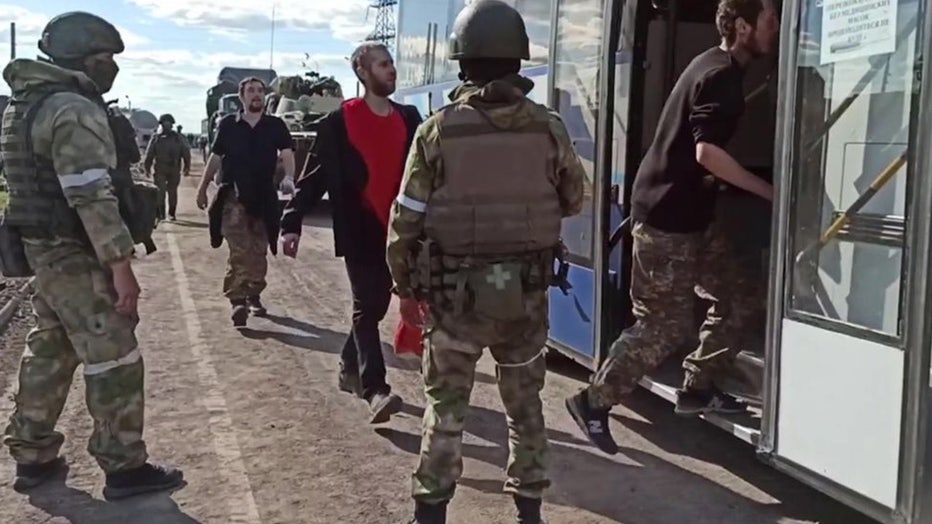 Ukrainian Deputy Defense Minister Hanna Maliar expressed hope that the fighters would be exchanged for Russian prisoners of war. But Vyacheslav Volodin, speaker of the lower house of the Russian parliament, said without evidence that there were "war criminals" among the defenders and that they should not be exchanged but tried.

The operation to abandon the steel plant signaled the beginning of the end of a nearly three-month siege that turned Mariupol into a worldwide symbol of both defiance and suffering.

The Russian bombardment killed over 20,000 civilians, according to the Ukrainian side, and left the remaining inhabitants — perhaps one-quarter of the southern port city's prewar population of 430,000 — with little food, water, heat or medicine.

During the siege, Russian forces launched lethal airstrikes on a maternity hospital and a theater where civilians had taken shelter. Close to 600 people may have been killed at the theater.

Gaining full control of Mariupol would give Russia an unbroken land bridge to the Crimean Peninsula, which it seized from Ukraine in 2014, and deprive Ukraine of a vital port. It could also free up Russian forces to fight elsewhere in the Donbas, the eastern industrial heartland that the Kremlin is bent on capturing.

And it would give Russia a victory after repeated setbacks on the battlefield and the diplomatic front, beginning with the abortive attempt to storm Kyiv, the capital.

Over the past few days, Sweden and Finland announced plans to apply for NATO membership, and Ukraine reported that Moscow’s forces had retreated from around the northeastern city of Kharkiv in the face of counterattacks and had taken heavy losses in an Ukrainian assault on a pontoon bridge in the Donbas.

The Russian victory, though, is mostly symbolic, said Phillips O’Brien, professor of strategic studies at the University of St. Andrews in Scotland.

Ukrainian presidential adviser Mykhailo Podolyak likened the Ukrainian defenders to the vastly outnumbered Spartans who held out against Persian forces in ancient Greece. "83 days of Mariupol defense will go down in history as the Thermopylae of the XXI century," he tweeted.

The soldiers who left the plant were given pat-down searches, loaded onto buses accompanied by Russian military vehicles, and taken to two towns