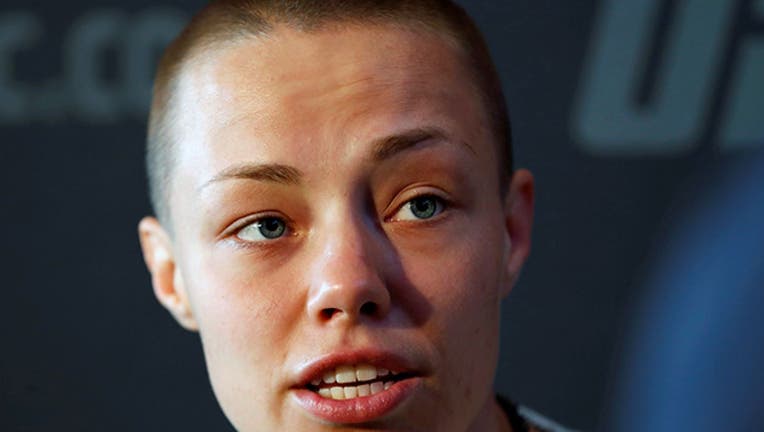 NEW YORK - Rose Namajunas puts her strawweight title up for grabs against Zhang Weil in UFC's return to New York. Kamaru Usman defends his welterweight championship against Colby Covington in the main event of UFC 268 on Saturday.

UFC will hold a card in New York for the first time in two years. Usman can solidify his claim as the greatest welterweight in UFC history ahead of Georges St-Pierre should he beat Covington for the second time. Usman is undefeated in UFC  with 14 straight wins since his 2015 debut. He was pushed to the limit in his first fight with Covington in December 2019.

Rose Namajunas used New York as her breakout city on her way toward UFC stardom. She won the 115-pound title in November 2017 at Madison Square Garden and followed it up just five months later with a successful defense in Brooklyn.

And to think, the Wisconsin native at first didn’t give her fight night locations much thought.

"I’m not really into the historical thing when it comes to arenas," Namajunas said. "It was like, you’re fighting at the Garden! I’m like, OK. After fighting there, that’s when I realized the energy and how special it is. Having that experience now, and going to New York so many times and being really familiar with the city, I appreciate being able to go back again."

The appreciation runs deep at UFC.

For the first time since Donald Trump became the first sitting president to watch cageside and Dwayne Johnson presented one winner a championship belt, the promotion that largely camped out in Nevada, Florida and Abu Dhabi during the pandemic makes a return to the Garden.

It’s back at the city so nice, it had to run back fights twice: UFC 268 on Saturday night at MSG is headlined by two championship rematches. Namajunas puts her strawweight title up for grabs against Zhang Weili. Kamaru Usman defends his welterweight championship against Colby Covington.

Namajunas is on a rematch run since she beat Joanna Jedrzejczyk for the championship five years ago in New York. She won the second bout, as well, before dropping the title to Jessica Andrade. Namajunas won that rematch also, before she won the strawweight championship for a second time with her victory over Zhang in April. Seven months later, they’ll square off again, though with a bit more respectful tone after Namajunas linked the Chinese Zhang to communism in the hype leading into the first fight.

"Obviously, I’m good at rematches," she said with a laugh. "It doesn’t make it any easier."

Namajunas has been candid about her difficulty adapting to a career in the spotlight and even hinted at retirement after she lost to Andrade. She said she wasn’t even sure she was interested in fighting and wanted to "do something else" before a small break revitalized her interest. Namajunas, who earned the nickname "Thug" as a kid from one of her neighbors, had used her post-fight interviews to preach kindness. The blowback from her comments about Zhang also took a toll.

"I think I just realized how much people pay attention to what I’m saying," she said. "But I don’t care about any of that going into this one. People want to bring it up and talk about it."

Namajunas laughed when she said she still has days where "I never want to do this again," but she has a long-term vision of what she wants to accomplish and feels there are enough worthy contenders in the strawweight division that could lead to big-money fights for years. And, buzzcut and all, she feels more at ease in her own skin.

"I’m definitely more comfortable with it, but just with my personality, it’s always going to be a little bit of a challenge," the 29-year-old Namajunas said. "I have a stronger support system and I make sure that I have a proper amount of quiet time. I’m just more mature in general."

Usman can solidify his claim as the greatest welterweight in UFC history ahead of Georges St-Pierre should he beat Covington for the second time. Usman is undefeated in UFC (14 straight wins) since his 2015 debut, though he was pushed to the limit in his first fight with Covington in December 2019.

Usman closed out an occasionally slow fight with Covington in thrilling fashion, knocking down the challenger twice with right hands and then decisively finishing him on the ground.

Covington needs a win to prove he’s more than a one-schtick wonder after he reinvented himself as a MAGA-loving fighter who polarized even the UFC audience and grew close to Trump. The main card also could be a turning point for 40-year-old Frankie Edgar, who has lost four of six heading into his bantamweight fight against Marlon Vera.

"I start talking to guys when they get to an age and get in there and start getting knocked out consistently or just can’t compete at this level anymore," White said. "I don’t feel that way right now about Frankie Edgar. But we’ll see how he does this weekend."

Justin Gaethje fights Michael Chandler and Shane Burgous takes on Billy Quarantillo in the other two fights on the main card.