Security tightens at Capitol amid threats of violence, upcoming inauguration

Hundreds of National Guard members gathered on the floor of the U.S. Capitol on Jan. 13, as lawmakers neared the second impeachment of President Donald Trump in the wake of a deadly siege by his supporters.

WASHINGTON - Uber announced that it will "not hesitate" to ban any users who violate its policies against "violent or illegal behavior" in the wake of the pro-Trump siege of the U.S. Capitol last week.

A company spokesperson said that Uber will be sending in-app messages to drivers regarding unrest at state capitols.

"Our teams are in regular contact with law enforcement and will be working to ensure drivers have the latest safety information as we head into the weekend and approach the inauguration," a spokesperson said. "Uber does not tolerate violent or illegal behavior, and we will not hesitate to ban users who violate our policies."

The company said that drivers are encouraged to cancel trips if they feel unsafe. Anyone reported making "racist" or "disrespectful" comments to drivers will be banned from the platform, according to the company.

"As of now, we will continue operations in the DC area. However, we are in regular contact with law enforcement, the Mayor’s office, and the Presidential Inaugural Committee and will follow their guidance in the coming days," an Uber spokesperson wrote.

The announcement came as several major companies responded to the deadly U.S. Capitol riot that resulted in the deaths of five people.

On Wednesday, Airbnb decided to block and cancel all reservations in the Washington, D.C., area during the week of the presidential inauguration. 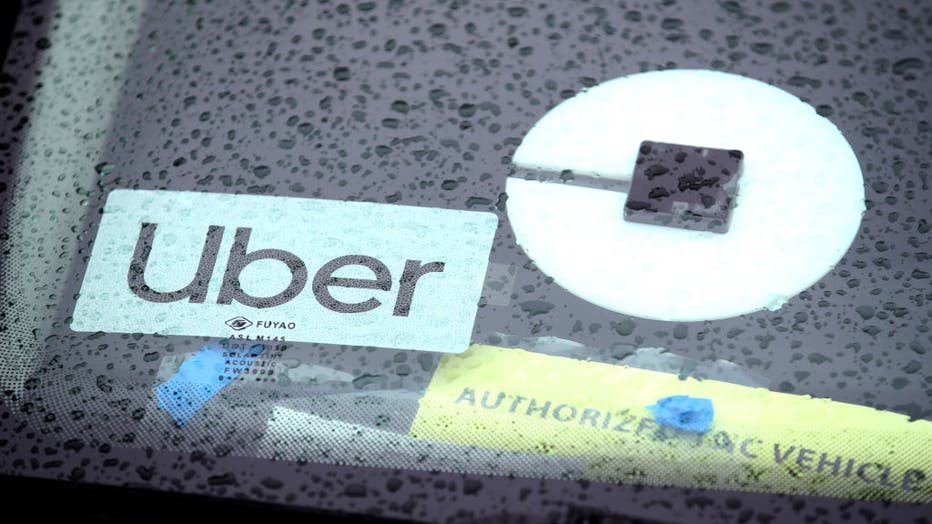 The Uber logo is displayed on a car on March 22, 2019 in San Francisco, California.

The decision was in response to local, state and federal officials asking people not to travel to Washington for the inauguration. Airbnb made the decision two days after it said it was reviewing reservations in the area ahead of the inauguration and said it would bar any guests associated with hate groups or violent activity.

"We are continuing our work to ensure hate group members are not part of the Airbnb community," the company said in a corporate blog post.

Airbnb said that it had learned through media or law enforcement sources the names of individuals confirmed to have been responsible for the criminal activity at the U.S. Capitol. The company said it has investigated whether the named individuals have an account on Airbnb. Through this work, Airbnb said it identified numerous individuals associated with known hate groups or otherwise involved in the criminal activity at the Capitol building, and those users have been banned from Airbnb's platform.

Meanwhile, a labor union representing 7,200 hotel workers in the Washington area called for hotel closures in the area to protect staff and the public.

"Given the danger and fluidity of this situation, the best way to guarantee the safety of hotel workers and District residents is to keep these groups out of the city and out of its hotels," said John Boardman, executive secretary-treasurer of Unite Here Local 25. "But the threat has not dissipated, as we continue to hear reports of armed, far-right militias planning to threaten Washington in the days ahead."

Marriott International said Wednesday that its hotels in the Washington area will remain open leading up to and through the inauguration.

"We have many official participants of the inauguration staying with us and plan on upholding those reservations," the company said in a statement to The Associated Press. "We, of course, have the safety of our guests and associates top of mind given the recent events. We are monitoring the situation very closely and have operational and security plans in place."