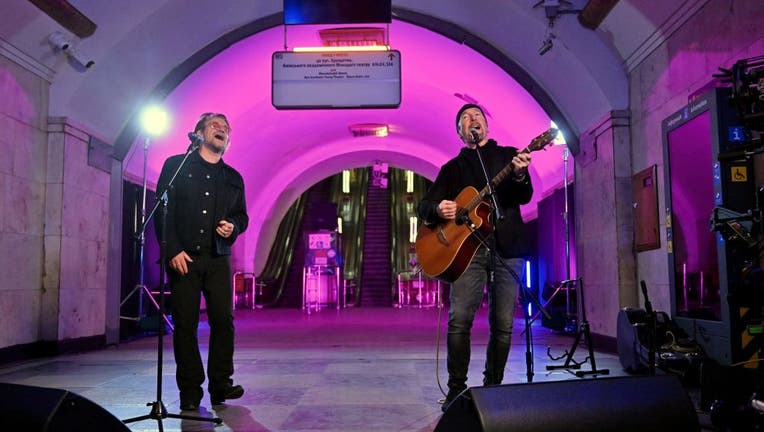 Bono (Paul David Hewson), Irish singer-songwriter, activist, and the lead vocalist of the rock band U2, and guitarist David Howell Evans (R) aka 'The Edge', perform at subway station which is bomb shelter, in the center of Ukrainian capital of Kyiv o

U2’s Bono and The Edge performed a surprise 40-minute acoustic set in a metro station in Ukraine's capital Sunday as a show of support for the troops in their fight against Russia’s military aggression.

"The people in Ukraine are not just fighting for your own freedom, you are fighting for all of us who love freedom," Bono told the crowd of about 100 at the Khreshchatyk metro station converted into a bomb shelter. "We pray that you will enjoy some of that peace soon."

Bono tweeted earlier Sunday that Ukrainian President Volodymyr Zelenskyy had invited them to perform in Kyiv "as a show of solidarity with the Ukrainian people."

"This evening, 8th of May, shows will ring out in the Ukraine sky, but you’ll be free at last," Bono told the crowd in between songs. "They can take your lives, but they can never take your pride."

The duo played some of U2’s classic hits like "With or With You" and "Desire." At one point, Bono invited a Ukrainian soldier to join them sing the Ben E. King standard "Stand by Me," with the "Me" changed to "Ukraine."

"It’s a Beautiful Day in the Kyiv metro," U.S. Secretary of State Anthony Blinken tweeted. "The people of Ukraine have shown remarkable determination and resilience in the face of this brutal invasion. WE stand #UnitedWithUkraine and support its pursuit of more peaceful, democratic, and beautiful days ahead."

The Ukrainians have put up a fierce resistance since Russia invaded Ukraine on Feb. 24. Russian forces withdrew from the capital towards end May to concentrate in the eastern part of the country.