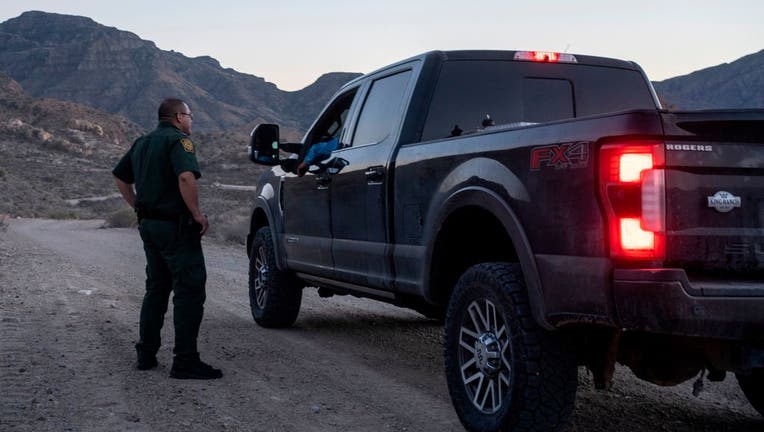 Border Patrol Agent Arain Carrera checks a passing truck near Ruidosa, Texas on January 28, 2020, in the Big Bend Sector, which is the largest Border Patrol sector along the US-Mexico Border. (Photo by PAUL RATJE/AFP via Getty Images)

CALIFORNIA - U.S. Border Patrol agents are reporting a disturbing trend of smugglers attempting to use tractor-trailers to sneak people into the United States.

The Border Patrol says that in the latest incident on April 20, a tractor-trailer was being inspected as it attempted to cross the border in Southern California. During the inspection of the vehicle, a canine detection team alerted to the cab area of the truck and the vehicle was taken aside for further inspection.

When brought to the secondary inspection area, Border Patrol agents say they saw three people jumping out of the truck cab and attempting to run away. Agents quickly detained all three, including two men and an unaccompanied girl.

All three were determined to be undocumented.

The truck’s driver, a 36-year-old Mexican man, and the three others were all placed under arrest and will be deported.

In March, agents discovered 42 smuggled immigrants packed inside of a utility trailer near the border in Calexico.  Additionally, there were two similar smuggling events that occurred in January and February of this year.

Since the beginning of this year, Border Patrol agents in the El Centro Sector in Southern California have rescued 86 undocumented immigrants from potentially life-threatening human smuggling situations.

"The increase in tractor-trailer smuggling continues to illustrate the total disregard that smuggling organizations have for the well-being of the people they are smuggling," said Chief Patrol Agent Gregory K. Bovino.