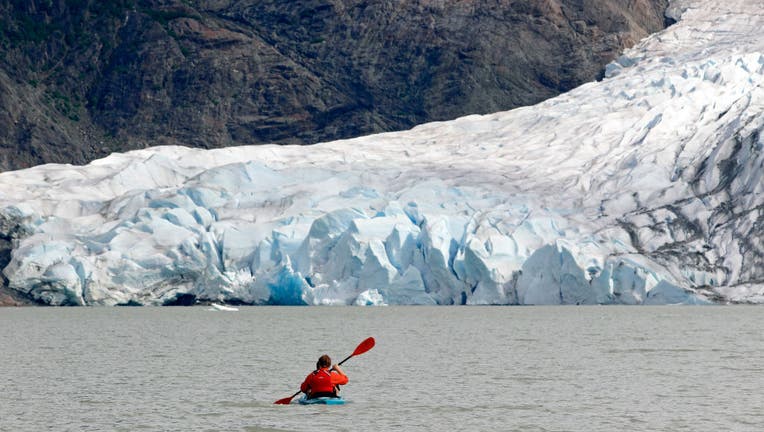 The world’s glaciers are shrinking and disappearing faster than scientists thought, with two-thirds of them projected to melt out of existence by the end of the century at current climate change trends, according to a new study.

But if the world can limit future warming to just a few more tenths of a degree and fulfill international goals — technically possible but unlikely according to many scientists — then slightly less than half the globe’s glaciers will disappear, said the same study. Mostly small but well-known glaciers are marching to extinction, study authors said.

In an also unlikely worst-case scenario of several degrees of warming, 83% of the world’s glaciers would likely disappear by the year 2100, study authors said.

The study in Thursday’s journal Science examined all of the globe’s 215,000 land-based glaciers -- not counting those on ice sheets in Greenland and Antarctica -- in a more comprehensive way than past studies. Scientists then used computer simulations to calculate, using different levels of warming, how many glaciers would disappear, how many trillions of tons of ice would melt, and how much it would contribute to sea level rise.

A large chunk of an Alpine glacier broke loose and roared down a mountain in Italy, sending ice, snow and rock slamming into hikers on a popular trail. Video credit: @steverganii via Storyful

The world is now on track for a 2.7-degree Celsius (4.9 degrees Fahrenheit) temperature rise since pre-industrial times, which by the year 2100 means losing 32% of the world’s glacier mass, or 48.5 trillion metric tons of ice as well as 68% of the glaciers disappearing. That would increase sea level rise by 4.5 inches (115 millimeters) in addition to seas already getting larger from melting ice sheets and warmer water, said study lead author David Rounce.

"No matter what, we’re going to lose a lot of the glaciers," Rounce, a glaciologist and engineering professor at Carnegie Mellon University, said. "But we have the ability to make a difference by limiting how many glaciers we lose."

"For many small glaciers it is too late," said study co-author Regine Hock, a glaciologist at the University of Alaska Fairbanks and the University of Oslo in Norway. "However, globally our results clearly show that every degree of global temperature matters to keep as much ice as possible locked up in the glaciers."

Projected ice loss by 2100 ranges from 38.7 trillion metric tons to 64.4 trillion tons, depending on how much the globe warms and how much coal, oil and gas is burned, according to the study.

"Today is a day of celebration, a day we take another giant step in our momentous agenda," said House Speaker Nancy Pelosi, D-Calif., who minutes later announced the final vote as she presided over the chamber. She said the measure "meets the moment, ensuring that our families thrive and that our planet survives."

That 4.5 inches of sea level rise from glaciers would mean more than 10 million people around the world — and more than 100,000 people in the United States — would be living below the high tide line, who otherwise would be above it, said sea level rise researcher Ben Strauss, CEO of Climate Central. Twentieth-century sea level rise from climate change added about 4 inches to the surge from 2012 Superstorm Sandy costing about $8 billion in damage just in itself, he said.

But the loss of glaciers is about more than rising seas. It means shrinking water supplies for a big chunk of the world’s population, more risk from flood events from melting glaciers and about losing historic ice-covered spots from Alaska to the Alps to even near Mount Everest’s base camp, several scientists told The Associated Press.

"For places like the Alps or Iceland... glaciers are part of what makes these landscapes so special," said National Snow and Ice Data Center Director Mark Serreze, who wasn’t part of the study but praised it. "As they lose their ice in a sense they also lose their soul."

Hock pointed to Vernagtferner glacier in the Austrian Alps, which is one of the best-studied glaciers in the world, but said "the glacier will be gone."

The Columbia Glacier in Alaska had 216 billion tons of ice in 2015, but with just a few more tenths of a degree of warming, Rounce calculated it will be half that size. If there’s 4 degrees Celsius (7.2 degrees Fahrenheit) of warming since pre-industrial times, an unlikely worst-case scenario, it will lose two-thirds of its mass, he said.

"It’s definitely a hard one to look at and not drop your jaw at," Rounce said.

Glaciers are crucial to people’s lives in much of the world, said National Snow and Ice Center Deputy Lead Scientist Twila Moon, who wasn’t part of the study.

Moon said the study "represents significant advances in projecting how the world’s glaciers may change over the next 80 years due to human-created climate change."

That’s because the study includes factors in glacier changes that previous studies didn’t and is more detailed, said Ruth Mottram and Martin Stendel, climate scientists at the Danish Meteorological Institute who weren't part of the research.

This new study better factors in how the glaciers’ ice melts not just from warmer air, but water both below and at the edges of glaciers and how debris can slow melt, Stendel and Mottram said. Previous studies concentrated on large glaciers and made regional estimates instead of calculations for each individual glacier.

In most cases, the estimated loss figures Rounce’s team came up with are slightly more dire than earlier estimates.

If the world can somehow limit warming to the global goal of 1.5 degrees Celsius (2.7 degrees Fahrenheit) of warming since pre-industrial times -- the world is already at 1.1 degrees (2 degrees Fahrenheit) -- Earth will likely lose 26% of total glacial mass by the end of the century, which is 38.7 trillion metric tons of ice melting. Previous best estimates had that level of warming melting translating to only 18% of total mass loss.

"I have worked on glaciers in the Alps and Norway which are really rapidly disappearing," Mottram said in an email. "It’s kind of devastating to see."