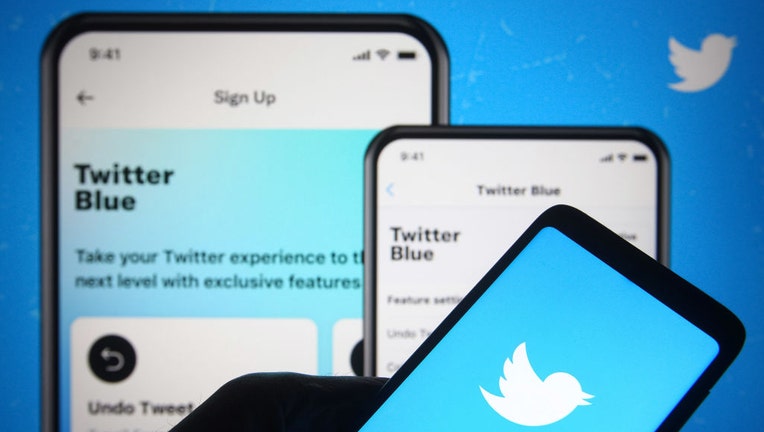 In this photo illustration, Twitter logo is seen on a smartphone in a hand in front of a Twitter webpage about launch new subscription service Twitter Blue. (Pavlo Gonchar/SOPA Images/LightRocket via Getty Images)

After several delays, Twitter Blue has relaunched Monday. The service will cost $8 a month for web users and $11 a month for iPhone users.

With the improved service, Twitter Blue subscribers will now see fewer ads, be able to post longer videos, and have their tweets featured more prominently.

Twitter Blue subscribers can't change their display name or username after receiving a blue checkmark, according to Twitter. The company says their planning to implement a new process soon for display/user name changes.

The blue checkmark was originally given to companies, celebrities, government entities, and journalists verified by the social media platform.

Twitter explains that people with new user accounts can't sign up for Twitter Blue for 90 days. The company says their working on an updated process for new Twitter accounts to help lower impersonation risks and may enforce waiting periods for new accounts without notice.

"Thanks for your patience as we’ve worked to make Blue better – we’re excited and looking forward to sharing more with you soon!" Twitter wrote Saturday.

After Musk bought Twitter for $44 billion in October, he launched a service granting blue checks to anyone willing to pay $8 a month. But it was flooded by imposter accounts, including from some impersonating Musk's businesses Tesla and SpaceX, so Twitter suspended the service days after its launch.