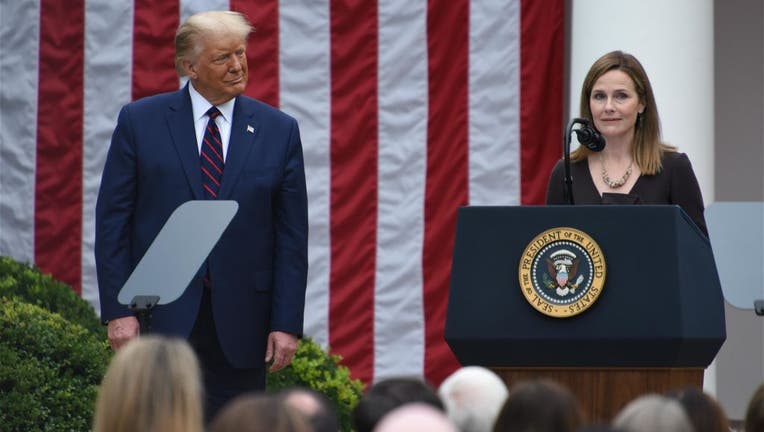 WASHINGTON - President Donald Trump said Sunday that confirmation of his Supreme Court nominee Amy Coney Barrett will go “quickly” but his Democratic rival, Joe Biden, implored the Republican-led Senate to hold off on voting on her nomination until after the Nov. 3 election to “let the people decide.”

Speaking at a press conference at the White House, the president spotlighted Barrett's Roman Catholic religion, portraying her as a victim of attacks on her faith. But it's her conservative approach to the law, particularly health care access that is drawing opposition from Democrats, not her private beliefs.

“It's a disgrace,” Trump said. He vowed she will be confirmed “very quickly.”

Trump's announcement of Barrett for the seat held by the late Justice Ruth Bader Ginsburg is launching a high-stakes, fast-track election season fight over confirmation of a conservative judge who is expected to shift the court rightward as it reviews health care, abortion access and other hot-button issues.

Biden on Sunday appealed directly to his former colleagues in the Senate to “take a step back from the brink."

Biden urged Senate Republicans not to fan a controversy during an already tumultuous election year for a country reeling from the coronavirus crisis, a struggling economy and protests over racial injustice. If Trump wins the election, Biden said the president’s nominee should have a vote. But Biden said he should choose the next justice if he prevails on Nov. 3.

“This is time to de-escalate,” Biden said in Wilmington, Delaware.

No justice has ever been confirmed to the Supreme Court so close to a presidential election with early voting already underway in some states. Republicans believe the fight ahead will boost voter enthusiasm for Trump and Senate Republicans at serious risk of losing their majority. Democrats warn Barrett's confirmation would almost certainly undo Americans' health care protections as the high court takes up a case against the Affordable Care Act in the fall.

According to a national poll by The New York Times and Siena College that was released Sunday, a clear majority — 56% — of voters believes the winner of the Nov. 3 presidential election should fill Ginsburg’s seat, versus 41% who said Trump should as the current president. Biden has said he would nominate the first Black woman to the court, but he has not released the names of his potential choices.

The poll, which was conducted Sept. 22-24, had a margin of sampling error of 3.5 percentage points.

House Speaker Nancy Pelosi declined to say Sunday whether Barrett, a judge on the 7th U.S. Circuit Court of Appeals, is qualified to serve. But she argued that Trump was moving quickly to fill the vacancy before the court hears a challenge to the Affordable Care Act on Nov. 10.

“It’s not about this justice. It’s about any justice he would appoint right now,” Pelosi said on CNN’s “State of the Union.”

Pelosi, a practicing Catholic like Barrett, sidestepped any focus on Barrett’s conservative religious outlook, which California Sen. Dianne Feinstein, a Democrat, brought up in Barrett’s Senate hearings in 2017 when Trump nominated her for the appellate bench.

Pelosi said, "What I am concerned about is anyone that President Trump would have appointed was there to undo the Affordable Care Act.”

“The Senate will confirm her next month,” declared Sen. Tom Cotton, R-Ark., on CNN.

With only two of the 53 Republican senators voicing opposition to a confirmation vote before the Nov. 3 election, Democrats appeared outnumbered — and without recourse to block the nomination.

Sen. Dick Durbin, D-Ill., the assistant leader, said Democrats can slow down the confirmation by a matter of hours or days, "but we can’t stop the outcome.”

The president said he had considered Barrett for an opening in 2018 before he ultimately settled on Brett Kavanaugh, but he explained that she “seemed like a natural fit” after Ginsburg's death.

If confirmed, Barrett’s addition would make for the sharpest ideological swing on the Supreme Court since Clarence Thomas replaced Justice Thurgood Marshall nearly three decades ago.

Earlier, Trump acknowledged the confirmation ahead may not “go smoothly.”

Trump said, “Perhaps it will, perhaps it won’t,” in an interview shortly after the announcement with Fox News Channel that aired Sunday.

Other Republican senators say a post-election confirmation vote is also possible, as the GOP will continue to control the Senate in the lame-duck period between the election and inauguration.

In a memo to colleagues, Senate Democratic leader Chuck Schumer warned of the GOP's “monomaniacal drive” to confirm the nominee ahead of the election.

Schumer told Senate Democrats, “Our number one job is to communicate exactly what is at stake for the American people if Republicans jam through this nominee. The elimination of the Affordable Care Act is at the top of the list.”

Barrett has been critical of Chief Justice John Roberts’ 2012 opinion upholding the health care law. Ginsburg was one of five votes that saved the law on two prior court challenges.

Asked about potential House maneuvers to stall the nomination, such as impeaching Attorney General William Barr, Pelosi quipped, “What is the use of talking about that?” She stressed that Americans should “vote, vote, vote” to put Democrats in charge of the White House, House and Senate.