President Donald Trump signed the Supporting Veterans in STEM Careers Act into law. The legislation is aimed at giving veterans an easier path to careers in science, technology, engineering and math after active duty.

WASHINGTON - A new law aimed at giving veterans an easier path to careers in science, technology, engineering and math was signed into law by President Donald Trump.

Trump held a signing ceremony in the Oval Office for the Supporting Veterans in STEM Careers Act on Tuesday. The new law requires the National Science Foundation to form an outreach plan and publish details on veterans and their participation in STEM fields.

“I thank my colleagues in the Senate and House for unanimously supporting this bipartisan effort to ensure our nation’s veterans have the skills and opportunities to succeed in STEM careers, and I applaud President Trump for signing it into law,” Rubio said. 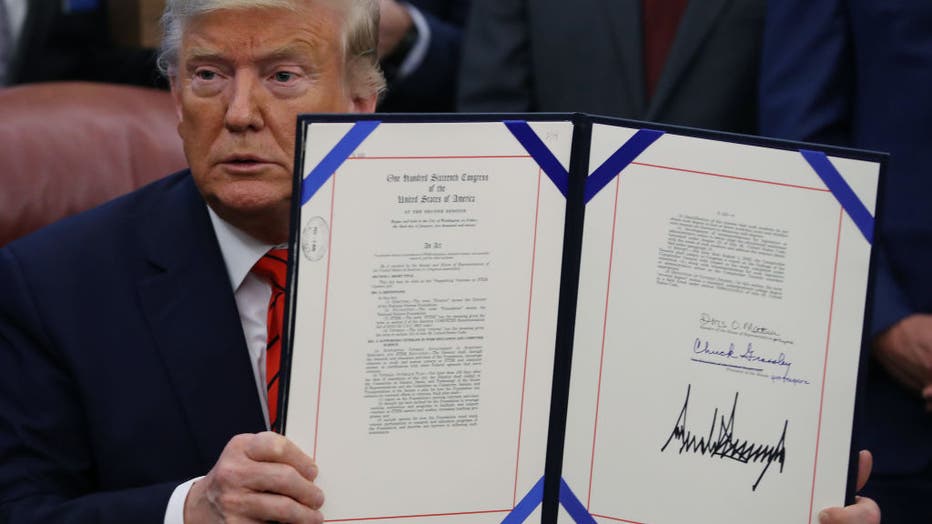 U.S. President Donald Trump signs the Supporting Veterans in STEM Careers Act, in the Oval office at the White House on February 11, 2020 in Washington, DC. (Photo by Mark Wilson/Getty Images)

Rep. Neal Dunn, who introduced a companion bill in the House last month, said this law will ease the transition from active duty to civilian life by expanding education and job opportunities.

“President Trump recognizes the importance of keeping our promise to America’s heroes and ensuring they have the tools they need to succeed in civilian life,” Dunn said. “STEM related jobs are growing at an unprecedented rate in the United States and many of our veterans have the unique skills to excel in these fields.”

Sen. Amy Klobuchar, who is a Democratic presidential candidate, also applauded the bill.

“Now that the Supporting Veterans in STEM Careers Act has been signed into law, we can provide veterans with the tools to secure well-paying jobs in science, technology, engineering, and math through STEM career training,” Klobuchar said.

“Our bipartisan legislation will not only help veterans to succeed, but also enable employers to better meet their hiring needs and strengthen our economy and our nation.”