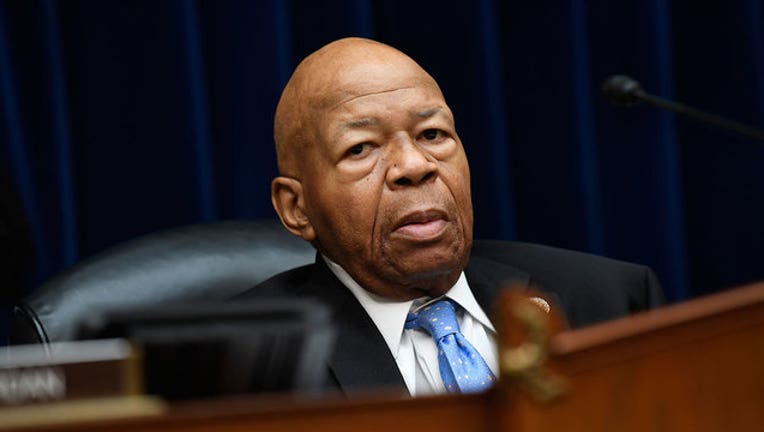 WASHINGTON (AP) - President Donald Trump on Saturday denigrated a majority-black district represented by a congressional nemesis as a "disgusting, rat and rodent infested mess," broadening a campaign against prominent critics of his administration that has exacerbated racial tensions.

Trump lashed out in tweets against Rep. Elijah Cummings, the powerful House Oversight Committee chairman, claiming his Baltimore-area district is "considered the worst run and most dangerous anywhere in the United States." It was the president's latest assault on a prominent lawmaker, and the people he represents, two weeks after he sparked nationwide controversy with racist tweets directed at four congresswomen of color.

His comments against Cummings, who leads multiple investigations of the president's governmental dealings, drew swift condemnation from Democrats, including would-be presidential rivals.

Trump called Cummings a "brutal bully" after his public tongue-lashing of top Homeland Security officials over conditions for migrants detained along the southern border.

Cummings replied directly to Trump on Twitter, saying, "Mr. President, I go home to my district daily. Each morning, I wake up, and I go and fight for my neighbors. It is my constitutional duty to conduct oversight of the Executive Branch. But, it is my moral duty to fight for my constituents."

Cummings has also drawn the president's ire for investigations touching on his family members serving in the White House. On Thursday his committee voted along party lines to authorize subpoenas for personal emails and texts used for official business by top White House aides, including Ivanka Trump and her husband, Jared Kushner.

The latest comments come as Trump has placed racial animus at the center of his reelection campaign, as he believes his inflammatory rhetoric will strengthen his support among the white working class and attract a new group of disaffected voters who fear cultural changes across America.

The city has struggled with violent crime, with more than 300 homicides for four years in a row. It has crumbling infrastructure and a police department under federal oversight.

Trump's attack on Cummings was reminiscent of one he launched a week before his inauguration on civil rights legend John Lewis, a Democratic congressman from Georgia who questioned the legitimacy of his 2016 election.

Trump tweeted in January 2017 that Lewis "should spend more time on fixing and helping his district, which is in horrible shape and falling apart (not to mention crime infested) rather than falsely complaining about the election results."

And earlier this month, the president drew bipartisan condemnation following his call for four Democratic congresswomen of color to get out of the U.S. "right now," saying if the lawmakers "hate our country," they can go back to their "broken and crime-infested" countries.

His comments were directed at Reps. Ilhan Omar of Minnesota, Alexandria Ocasio-Cortez of New York, Ayanna Pressley of Massachusetts and Rashida Tlaib of Michigan. All are American citizens and three of the four were born in the U.S. The Democratic-led U.S. House voted largely along party lines to condemn his "racist comments."

House Speaker Nancy Pelosi defended Cummings on Saturday as "a champion in the Congress and the country for civil rights and economic justice, a beloved leader in Baltimore, and deeply valued colleague." She added. "We all reject racist attacks against him and support his steadfast leadership."

Baltimore Mayor Bernard C. "Jack" Young fired back at Trump after his attacks, saying he is a "disappointment to the people of Baltimore, our country, and to the world."

"It's completely unacceptable for the political leader of our country to denigrate a vibrant American City like Baltimore, and to viciously attack U.S. Representative Elijah Cummings a patriot and a hero," Young said in a statement.

Democratic presidential contender Kamala Harris, a California senator, said she is "proud" her campaign is headquartered in Cummings' district. "Baltimore has become home to my team and it's disgraceful the president has chosen to start his morning disparaging this great American city," she said.