How soon could Donald Trump return to Twitter now that Elon Musk is in charge? | LiveNOW from FOX

Elon Musk has completed his $44B Twitter take over. Now rumors are swirling about when banned accounts could regain access, specifically the account of former President Donald Trump. Political expert Brian Sobel says Trump's return will be swift, once Musk lifts his ban.

NEW YORK - As he played to a crowd of supporters in Robstown, Texas, former President Donald Trump drew cheers as he talked up his first two runs for the White House — and teased a third.

"In order to make our country successful, safe and glorious again, I will probably have to do it again," he said last month.

That carefully placed "probably" may soon be gone from Trump’s stump speech. Aides to the former president are making quiet preparations for a 2024 presidential campaign that could be launched soon after next week’s midterm elections as Trump tries to capitalize on expected Republican wins to propel himself toward becoming the front-runner for his party’s nomination. 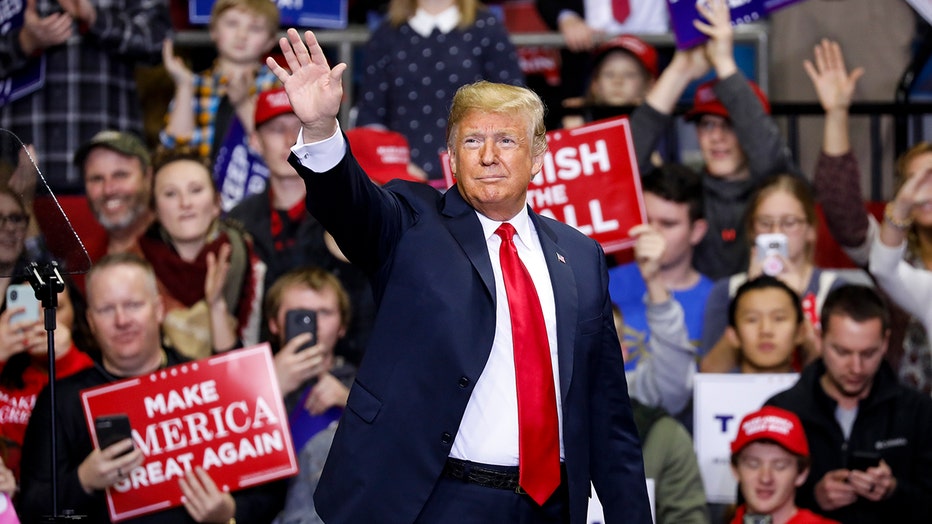 "I’m like 95% he’s going to run," said Reince Priebus, Trump’s former White House chief of staff. "The real question," he added, "is are other big challengers going to run? If President Trump runs, he will be very difficult for any Republican to defeat."

Another campaign would be a remarkable turn for any former president, much less one who made history as the first to be impeached twice and remains embroiled in multiple and intensifying criminal investigations, including probes of classified information held at his Mar-a-Lago club and his effort to pressure election officials to overturn the results of the 2020 election. Trump has a history dating back to the 1980s of publicly toying with White House bids only to back down.

But Trump, according to people close to him, is eager to be back in the political game. While he has been talking up a bid since before he left the White House, aides and allies are now eyeing the two-week stretch after the Nov. 8 midterms as a possible window for an announcement, though they caution that he hasn't made a decision and that — as always when it comes to Trump — things could change, particularly if the election results are delayed due to recounts or a possible runoff election in Georgia.

Indeed, even as discussions are underway about potential venues and dates for a formal announcement, Trump continues to tease the possibility of declaring his intentions at one of the rallies he's planned for the election's homestretch.

The preparations come as Trump has been stepping up his efforts to help midterm candidates in the election’s final weeks, hoping to piggyback off expected Republican gains in Congress to build momentum for his own campaign.

Trump has dramatically ramped up his spending after facing criticism for failing to financially help his favored candidates while continuing to vacuum up small-dollar donations. His newly launched MAGA Inc. super PAC has now spent more than $16.4 million on ads in a handful of competitive states, according to the ad tracking firm AdImpact, with additional investments expected through Election Day, according to people familiar with the effort, who, like others, spoke on condition of anonymity to discuss internal operations.

And Trump continues to hold events to bolster his candidates, with 30 rallies so far in 17 states, along with dozens of virtual rallies and more than 50 candidate fundraisers. His final midterm rally blitz will take him to Ohio and Pennsylvania, two crucial presidential voting states where his endorsements helped candidates secure their nominations. He'll also return to Iowa, which holds the first contest of the presidential nominating calendar.

In total, Trump’s Save America PAC says he has raised nearly $350 million this election cycle for Republican candidates and party committees, including online fundraising solicitations.

While Trump’s team has been identifying potential staff prospects in key states and drawing up paperwork to file should he move forward with an announcement, according to people familiar with the planning, one stressed that hiring has not yet commenced. Trump's campaign, at least in its early months, is expected to remain headquartered in Florida and look much like his current political operation, overseen by the small clutch of advisers he’s fostered since leaving office — reminiscent of his famously threadbare 2016 campaign.

Chris LaCivita, the Republican strategist who was behind the "Swift Boat Veterans for Truth" campaign that badly damaged Democrat John Kerry's 2004 presidential prospects, is working for Trump’s super PAC and expected to take on a senior leadership role in the campaign operation, according to people familiar with the conversations, as is Susie Wiles, the longtime Florida operative who has been overseeing his political efforts.

The 2024 campaign will effectively kick off when the polls close on Nov. 8, and potential challengers have spent months carefully laying the groundwork for their own expected campaigns. That includes Florida Gov. Ron DeSantis, who is widely seen as Trump’s most formidable challenger and who has been cultivating a deep donor network as he runs for reelection.

Trump, meanwhile, faces mounting challenges. He remains a deeply polarizing figure, particularly after spending the last two years spreading lies about the 2020 election. And while Trump remains overwhelmingly popular among Republicans, an October AP-NORC poll found 43% said they don’t want to see him run for president in 2024.

Underscoring that polarization, many in Trump’s orbit had urged him to wait on an announcement until after the midterms to avoid turning the election into a referendum on him.

Others close to Trump remain skeptical that he will ultimately go through with another run, contending that his ego can't take another loss or fearing a possible indictment. Others question whether he will ultimately end up on the ballot in 2024, even if he does launch a campaign.

Campaigns also need staff and Trump's orbit has shrunk considerably over the last two years. Many former aides are expected to steer clear of another effort either because they have broken with Trump, have moved on, or are fearful that involvement could expose them to potential legal scrutiny — and lawyers’ bills.

For someone on the verge of launching a presidential campaign, Trump also remains unusually distracted by legal threats.

There is the Justice Department's intensifying investigation into how hundreds of documents with classified markings ended up at his club in Palm Beach, Florida. State prosecutors in Georgia continue to probe his efforts to overturn the results of the 2020 election, as do the DOJ and the House committee investigating the Jan. 6 U.S. Capitol attack, which recently served him a subpoena demanding testimony.

In New York, Attorney General Letitia James has sued Trump, alleging his namesake company engaged in decades of fraudulent bookkeeping. The Trump Organization is now on trial for criminal tax fraud charges, and Trump recently sat for a deposition in a lawsuit filed by E. Jean Carroll, who alleges Trump raped her in the mid-1990s. Trump denies the allegations.

All the while, Republicans across the country, from high-dollar donors to longtime GOP leaders and rank-and-file voters, have been considering whether they want to stick with Trump.

At a recent Iowa Republican Party fundraiser headlined by Pence, voters praised Trump's time in office but were mixed on whether they want him to mount another campaign.

"I’d like to see him run again," said 81-year-old Jane Murphy, a longtime county Republican volunteer who lives in Davenport. "He makes me angry with some of the things he says. But he gets the job done, plain and simple."

"I think a lot of Republicans are just tired of the drama and the fighting," said Crain, 73. "It’s really wearing. Under their breath, people say it would be nice if he could endorse somebody and go away with grace."