STAMFORD, Conn. - A truck plunged into an inlet from the Long Island Sound at Cummings Park in Stamford, Connecticut, during a powerful nor'easter on Monday, Feb. 1. The storm brought fierce winds and several inches of snow to the tristate area.

"First-arriving fire personnel found a 4-door pick-up truck partially submerged and floating approximately 40 feet off of the shore," Stamford Fire Department Deputy Chief Matt Palmer said in a press release. "A female occupant of the truck was visible and standing in the rear cargo area of the truck. The female occupant was shouting that there was a male occupant trapped inside the submerged cab of the truck. The extreme winds, snow, and tide continued to move the vehicle and cause it to fill with water."

The department shared a video that shows crews going into the icy water to save the motorists.

"The firefighters in the water were able to calm the female occupant and assist her into the tower ladder," Palmer wrote in the release. "As weather conditions continued to deteriorate, the vehicle continued to submerge deeper into the frigid waters of Long Island Sound."

Rescue crews went into icy water at a park in Connecticut to rescue two people from a sinking truck. (Stamford Fire Department via Storyful)

The firefighters tried to pull the man out through the rear window of the cab but the truck finally went under the water.

"One firefighter maintained a physical hold on the man's arm and was able to pull him through the small window after the truck was completely under water," Palmer's post said. "Once he was free, firefighters placed the man into the tower ladder and both occupants were brought to shore."

Stamford EMS evaluated the two people and brought one to Stamford Hospital. 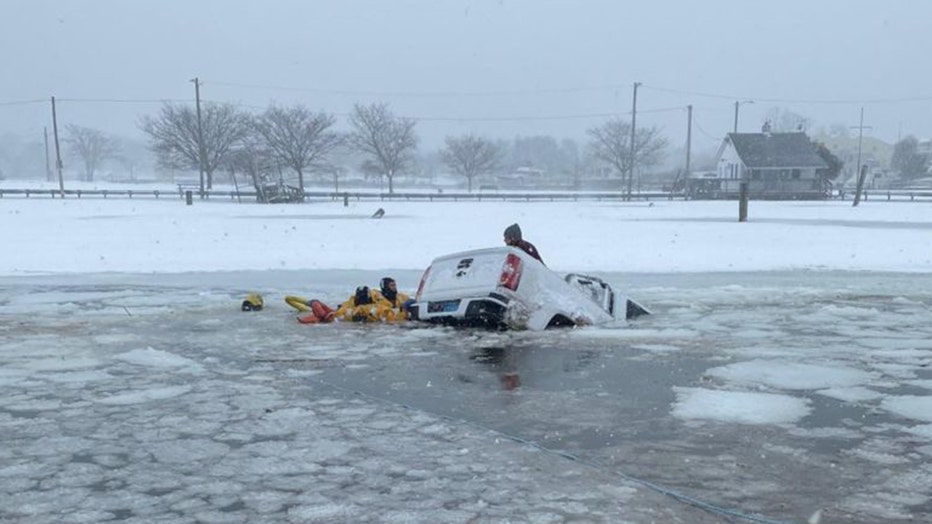 First responders swim out to a pickup truck that plunged into the water in Stamford, Conn. (Stamford Fire Department photo)

Fire department divers went into the water but weren't needed for the rescue. They assisted with removing the truck from the water. The Stamford Police Department is investigating.

Greenwich, a town that borders Stamford, got more than 13 inches of snow around 6 p.m., according to the National Weather Service. 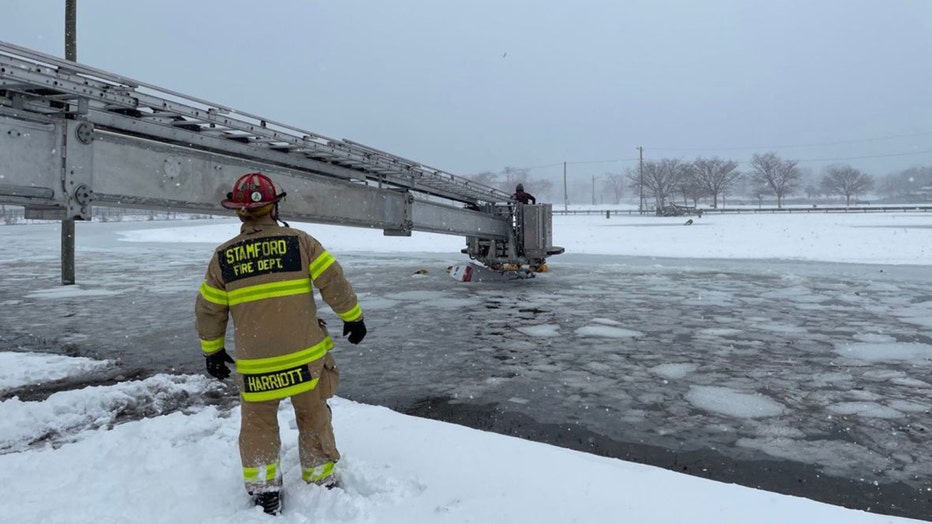 First responders work to rescue two people from a pickup truck that plunged into the water in Stamford, Conn. (Stamford Fire Department photo)