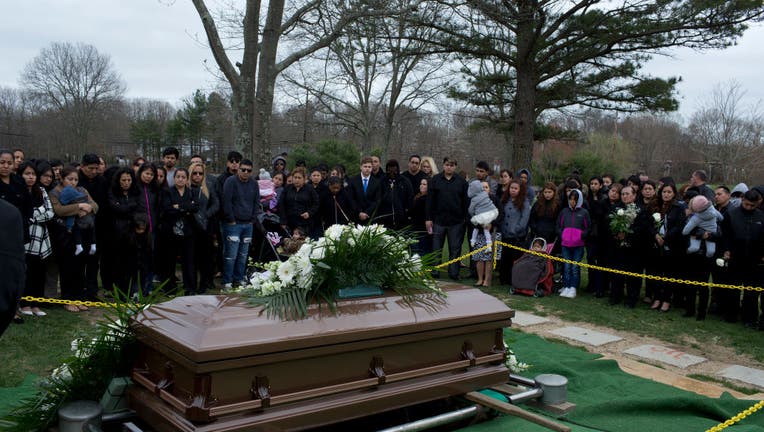 Family and friends say goodbye to Justin Llivicura at his burial in a cemetery on April 19, 2017 in Coram, Long Island, New York. (Photo by Andrew Lichtenstein/Corbis via Getty Images)

CENTRAL ISLIP - A federal jury will hear opening statements Monday in the trial of a Long Island woman accused of luring four young men to their slaughter by more than a dozen members of the MS-13 street gang.

Prosecutors say Leniz Escobar helped orchestrate the 2017 massacre as a teenage associate of the gang before falsely claiming to be a victim in the ambush.

Escobar has pleaded not guilty to racketeering charges in the four deaths that prosecutors described as "a horrific frenzy of violence" involving machetes, knives and tree limbs in a Central Islip park.

Defense attorney Jesse Siegel told The Associated Press that "after almost five years, Ms. Escobar is looking forward to having her day in court."

MS-13 had been seeking to settle a score, prosecutors allege, and believed the young victims to be members of the rival 18th Street Gang. The victims’ families have denied that any of the slain men were in a gang.

Prosecutors allege that Escobar, who was 17 at the time, was seeking to curry favor with MS-13 and alerted its members to the victims' location in a wooden area. Under MS-13 rules, the killings had been "pre-authorized" by gang leadership, prosecutors said, and contributors to the carnage stood to gain membership or ascend the organization's ranks.

Authorities said Escobar later tossed her cellphone from a moving vehicle — as well as a SIM card that had been removed and damaged so badly law enforcement couldn't recover its contents.

"Additionally, Escobar discarded the bloody clothing that she had been wearing on the night of the murders," prosecutors wrote in a court filing.

MS-13, also known as La Mara Salvatrucha, recruits young teenagers from El Salvador and Honduras, though many gang members were born in the U.S. The gang has been blamed for dozens of killings since January 2016 across a wide swath of Long Island.