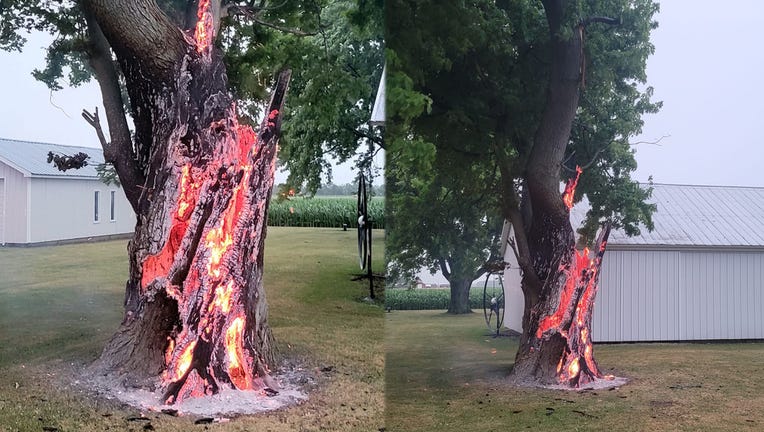 RIDGEVILLE TOWNSHIP, Ohio - Lightning from this week’s severe storms struck a large tree in Ohio, creating an eerie-looking result as the tree burned from the inside.

Firefighters were called early Tuesday to the tree fire in the rural Ridgeville Township, located about 45 miles southwest of Toledo. The Ridgeville Township Volunteer Fire Department shared photos of the tree, which showed glowing, red-hot flames spiraling up the trunk — while the outer branches appeared green and seemingly unaffected.

"Lightning can do some crazy things and we had a tough time getting to every hot spot in this tree trunk," the fire department wrote.

A tree service was called in to help cut it down in order to fully extinguish the fire, according to the fire department.

Other photos shared by fire officials showed the burned tree after the flames had been put out. The tree appears situated on a larger piece of land, near a barn or garage-type structure and a corn field behind it.

Lightning strikes have caused similar-looking results in trees before, and while the appearance may be a bit other-worldly, there’s actually a natural explanation.

There are several myths floating around that many believe to be absolutely true, but here's what the facts say about those myths.

Trees are natural lightning rods because of their height, according to forestry experts at Purdue University — who also noted how sap on the inside of the tree serves as a better conductor than wood.

The temperature of a lightning flash is five times hotter than the sun, creating an internal pressure that can cause the tree to explode from within, Purdue’s Forestry and Natural Resources department states.

A similar phenomenon happened to another tree in Ohio in 2015 that burned from the inside and was later deemed a "devil tree" for its reddish-orange flame inside the trunk.