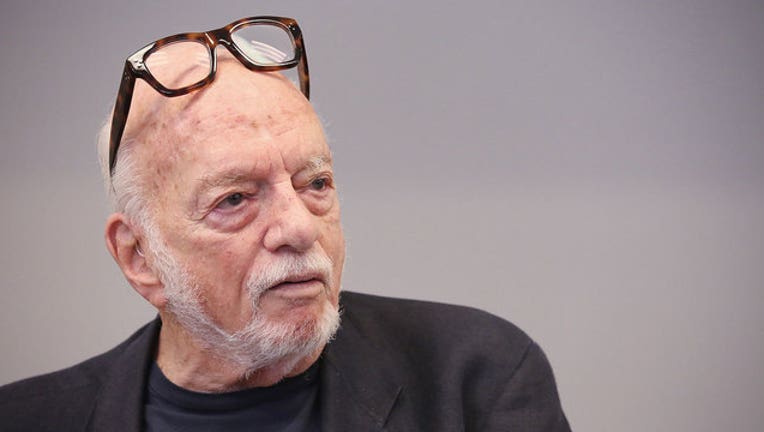 Hal Prince attends the Meet & Greet for the Manhattan Theatre Club's Broadway Premiere of 'Prince of Broadway' at the MTC Studios on July 20, 2017 in New York City. (Photo by Walter McBride/Getty Images)

NEW YORK (AP) — Harold Prince, a Broadway director and producer who pushed the boundaries of musical theater with such groundbreaking shows as "The Phantom of the Opera," ''Cabaret," ''Company" and "Sweeney Todd" and won a staggering 21 Tony Awards, has died. Prince was 91.

Prince was known for his fluid, cinematic director's touch and was unpredictable and uncompromising in his choice of stage material. He often picked challenging, offbeat subjects to musicalize, such as a murderous, knife-wielding barber who baked his victims in pies or the 19th-century opening of Japan to the West.

Along the way, he helped create some of Broadway's most enduring musical hits, first as a producer of such shows as "The Pajama Game," ''Damn Yankees," ''West Side Story," ''A Funny Thing Happened on the Way to the Forum" and "Fiddler on the Roof." He later became a director, overseeing such landmark musicals as "Cabaret," ''Company," ''Follies," ''Sweeney Todd," ''Evita" and "The Phantom of the Opera."

Prince worked with some of the best-known composers and lyricists in musical theater, including Leonard Bernstein, Jerry Bock and Sheldon Harnick, John Kander and Fred Ebb, Andrew Lloyd Webber and, most notably, Stephen Sondheim.

"I don't do a lot of analyzing of why I do something," Prince once told The Associated Press. "It's all instinct."

Only rarely, he said, did he take on an idea just for the money, and they "probably were bad ideas in the first place. Theater is not about that. It is about creating something. The fact that some of my shows have done so well is sheer luck."

During his more than 50-year career, Prince received a record 21 Tony Awards, including two special Tonys — one in 1972 when "Fiddler" became Broadway's longest running musical then, and another in 1974 for a revival of "Candide." He also was a recipient of a Kennedy Center Honor.

He earned a reputation as a detail-heavy director. Barbara Cook in her memoir "Then & Now" wrote: "I admire him greatly, but he also did not always make things easy, for one basic reason: he wants to direct every detail of your performance down to the way you crook your pinky finger."

A musical about Prince called "Prince of Broadway" opened in Japan in 2015 featuring songs from many of the shows that made him famous. It landed on Broadway in 2017.

It was with Sondheim, who was the lyricist for "West Side Story," that Prince developed his most enduring creative relationship. He produced "A Funny Thing Happened on the Way to the Forum" (1962), the first Broadway show for which Sondheim wrote both music and lyrics.

They cemented their partnership in 1970 with "Company." Prince produced and directed this innovative, revue-like musical that followed the travails of Bobby, a perpetual New York bachelor ever searching for the right woman.

Their work together stopped in 1981 after the short-lived "Merrily We Roll Along," which lasted only 16 performances. It wasn't to resume until 2003 when Prince and Sondheim collaborated on "Bounce," a musical about the adventure-seeking Mizner brothers that had a troubled birth and finally made it to Broadway as "Road Show."

Prince was mentored by two of the theater's most experienced professionals — director George Abbott and producer Robert E. Griffith.

"I've had a unique life in the theater, uniquely lucky," Prince said in his midlife autobiography, "Contradictions: Notes on Twenty-Six Years in the Theatre," which was published in 1974. "I went to work for George Abbott in 1948, and I was fired on Friday that year from a television job in his office. I was rehired the following Monday, and I've never been out of work since."

Born in New York on Jan. 30, 1928, Prince was the son of affluent parents, for whom Saturday matinees in the theater with their children were a regular occurrence. A production of "Julius Caesar" starring Orson Welles when he was 8 taught him there was something special about theater.

"I've had theater ambitions all of my life," he said in his memoir. "I cannot go back so far that I don't remember where I wanted to work."

After a stint in the Army during the Korean War (he kept his dog-tags on his office desk), he returned to Broadway, serving as stage manager on Abbott's 1953 production of "Wonderful Town," starring Rosalind Russell.

The following year, he started producing with Griffith. Their first venture, "The Pajama Game," starring John Raitt and Janis Paige, was a big hit, running 1,063 performances. They followed in 1955 with another musical smash, "Damn Yankees," featuring Gwen Verdon as the seductive Lola.

In 1957, Prince did "West Side Story," a modern-day version of "Romeo and Juliet" told against the backdrop of New York gang warfare. Directed and choreographed by Jerome Robbins and with a score by Bernstein and Sondheim, it, too, was acclaimed.

Yet even its success was dwarfed by "Fiddler on the Roof" (1964), which Prince produced and Robbins directed and choreographed. Set in Czarist Russia, the Bock-Harnick musical starred Zero Mostel as the Jewish milkman forced to confront challenges to his way of life.

Prince had gotten his first opportunity to direct on Broadway in 1962. The musical was "A Family Affair," a little-remembered show about the travails of a Jewish wedding. Its Broadway run was short — only 65 performances — but "A Family Affair" gave Prince a chance to work with composer John Kander.

Four years later, Kander would provide the music for one of Prince's biggest successes, "Cabaret," based on Christopher Isherwood's "Berlin Stories."

And it was "Cabaret" that established Prince as a director of first rank. With its use of a sleazy master of ceremonies (portrayed by Joel Grey), the musical juxtaposed its raunchy nightclub numbers with the stories of people living in Berlin as the Nazis rose to power in the 1930s.

"I became a producer because fate took me there, and I was delighted," Prince recalled in his book. "I used producing to become what I wanted to be, a director. (Ultimately, I hired myself, which is more than anyone else would do.)"

As he became more interested in directing, he withdrew from producing altogether.

Among his more notable achievements: "On the Twentieth Century" (1978) and two of Lloyd Webber's biggest hits, "Evita" (1979), starring Patti LuPone as the charismatic Argentinian, and "The Phantom of the Opera," in London (1986), New York (1988) and around the world.

He was a champion of imagination in the theater and tried never to rely on technology to give his shows pop, preferring canvas to LEDs.

"I believe the theater should take advantage of the limitations of scenery and totally unlimited imagination of the person who is sitting in the audience," he told the AP in 2015. "I like what the imagination does in the theater."

He explained that in one scene of "Phantom of the Opera" in London, candles come up at different times thanks to stage workers cranking ancient machinery, but on Broadway that function was automated.

"I would sit in the house and I'd see the candles come up. Something told me that was not as exciting as when the candles came up in London," he said. "So I said, 'Let's make this tiniest adjustment so they don't all come up at exactly the same time.' Now, no one knows that. No one could care less. But it meant something to me."

Prince worked for the expansive Canadian impresario Garth Drabinsky, overseeing productions of the Tony-winning "Kiss of the Spider Woman" (1993), a lavish remounting of "Show Boat" (1994) and a short-lived revival of "Candide" (1997).

Yet there were creative misfires, too. Among his more notorious flops was the five-performance "A Doll's Life," a musical follow-up to Ibsen's "A Doll's House." It began where the play ends, when Nora walks out on her husband. And Prince directed the American production of Lloyd Webber's "Whistle Down the Wind" (1997), which didn't get past its Washington tryout, although the London production, with a different director, had a longer run.

Prince also worked as an opera director, with productions at the Metropolitan Opera House, the Chicago Lyric Opera, New York City Opera, San Francisco Opera and more. And he directed two films, "Something for Everyone" (1970) and a screen version of "A Little Night Music" (1977).

He is survived by his wife of 56 years, Judy; his daughter, Daisy; his son, Charles; and his grandchildren, Phoebe, Lucy, and Felix.