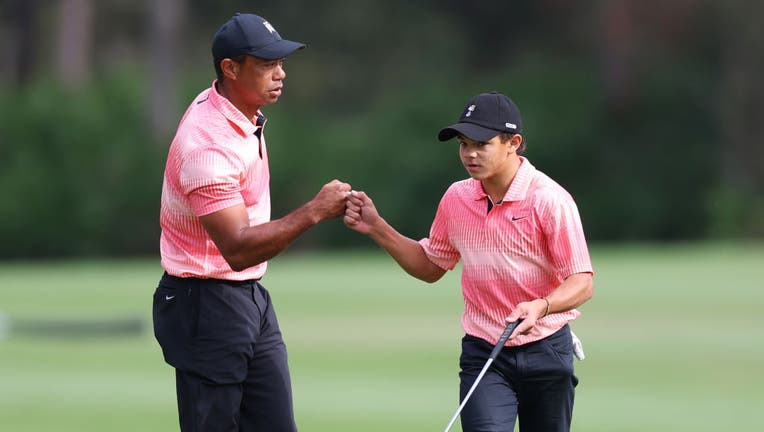 ORLANDO, FLORIDA - DECEMBER 17: Tiger Woods of the United States and son Charlie Woods celebrate on the sixth green during the first round of the PNC Championship at Ritz-Carlton Golf Club on December 17, 2022 in Orlando, Florida. (Photo by Mike Ehrm

Tiger Woods continues to battle plantar fasciitis in his right foot, but that’s not keeping him from golfing with his 13-year-old son, Charlie, during the PNC Championship on Saturday.

Woods is voluntarily sacrificing his recovery back to the PGA Tour because he wants to make sure he is available in moments like this one at 12:17 p.m. ET in Orlando when he teed off with Charlie.

"You know, I don’t really care about that," Woods said, via ESPN, when asked about delaying his recovery following a car wreck outside of Los Angeles in February 2021. "I think being there with and alongside my son is far more important, and [getting] to have a chance to have this experience with him is far better than my foot being a little creaky."

And the elder Woods isn’t the only one fighting through some pain on the course. Charlie also reportedly suffered an ankle sprain that won’t keep him from golfing with his dad.

Woods is allowed to use a cart during this tournament, where he’s paired with Justin Thomas and his father, Mike. But he won’t commit to anything in the upcoming 2023 PGA Tour schedule.

"I’m doing everything," he said. "It’s frustrating, because each and every day I have to do it, and then on top of that it’s trying to sleep in the damn boot. It’s no fun. My left leg is bleeding sometimes, because the boot hits it. It’s just annoying."

TIGER WOODS REVEALS HIS SON, CHARLIE, 13, IS ALREADY OUTDRIVING HIM

It’s the third time that the Woods father-son duo are competing in this tournament. They could have won it last year if it hadn't been for John Daly and John Daly II winning by two strokes.

"Any time I get a chance to spend time with my son, it’s always special," Tiger said. "And to do it in a competitive forum, the last couple of years have been magical."

ESPN added that Tiger’s PGA Tour friends have told him to take it slow, but that’s never really been Woods’ nature. Just last week. he played in "The Match" with Thomas, Rory McIllory, his partner, and Jordan Spieth. It was another friendly match where carts were involved.

However, the plantar fasciitis flared when Woods tried to play at the Hero Wold Challenge in the Bahamas last month, which forced him to exit the tournament early.

Though his schedule isn’t set, many believe that Woods is eyeing a return to the course for the 2023 Masters in April.

Tiger will worry about that later. For now, he’s just focused on Charlie time, and potentially hoisting a trophy at the end of the weekend.