A pair of YouTubers got Carole Baskin to do an interview by using audio clips from Jimmy Fallon interviews.

"Tiger King" star Joe Exotic, who is currently serving time in federal prison for his role in a failed murder-for-hire plot, revealed that he has an "aggressive" form of prostate cancer.

"Doctors called me in today to break the news that my prostate biopsy came back with an aggressive cancer, Carole Will have her own party over this!" his account tweeted on Nov. 3, referring to fellow "Tiger King" star Carole Baskin.

Joe Exotic is a pseudonym for Joseph Maldonado-Passage. He was sentenced in January 2020 to 22 years in federal prison for violating federal wildlife laws and for his role in a failed murder-for-hire plot targeting Baskin — his chief rival who runs a rescue sanctuary for big cats in Florida. Baskin was not harmed.

In July of this year, a federal appeals court ruled that he should get a shorter sentence. Maldonado-Passage has maintained his innocence since being convicted in April of 2019.

"What I need is the world to be my voice to be released. They have the proof I did not do this," Maldonado-Passage wrote in a letter pictured in the post, which was also shared to his Instagram account. "And there is no reason for the district attorney to drag this out so I can go home and get treatment on my own or enjoy what life I have left with my loved ones. Say a prayer, please. Be my voice, please."

The blond mullet-wearing zookeeper, known for his expletive-laden rants on YouTube and a failed 2018 Oklahoma gubernatorial campaign, was prominently featured in the popular Netflix docuseries, officially called "Tiger King: Murder, Mayhem and Madness."

Maldonado-Passage’s team had sought a pardon from former President Donald Trump but did not receive one before Trump left office. His team was so confident in his chances that they had readied a celebratory limousine and a hair and wardrobe team to whisk him away from prison. 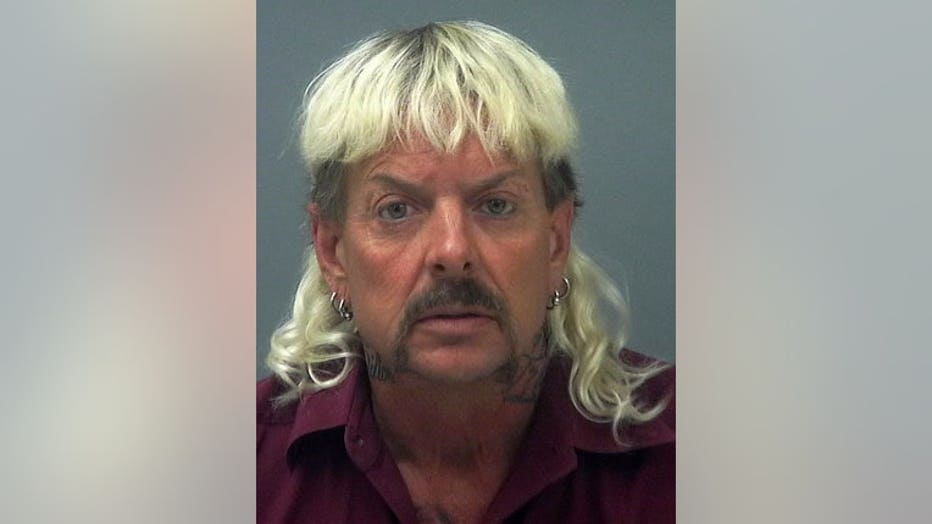 "Tiger King" became a cultural phenomenon in the early months of the COVID-19 pandemic. Its popularity also drew attention to Baskin, who became a household name and claimed Netflix blindsided her by its portrayal of her.

Baskin had tried to shut Maldonado-Passage’s Oklahoma zoo down, accusing the facility of abusing animals and selling big cat cubs. In retaliation, he raised questions about the disappearance of Don Lewis — Baskin’s former husband.

The documentary extensively covered Maldonado-Passage’s repeated accusations that Baskin killed her husband and possibly fed him to her tigers. Baskin, who founded Big Cat Rescue, has never been charged with any crime and released a statement refuting the accusations made in the series.

Meanwhile, Netflix previously announced that "Tiger King" will return for a second season on Nov. 17. In response, Baskin and her husband, Howard Baskin, filed a lawsuit in Tampa, Florida, against Netflix and production company Royal Goode Productions.

Baskin alleged that she only signed release forms for season one of the show and didn’t want to participate in the sequel, according to FOX 13 News, citing court documents. Her legal team called for Netflix to remove all footage of her from the second season before it airs.

A judge later denied Baskin’s request, stating that "the Court is not convinced at this juncture that the Baskins’ anticipated injury — including injury to their reputations — if the previously obtained footage of them is used in the new documentary qualifies as irreparable."