Mother of Breonna Taylor speaks during March on Washington alongside Rev. Al Sharpton.

Tamika Palmer spoke briefly outside the Lincoln Memorial expressing gratitude for those who have called for justice for her daughter.

WASHINGTON - Standing on the steps of the Lincoln Memorial, where the Rev. Martin Luther King Jr. famously laid out a vision for harmony between white and Black people 57 years ago, his son issued a sobering reminder about the persistence of police brutality and racist violence targeting Black Americans.

“We must never forget the American nightmare of racist violence exemplified when Emmett Till was murdered on this day in 1955, and the criminal justice system failed to convict his killers,” said Martin Luther King III, speaking to thousands that gathered Friday to commemorate the 1963 March on Washington for Jobs and Freedom.

“Sixty-five years later (after Till’s murder), we still struggle for justice — demilitarizing the police, dismantling mass incarceration, and declaring as determinately as we can that Black lives matter,” King said. 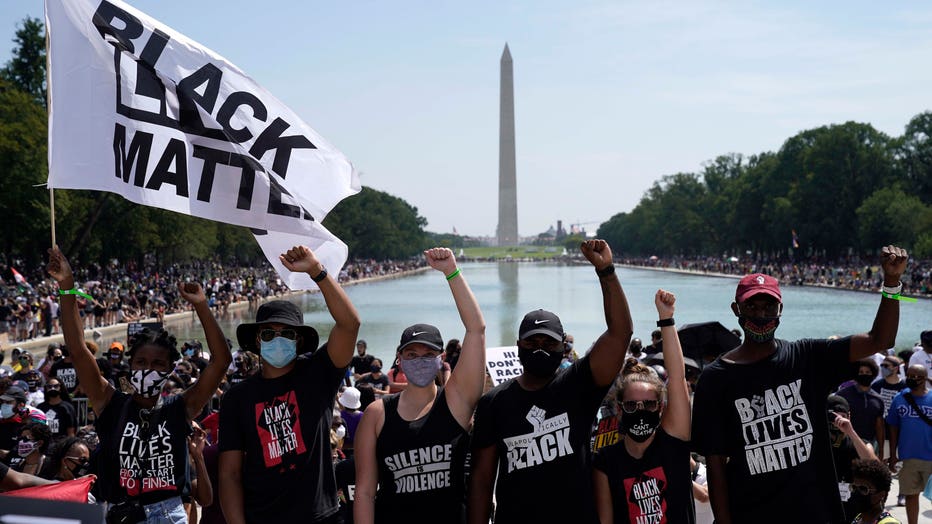 Attendees raise their fists while participating in the March on Washington at the Lincoln Memorial Aug. 28, 2020 in Washington, D.C. (Photo by Drew Angerer/Getty Images)

Even in the midst of the coronavirus pandemic, many felt compelled to join civil rights advocates in Washington to highlight a scourge of police and vigilante violence that gave way to what many feel is an overdue reckoning on racial injustice. Some stood in sweltering temperatures in lines that stretched for several blocks, as organizers took temperatures as part of coronavirus protocols. Organizers reminded attendees to practice social distancing and wear masks throughout the program, although distancing was hardly maintained as the gathering grew in size.

They gathered following another shooting by a white police officer of a Black man — this time, 29-year-old Jacob Blake in Kenosha, Wisconsin, last Sunday — sparking demonstrations and violence that left two dead. As peaceful protests turned to arson and theft, naysayers of the Black Lives Matter movement issued calls for “law and order.” 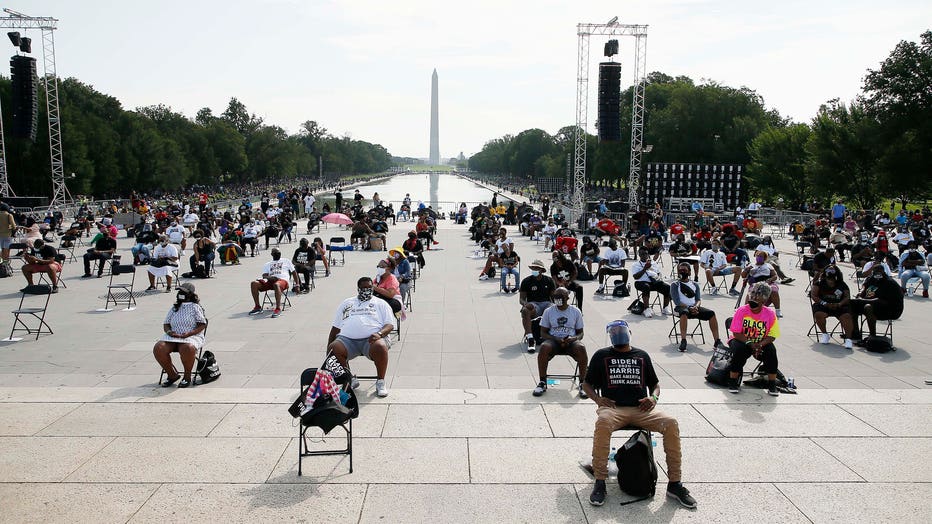 Attendees sit socially distanced at the 2020 March on Washington, officially known as the “Commitment March: Get Your Knee Off our Necks,” at the Lincoln Memorial on Aug. 28, 2020 in Washington, D.C. (Photo by Paul Morigi/Getty Images)

The Rev. Al Sharpton, whose civil rights organization, the National Action Network, planned Friday’s commemoration, had a message for naysayers.

“Some say to me, ‘Rev. Al, y’all ought to denounce those that get violent, those that are looting,’” Sharpton said. “All of the families (of victims of police and vigilante violence) have denounced looting. What we haven’t heard is you denounce shooting.”

RELATED: March on Washington reimagined to comply with virus rules

Arbery and Martin both were killed by white men who pursued them with guns and whose arrests were delayed until residents protested.

“There are two systems of justice in the United States,” said Jacob Blake Sr., the father of the man whose shooting by police in Kenosha left him paralyzed from the waist down. “There’s a white system and a black system -- the black system ain’t doing so well.”

“No justice, no peace!” he proclaimed.

Philonise Floyd, the brother of George Floyd, stared out at the massive march audience and said he wished his brother was there to see it.

Friday’s march shaped up to be the largest political gathering in Washington since the pandemic began. Many attendees wore T-shirts of the late Rep. John Lewis who, until his death last month, was the last living speaker at the original March on Washington for Jobs and Freedom. It went on to become one of the most famous political rallies in U.S. history, and one of the largest gatherings with over 200,000 people in attendance.

Organizers said they intended to show the urgency for federal policing reforms, to decry racial violence, and to demand voting rights protections ahead of the November general election. A handful of satellite marches were held in South Carolina, Florida, Nevada, Utah and Colorado.

Democratic vice presidential nominee Kamala Harris, in a video, said the original conveners would be disappointed that Black Americans are still marching for justice and equality under the law.

“I have to believe that if they were with us today, they would share in our anger and frustration as we continue to see Black men and women slain in our streets, and left behind in our economy and justice system that has too often denied Black folks our dignity and rights,” she said.

Although President Donald Trump did not comment on the march Friday, the Republican National Committee marked the event’s anniversary by highlighting the president’s record as a “champion for the Black community.”

“While there is more work to be done, Donald Trump is the leader to make it happen,” Paris Dennard, an RNC senior communications advisor, said in a statement.

Activist Frank Nitty, who said he walked 750 miles for 24 days from Milwaukee, Wisconsin, to Washington for Friday’s march, spoke to the audience about persistence in the fight for justice.

“Are y’all tired? Because I’m tired,” Nitty said. “They think this is a negotiation, but I came here to demand change. My grandson ain’t gonna march for the same things that my granddaddy marched for.”

Navy veteran Alonzo Jones-Goss, 28, who traveled from Boston to participate in the march, said the nation has seen far too many tragic events that claimed the lives of Black Americans and other people of color, and “that needs to come to an end.”

Following the rally, participants marched to the Martin Luther King, Jr. memorial in West Potomac Park, next to the National Mall, and then dispersed. Some participants headed toward Black Lives Matter Plaza, right outside of the White House, which was renamed from Pennsylvania Avenue during protests in June.

Chants of “Black lives matter” and “No justice, no peace” echoed through downtown Salt Lake City Friday morning, as about 200 people marched from the state Capitol to Washington Square Park for Utah’s March on Washington.

“If people still can’t see why we’re out here and why we’re marching and why people are loud and angry then they’re blind,” said Joshua Chamberlain, a realtor from Holladay, Utah. “There’s racism happening every day and -- especially by police brutality -- people are dying from it.”

“You know and I know what happened to them would never happen to me,” said Bennet, who is white.

Sharpton instructed those in other states to march on their U.S. senators’ offices and demand their support for federal policing reforms and reinvigorated voter protections, in Lewis’ memory.

In June, the Democrat-controlled House of Representatives passed the George Floyd Justice In Policing Act, which would ban police use of stranglehold maneuvers and end qualified immunity for officers, among other reforms. A Republican-authored police reform bill, introduced in June by South Carolina Sen. Tim Scott, who is Black, failed a procedural vote in the Senate because Democrats felt the measure didn’t go far enough to address officer accountability.

In July, following Lewis’ death, Democratic senators reintroduced legislation that would restore a provision of the historic Voting Rights Act of 1965 gutted by the U.S. Supreme Court in 2013. The law previously required states with a history of voter suppression to seek federal clearance before changing voting regulations.

Both measures are awaiting action in the Republican-controlled Senate.