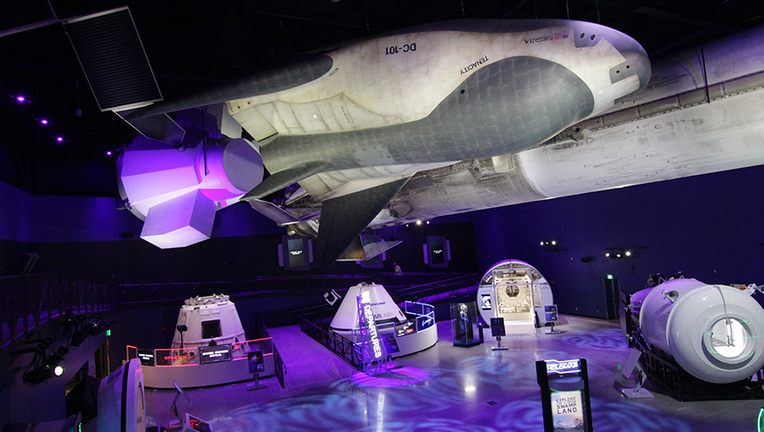 MERRITT ISLAND, Fla. - Walking into the new experience at Kennedy Space Center Visitor Complex is like a gateway to the future of space exploration.

Look down, and moon craters are under your feet. In front of you, NASA’s Orion spacecraft zooms around the moon. Quickly, that all dissolves, and you’ll see the James Webb Space Telescope or Mars or a distant galaxy.

It could be easy to stay inside the colorful entry to the "Gateway: The Deep Space Launch Complex" experience, but that is just a greeting.

The new exhibit opens to the public on June 15, and a preview is available to KSC Visitor Complex pass holders on June 1.

Behind the rocket garden, the 50,000-square-foot attraction is layered with finds on every building level, including spaceflight hardware any space fan would enjoy getting that close up with.

Up close with spacecraft, rockets and engines

In front is NASA's Orion spacecraft built by Lockheed Martin that launched on a test flight in 2014.

"You can see it's still charred up on the thermal protection tiles, similar to the space shuttle," Bohnsack said, adding Orion also has an added heat shield. "When you return from the moon, it's gonna be much, much hotter, so it's going to get up to 25,000 mph and get 1,000 degrees hotter than the space shuttle."

Look up, and a SpaceX Falcon 9 rocket booster that launched on a Falcon Heavy is suspended from the ceiling. The once white booster is covered in soot, showing its spaceflight experience. Also, among the flight-proven hardware at "Gateway" is a Cargo Dragon from SpaceX’s second test flight of the spacecraft in 2012. 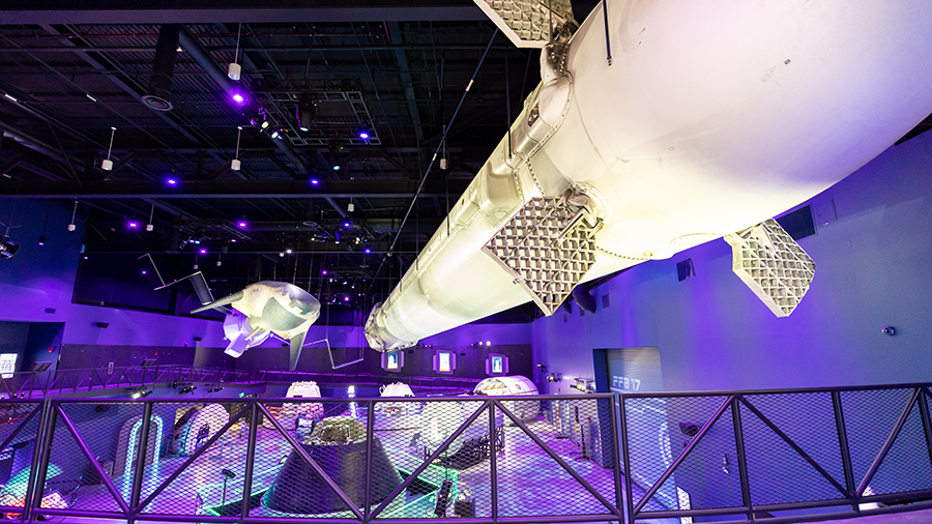 An interactive exhibit of an RL10 upper-stage rocket engine by Aerojet Rocketdyne will challenge your ability to be a flight director. Follow the instructions, and it will fire up; fail to load the fuel at the right time, and it’s "mission failure" for you. (Hint: Read the instructions carefully.)

RL10 Engineer Daimon Clarett estimates the RL10 engine has launched on over 350 missions since the 1970s.

"This is an interactive program showing how the RL10 starts up," Clarett said of the display. "This is an actual engine, it hasn't flown, but this is an exact duplicate of the real thing… this is the real deal."

Boeing’s Starliner spacecraft –not to be mistaken with the one that just landed in New Mexico after its first visit to the space station – is on display, along with a Boeing Blue spacesuit.

A mockup of Sierra Space’s Dreamchaser spacecraft is hung from the ceiling. The company will launch seven cargo re-supply missions to the ISS for NASA in the coming years, and Sierra Space is preparing a human-rated spacecraft to fly astronauts. 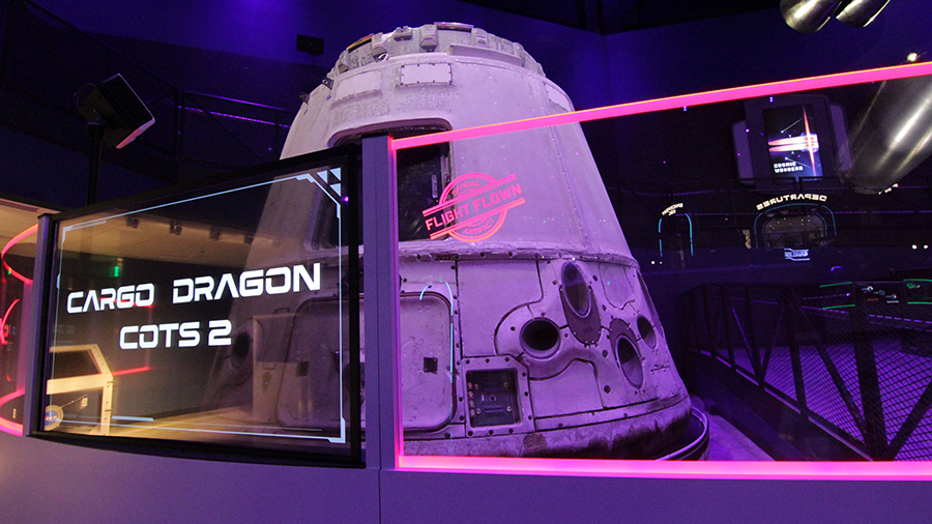 Next, peer into a LIFE habitat - an inflatable mini space station. Sierra Space is partnering with Blue Origin to build a private space station called the Orbital Reef using LIFE and other modules.

"It has three levels that you can see, and it goes from a five-meter (rocket) fairing and expands to something that's almost 30-feet in diameter," said Sierra Space President Janet Kavandi.

Kavandi, a retired NASA astronaut, said LIFE could support up to 10 people at a time. It's possible these space explorers could be private citizens or part of Sierra Space's astronauts.

"I'm also planning to hire our own astronaut corps, which will be professionals that do the job that, today, many of the NASA astronauts do (such as) the repair of the station, the maintenance of a space station," Kavandi said. "Then we will invite researchers, scientists and manufacturing entities to come on board and use our laboratories to manufacture those components that can only be done really well in space. We will train them how to live on the space station, but it will be our professionals that run the station."

Spaceport KSC: The airport of the future

After spending time walking into a space station module mockup or sitting in a Boeing Starliner flight simulator, another experience awaits up the ramp to the Spaceport KSC.

Entering the Spaceport is like going to the airport of the future. Look out the jetway and see rockets launching and space planes landing. Guests can pick between four different spaceflight journeys before strapping in, enjoying a launch, and exploring the universe.

Every seat at the Spaceport is a front seat. The seats rush forward, placing passengers in front of the giant windows of their spacecraft before the launch. The seats rumble, rock and tilt along with the ride.

After your space exploration is complete, it feels almost like a commercial airline. Even fake airline mile credit card offers line the walls when you exit, but so do tourism posters with Jupiter, exoplanets and far-off worlds.

"Gateway" is among the first full-scale experiences at the Visitor Complex to highlight current and future spaceflight technology instead of looking to the past.

Development started in 2017 when NASA was still paying Russia to launch its astronauts to the space station. The commercial space revolution was well underway, but the industry has taken leaps and bounds even in the past five years.

Now, on the verge of having two human-rated American spacecraft to fly astronauts and a mega moon rocket in final preparations for launch, the new experience is opening when a gateway to the next phase in space exploration is finally open.

GET UPDATES ON THIS STORY AT FOXWEATHER.COM