Meet the humanoid robot called Robothespian. He is designed to interact with people even through Skype. Created by England-based Engineered Arts, the Robothespian runs on algorithms and codes, or a form of artificial intelligence. He recognizes people, and sees your emotional state and more.

Humanoid robots are the type of thing that are just the warm-up act for what is coming next in the world of A.I. But first, let's take a step back at just what defines these thinking machines.

For many people artificial intelligence is associated with Hollywood sci-fi like Hal 9000 in the movie "2001: A Space Odyssey" or more recently the film "Her," in which a guy falls in love with his operating system.

In everyday life A.I. is everywhere. We asked Tracey Lall, a doctor in computer science specializing in artificial intelligence for a basic definition. She says in her mind A.I. is systems that exhibit what we would traditionally call intelligence.

From cars that can drive themselves, filtering software utilized by Amazon to predict what you may purchase next, to Apple's voice activated SIRI are all a form of A.I. Like all software now, SIRI can't think on its own, but the advanced recognition technology allows it to intuitively answer questions.

Similarly, IBM's Watson can respond by crunching millions of pieces of data quickly. The results are possible advances in the health industry. And it crushes the human competition on "Jeopardy."

Now researchers are focusing more and more an advanced form of A.I. called deep learning, meaning software programs that won't only sort stored data but will learn to recognize things like photos and faces by mimicking logic, like a human brain just much, much faster. 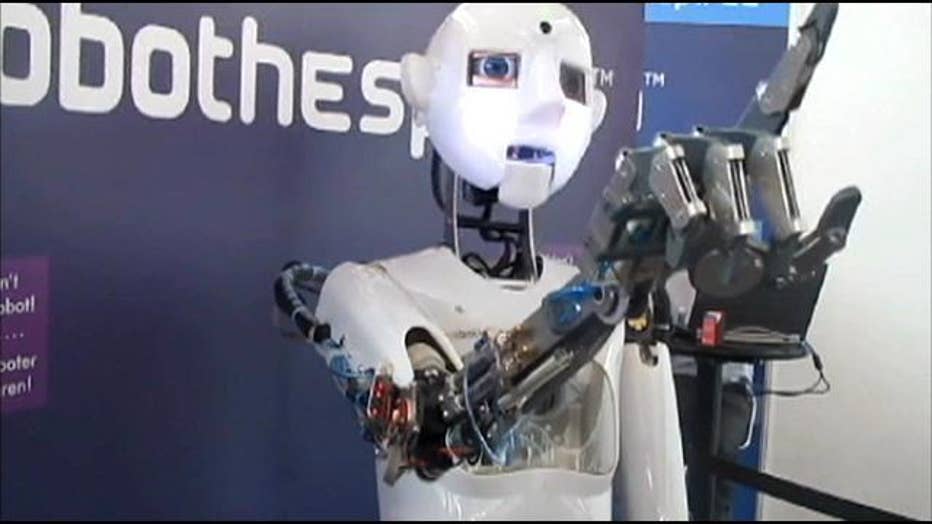 Companies like Facebook, Netflix and Google are all investing heavily in this deep learning technology. Futurist Robert Wald imagines the possibilities.

"What if it starts providing more intelligence for how to do a search or say -- you asked about that last week -- here's something I've noticed," Wald says.

A Google researcher predicts that by 2029 the machines will match human intelligence.

That is a topic that Gray Scott, publisher of online tech site Serious Wonder, has often pondered.

"Imagine a machine that becomes so intelligent that it decides it wants to improve its own operating system," Scott says.

It is a rational human fear that brings us back to that robot. I asked him what he thinks of humans being worried that robots intend to take over the world.

"I would never want to take over the world," Robothespian says. "Politics leaves no time for acting."

Or maybe that's just what they want us to think.